Captain Cliff of the Sourcing Enterprise… Part I 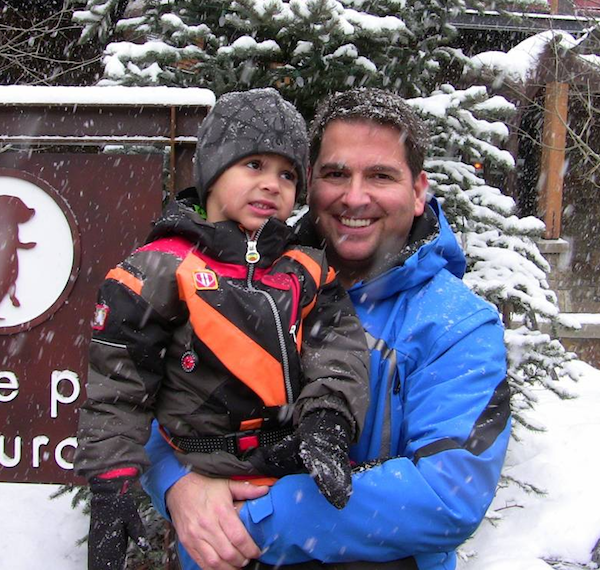 Danny Justice and his dad Cliff, who happens to be Partner and U.S. Leader, Shared Services and Outsourcing Advisory at KPMG

This man is calmness personified.  He’s steadied more ships, weathered more storms, diffused more bombs than, well, practically anyone in the sourcing business.  He’s literally grown up with the industry and today is the most sought-after consultative mind for enterprise leaders trying to figure out what on earth to do with their global morass of technology and business operations.  However, what’s most compelling about this chap, is that he started life flying places, running an emergency-response 911 service, before (somehow) finding his way into the sourcing industry.  In other words, he was already used to dealing with hazardous situations and dealing with hysterical people… on a constant basis.  This was, clearly, highly appropriate training for what he was about to do next…

So without further ado, please allow us to introduce Cliff Justice, KPMG’s very own kingpin of the extended enterprise, who’s calmly building out one of the most impressive collections of experienced sourcing operators and thinkers in the global shared services and outsourcing industry.

Phil Fersht (HfS): Cliff, you were in outsourcing advisory before we were even calling it “outsourcing”. How on earth did you get started in this business?

Cliff Justice (KPMG): In the early 1990s I started a private ambulance company. The idea was to contract with the smaller cities and municipalities in the area to provide them with better technology and services around non-emergency ambulance transportation and emergency dispatch. A year and a half later, my partner and I sold that company to a larger company; so I joined that company, Rural/Metro, as an operations manager.

I performed numerous roles over a seven year period. I was director of marketing. I ended up in Seattle running a multi-state operation providing emergency 911 and non-emergency services to municipalities, healthcare organizations and hospitals. We were an outsourcer, it just wasn’t called outsourcing back then. It was called managed services.

Phil: How did that experience morph into outsourcing consulting?

Cliff: Shortly after that I was part of a consulting firm start-up called neoIT. We helped other companies look at outsourcing, particularly offshoring. We helped large enterprises develop relationships with service providers, put contracts together and assemble the service level structures. We helped them manage those relationships effectively. We formed a partnership with TPI; we went to market together as an end-to-end service around IT outsourcing, business process outsourcing and offshoring.

After I left neoIT, I joined EquaTerra as the head of globalization. We focused on global service delivery strategies. We became well known and had a voice in the market. We showed companies how to globalize their service advantage, manage their services and even improve them through multiple delivery options.

Phil: What were your initial goals when you joined KPMG?

Cliff:  I had the opportunity to come to KPMG in 2008 and start a practice focused on outsourcing. I wanted to leverage the broader capabilities that a Big Four firm had around transformation that the smaller boutiques (the ones I had been a part of) did not have. We created a concept called “Extended Global Enterprise,” which is based on a delivery model concept that our largest clients have influenced. Some of the largest companies in the world have been very successful in applying large, complex and integrated service delivery models, which bring together a mix of shared services, third-party service providers and traditional outsourcing contracts.

Phil: How has KPMG’s practice grown since you arrived?

Cliff:  When I joined KPMG, it had a small sourcing practice focused on helping companies identify services to outsource and then outsourcing them. We put a slightly different team together and focused on a concept that we called “ the extended global enterprise.”

We built the team from 10 people to 65 professionals including myself. That’s when we acquired EquaTerra (see post). We brought in about 250 consulting professionals around the world in 2008 and since then we’ve grown considerably across the globe. In terms of resources, by all accounts, we’re the world’s largest consulting firm in this space.

Phil: Why did you integrate other areas of KPMG into your shared services and outsourcing practice?

Cliff:  To allow us to offer the widest breadth of services. We obviously have expertise in the outsourcing life cycle; we know the process and methodologies of going through the outsourcing process or shared service capability.

But we also have deep functional expertise that we’ve brought into the practice from KPMG groups like our financial management group.  We were able to bring in expertise in various sub-functions and in my view, most importantly, deep industry- specific expertise in industries such as financial services, healthcare, manufacturing, etc. In addition to the functional capabilities, we have IT, accounting, HR, real estate and legal expertise. For example, we have deep knowledge around issues such as accounting compliance and HR issues associated with the transaction and its implementation.

Phil: There’s been some widely publicized criticism that it’s hard for audit firms to do sourcing advisory. Do you find it restrictive in growing your client base in the type of work you want to do?

Cliff: We have robust controls and guidelines around the services that we provide to an audit client. However, there are very few services in sourcing that we can’t provide. We are not operational outsourcers. We are advisors, so we provide advice and offer guidance. We don’t put ourselves in a position that would generate a conflict of interest with our audit clients.

We haven’t found any restrictions that have materially affected our growth.

Phil: You’ve spent a good part of your career in the outsourcing business yourself. What inspired you to write a paper entitled the “Death of Outsourcing”?

So why did Cliff write about the “Death of Outsourcing”?  Well, stay tuned for Part II and he’ll tell you exactly why…

One response to “Captain Cliff of the Sourcing Enterprise… Part I”