By Vinnie Mirchandani on October 7, 2012 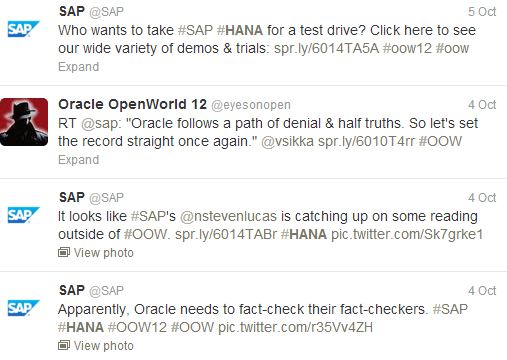 When I met Mark Hurd at OOW this week I complimented the fact that Larry Ellison was so on-message in both his keynotes. Mark smiled, probably thinking back to one point in the Sunday keynote where Larry apologized to Mark, and went off message. It would not be Larry if he did not tell a corny joke or tweaked a competitor in one of his keynotes or quarterly calls.

If anything, I worried if Joe Tucci of EMC was offended by Larry’s cloud talk before his own OOW keynote a day later. Instead it was SAP which blew a gasket. As Dennis Howlett writes, SAP hijacked Oracle Open World twitter hashtags to respond to a Larry comment during his keynote.

In doing so, SAP brought attention to two major facts:

If I were SAP, I would be much more worried: