iPads, Consumption and Creation, and the Future of Enterprise Software 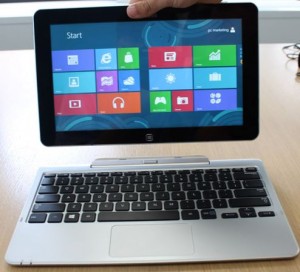 Several months into my experiment with Windows 8 on a Samsung Slate tablet, I now have answers to three important questions about the past, present and future of tablet computing, the so-called post-PC era. They’re questions worth asking, as the answers spell trouble for Apple and Android, and provide evidence of a new lease on life for the troubled PC, albeit a reincarnated convertible tablet/PC like my Slate.

At first blush, the questions may not be what have been bedeviling your IT or line of business decision-makers over the past few years. I admit I hadn’t thought about them or the market in quite that way either. But playing and working with Windows 8 has made me realize more than a few things about PCs, tablets, and what market leadership will mean in these two markets in coming years.

First questions first: Why does the native browser on the iPhone and iPad suck?

It’s well-known that the browser experience on these devices is less than sterling, and that’s without the problem of not supporting Flash. Having spent the last few months using a tablet running a full-fledged browser that is actually optimized to work as a browser (IE 10 on Windows 8, to be specific), I’ve finally figured out what must have been going on in Steve Job’s mind when he decided to limit Safari’s effectiveness on the iPad and iPhone.

Here goes: I’ve noticed over the last few months that the more I use the Slate the less I am tempted to bemoan the lack of native Windows 8 apps for the device (at last count, there were about 3000, compared to a jillion or two for iOS). In fact, it seems that I can pretty much do anything I need to do on my Slate that I would otherwise have done on my iPad.

That’s because it turns out that having  a great browser on the Slate means I can access virtually all the functionality I need from a web page, instead of running a specialized app to perform the task. No need for an app to check public transit, the weather, airplane schedules, my Amazon account, listen to  my local PBS station, check out Twitter, Box, or any other service I have a subscription to. I just point a browser – or better yet a bookmark – and away I go.

Amazingly simple, no? And it’s not like I’m out there mousing and keyboard my way back to the 20th century either. I still having a full tablet user experience, swiping and pinching and otherwise doing that multi-touch thing that Apple pioneered.

Which leads me to the answer to my first question: the browser on Apple’s mobile devices sucks because if it didn’t, Apple wouldn’t have been able to build up its massive apps market. Okay, browser apps would have had to smart enough to do a better job of differentiating form factor (a la HTML5) between phone, tablet, and desktop, and it would have been really hard to monetize a browser-based tablet market the way the Apple Store has helped monetize the Apple Apps market. But fundamentally, if the iPhone and iPad really handled all web sites, supported Flash, and otherwise behaved as well as IE 10 on my Slate, Apple probably wouldn’t be dominating the mobile market through the closed iOS apps store the way it does today.

On to question two: Why is a device designed primarily for consumption the wrong device for the enterprise?

One of the truly great things about the Window 8 experience has been the ability to go back and forth between desktop and touch mode interchangeably. Some of this is a simple matter of using the touch screen to scroll up or down, zoom in and out, and otherwise navigate a document on the screen as part of the creative process. It almost sounds trivial, but it’s really useful. (Point in fact, ergonomics make this work only on a laptop/tablet device: the big touch screens on desktops PCs are too far away from the keyboard to be ergonomically useful.)

Importantly, some of the usability is very much non-trivial. The ability to use Office 2013 in full keyboard mode, typing my little heart out in Word 2013, and then go into tablet mode and navigate to a different desktop app or browse on the windows 8 Metro browser is something I can’t do on an iPad. Indeed, flitting back and forth between multi-touch tablet mode and heads-down keyboard mode turns out to be a significant usability improvement over either pure tablet or, more obviously, pure desktop. While Mac Air users have some of this ability, and those who are good at it can do some amazingly things with the touch pad, it’s not the same has having a full touch screen, not by a long shot.

This experience with the Slate has shown me that creating a demarcation line between consumption devices like the iPad and creation devices like the PC was a “mistake” for the enterprise that served Apple well in terms of creating a new cool device, a new market, and a new revenue stream. But it serves the enterprise much less well in terms of creating an artificial distinction where one need not exist at all. Windows 8 is going to prove that the enterprise customer can have both, and that, unlike two heads, two interaction modes really are better than one.

Which leads me to the final question: why is the real tablet revolution not about mobile at all?

Mobility is a convenience that we have come to take for granted, but we’ve had mobility for decades. I had a laptop in 1990, a cell phone in 1994:  that revolution went mainstream a long time ago. The real tablet revolution was about multi-touch, not mobility, and with that tactile experience we’ve discovered a new way to improve the user experience that, while it found its first mainstream expression on the tablet and smart phone, need not be limited to those devices.

Limited is the word, because the consumption-only, consumer-based design goal of the iPad placed limits on the degree of functionality that could be covered by an iPad app. As I have stated before, it’s somewhat fantastic to think that a CEO could run his or her business on an iPad – there’s just not enough functionality, firepower, or flexibility in this generation of tablet to make that a reality. It works great in sales, relatively good in retail, and self-service HR apps run well in an iPad too. But the artificial barrier of consumption-only means that there are limits, real limits, in what you can really do with these devices.

Which is why I’m actually unimpressed with what I see in the Windows 8 store today, not because it’s relatively threadbare by the standards Apple and Android have set, but because I have yet to find that killer hybrid app that will bridge the creation/consumption divide and show just how valuable a hybrid user experience can be and how limited, by extension, the iPad user experience has been. But it’s coming, inevitably. Cloud pioneers like Box, and enterprise stalwarts like SAP, are looking seriously at Windows 8, and not because they want to make Microsoft happy. They see this experience and the devices it will support as a major new platform for functionality, and they’re voting with their development dollars to bring these new apps to market. Needless to say, but I’ll say it anyway, Microsoft Dynamics is also busy trying to make their offerings fit the “killer app” opportunity with Windows 8.

What does this mean for the enterprise going forward? The most important issue is that software development and the expectations that enterprises have for their user experiences need a quick refresh before too much is invested in buying iPads. It’s not enough to have your vendor promise a killer iPad app to satisfy your mobile user fan base. You should be demanding, and the vendors should be providing, multi-touch-based enterprise apps that can live in the mobile and the desktop world interchangeably. This creation/consumption experience, not the iPad’s consumption-only experience, is the future of computing in the enterprise.

I’ll end on a final note about the next generation of enterprise employee, as personified by my almost 9-year daughter, who so  far in her career has “worked” in Windows XP, Windows 7, iOS, and now Windows 8. Her go-to device today is the Slate, though from time to time she still plays Pet Hotel on the iPad (unless she’s online with a friend, in which case she’s on a PC). Though she doesn’t articulate her preferences with the historical perspective of her father, it’s clear these preferences are formed from the same observation: the Slate and Windows 8 offer all the best of a desktop experience, and all the best of a multi-touch tablet. In her vast experience, and mine –  and one day, I believe, yours –the iPad just doesn’t cut it anymore.

One response to “iPads, Consumption and Creation, and the Future of Enterprise Software”