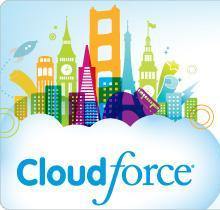 So, just about a month after Dreamforce, Salesforce.com is coming to New York for one of its regional Cloudforce conferences.  The event will be at the Javitz Center in Manhattan on October 19.  Salesforce is expecting six thousand attendees.

The focus of the event is supposed to be on the newly re-announced Marketing Cloud — the amalgamation, so far, of Buddy Media and Radian6.  I will be briefed under NDA about the news to be announced at the event but that hasn’t happened yet so, hey, let’s speculate.

Salesforce already has a bevy of more or less conventional marketing partners in the AppExchange like Eloqua, Marketo and others.  It’s true that these vendors are not monogamous but so what?  They have good connectors and integration and are doing everything they can to carpet bomb, er, I mean cover, the Salesforce installed base so why buy what’s free?

My instincts (which are right about half the time — and less when I’m driving according to my wife) tell me that Salesforce is going in another direction.  The company has always exhibited a Blue Ocean Strategy approach to its business seeking out niches that haven’t been named and I expect it to do the same in marketing.

That means they’ll concentrate on the myriad ways to market in the social world.  If they make an acquisition — and I bet there’s nothing on the radar right now — it will be to beef up social marketing not conventional stuff.  That would mean companies like HubSpot or Awareness or Nearstream or others (some in the CRM Idol contest) that use a healthy dose of new age thinking and social media to access and communicate with customers.

So, what to look for in New York?  In addition to October baseball, I think you’ll see elaboration of the basic message doled out at Dreamforce.  The San Francisco session was packed with information and image-making and there really wasn’t time to unpack all of what the Marketing Cloud means for customers.  I think Cloudforce is the place where the unpacking will happen.

I could be very wrong but that’s what it means to speculate.  Right?