Have you been observing the fascinating scramble going on over in India for supremacy in the IT services space?  By the time this year is out, it’s highly likely that Cognizant will have leapfrogged both Infosys to take the number two spot behind TCS: 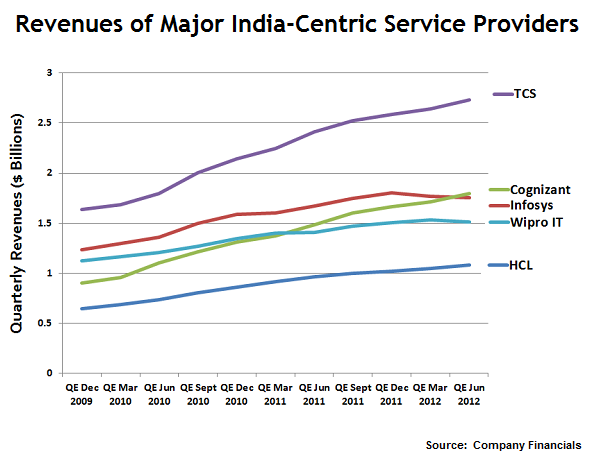 So what’s driving this shifting landscape?

Cognizant’s revenues are being fuelled by organic growth and its ability to penetrate the middle-market. For new business acquisition, we are even seeing it frequently under-pricing Tier 2 providers.  Bottom-line, Cognizant targets the business it wants and sacrifices its margins, when necessary, to win the business.  It has always operated this way and continues to do so, despite its rapidly-expanding size. And it currently has the best sales engine of all the India-centric providers… which kinda helps a lot.

Moreover, having its leadership stationed in the US keeps it closer to the clients, when it comes to marketing, selling and pricing services, in addition to structuring and organizing its operations.  While there are some super-talented leaders based India-side, being so far away from the clients is clearly hurting Cognizant’s competitors in today’s hyper-competitive market. I can’t tell you how much talent has left Cognizant’s competitors, because they weren’t allowed to take on leadership roles in the US.

That being said, Cognizant’s growth is still (by and large) directly proportional to FTEs, and it still hasn’t quite unbundled this link, which will likely hamper future growth.  In needs to “change the wheels of the car while driving” and figure out how to delineate butts-on-seats from client pricing, if it wants to continue this rapid growth story into 2013.  Having said that, we do believe Cognizant is figuring out the connections for the business side with IT solutions quicker than its competitors which are still slow to the game.

Conversely to Cognizant, market leader TCS probably has the least effective sales forces in the big-ticket outsourcing market. However, once you get past the shaky front-end, the firm has one of the strongest service delivery infrastructure of any of these providers – if something blows up, its teams will be all over it, and will leave no stone unturned to bring it back on track. However, if the client doesn’t ask, TCS doesn’t react.  Of the five, it is frequently the the most flexible on pricing and terms, and can probably win any deal anywhere in the world at any price, if it really wants: it depends on what its leadership thinks is important, what its perception of the market is, and what it needs to tell its stock-holders.  TCS is perceived by many today as an alternative provider to the Western Tier 1s, that can come in and fix messy contracts and implementations ; they will pick up a lot of the low margin, low value work that seemingly every Western Tier 1 wants out of.

Not only that, TCS is having much more success de-linking the direct correlation of revenues from FTEs: the firm has a laser-sharp focus on managed services, fixed price projects and has successfully monetized its product group. The sheer size of its referenceable client base and the executive connections of its leadership, is a huge strength.  In addition, its tunnel-vision on developing its platform-based solutions is really helping the firm move gradually away from the FTE-pricing model.

Wipro and Infosys, on the other hand, seem to have just lost their mojo over the last couple of years, which is directly linked to the changes at their top, and the time needed to development its new leadership talent to take them forward.   In addition, many new customers are saying “Why do we need the Cadillac when a regular Chevy will do just fine?”.  A lot of client requirements are straightforward and easy-to-service with low-cost resources.

In short, both have struggled to articulate a renewed vision for the future of IT services to encourage clients to choose them over some very, very aggressive competitors.  However, we at HfS have noticed marked attempts by both firms to bolster their fortunes with a much more assertive series of communications to market. There is a clear determination to roll out new platform solutions, and a more consultative client approach that can move them up that value pyramid, which comes in so many nice new colors and 3D views, in the new version of PowerPoint.  I would also point out that these providers are not doing badly – they are simply being outpaced by the Cognizant and TCS machines, in a commoditizing market that is slowly losing steam.

HCL is the proverbial odd one out in all of this – it had lost its focus on outsourcing until about 3-5 years when it hired in some new leaders to refocus the company. Its clear strength is in infrastructure services – borne from its past relationship with HP. Today, the firm is growing largely due to the sheer number of unconventional deals it is contracting, in addition to its aggressive pricing which is becoming a popular topic of discussion between sourcing heads. Plus, the firm has a very aggressive sales engine.  It kinda reminds me somewhat of Cognizant five years’ ago in terms if its size, thin management layer, and incredibly personal approach to client service – from the CEO and his immediate team.

HCL is another example of an Indian-HQed firm that will pick up on the poor quality provided by  WesternTier 1s.  However, the firm does need focus, polish and business development leadership to get to the table. Its operations and infrastructure team resonates well with clients, but tends to get way too far in the weeds during initial sales pitches. It needs to avoid trying to solve all the client’s problems within the first 30 seconds of meeting them.

The Final Word:  The IT services industry has reached a bifurcation point and not everyone will stay the pace

Ask an analyst to write about what differentiates IT services providers in today’s market and you have to get right into the weeds to come up with the answers.  My conclusion is simple:  both Cognizant and TCS are outpacing the Indian-centric IT services market.  And both are very different firms – Cog very sales and pricing focused, TCS very solution focused.  They’ve left Wipro and Infy a little stunned, to be honest, and they are having to go though some major changes internally to try and keep pace.  However, the market at the low-end is very commodity driven these days, and there simply isn’t the room for all these providers, let alone the dozen other major providers, HQ-ed outside of India.

Everyone wants to grow exponentially at 20%+ a year without having to make radical changes to their business models.  I predict the future is going to be less about selling the low-end work, but the more complex IT-enabled business processes that are specific to industries.  Hence, the investments the providers need to make are going to be in more consultative talent and specific technology IP.  And you can’t find all of that for cheap rates in a third-tier Indian city… these guys are going to have to look at more inorganic growth in onshore providers, clients and technology firms.  The bifurcation point has now been reached, it’s time for  these providers to make the necessary investments to continue their growth journey, or they can start look at some rather interesting case studies of providers in the Western world who failed to keep up with the times.

One response to “Who’s rising above the W-I-T-C-H hunt?”