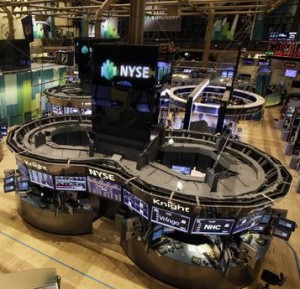 Well, the good news, as I survey the neighborhood on the day after is that we survived.  Boston had its moments with more than a quarter million homes without power, but it is nothing compared to the reality of New York City and environs.  We were relatively lucky on this one.

As I write this I am surveying articles about flooding in lower Manhattan and a curious story in the Wall Street Journal has me thinking.  The NYSE was closed yesterday for the storm and today it will be closed again according to the story but curiously, the exchange is denying there has been any damage to the trading floor as in,

We stress that, as of now, there has been no damage to the NYSE Euronext NYC headquarters that would impair trading floor operations,” exchange officials said in a notice to traders.

Perhaps the data centers where all the clearing goes on were not as fortunate? The article goes on to discuss contingency plans.  Whatever.

Maybe the exchange has done a bang-up job of contingency planning for just such an event or maybe it was looking forward to the complete melting of the ice caps.  Whatever happened, and for whatever reason, the exchange is not operating today.  Hurricane Sandy has provided a vivid demonstration to many powerful interests of the greater power of nature and it has reminded us that no one is immune to nature’s fury.

All this comes at a time when Americans are believing more in the assertion of global warming by scientists.  A new report published in October by the Yale Project on Climate Change Communication had the following findings, published in the LA Times,

Interestingly, the 57% who said they believed in global warming is a rebound number.  It was as high as 71% in 2008 just before the financial meltdown.

If there is a silver lining to any of this, and you might need to have a pretty tough exterior to say or believe this, it might be a changed attitude in the ranks of the Masters of the Universe especially the climate change deniers who would have much to say about taking effective action because it costs money.

Now that Wall Street is closed for another day, just as a precaution you see, perhaps powerful people will take a moment to reflect on their positions.