Apple’s flanking move with iPad Mini and life after Steve 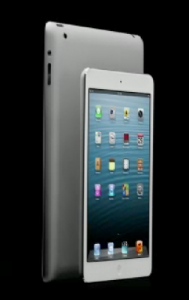 Last week’s Apple event has been widely reported in detail, but with a minimum of real analysis on the importance of the why, the how and the what being communicated.  For me there were three significant aspects:

Plenty of reporters and commentators presented most of the facts and the numbers corectly, misunderstood the pricing of the new iPad Mini thinking it too high, and then made the mistake of missing the .9 after the 7 in the size of its screen.  So much technlogy reporting these days seems repetitive, regurgitating the technical specifications and processor chip models in the press release with little analysis and thought of what the technology is for, how well it will work and how people will use.  That’s a topic for another post.  Let’s talk through the announcements.

Tim Cook (CEO and the man Jobs hired in 1998 to clean up Apple’s manufacturing and supply chain) and Phil Schiller (SVP World Wide Marketing and the guy who had the idea to use a scroll wheel on the iPod) did the talking on stage, with (Sir) Jony Ives (SVP Industrial Design and a key influence from the iPod project onwards) appearing on video.  No one was wearing a black turtleneck, but there is no doubting who set the scene and the tone.  Tim told us that the iPhone 5 is the fastest selling phone ever, and then went on to tell us one of the most important, but little discussed, aspects of Apple’s success in the mobile device market.  They try hard to make it possible that as many devices as possible run the latest version of their operating system.  They told us there are 200 million iOS 6 devices already – an operating system that had only been available for 34 days!  This is a powerful message and a big number.  Even someone with an iPhone 3GS, 3 generations of hardware back from the 5, gets to run the current software.  It’s the same for my iPad 2.  Of course the processors on these earlier devices aren’t fast enough to do absolutely everything, but other device manufacturers build in redundancy, even when using Android, and force their users to continually upgrade to the next handset (or tablet) in a way that Apple does not.

They explained that the Mac is the #1 desktop in the USA and the #1 notebook in the USA and went on to announce new thinner versions of the iMac and and a 13 inch version of the MacBook Pro with retina display.  These don’t bother with CD drives in this new world of the Cloud and the download.  They went on to talk about a new hybrid flash/hard disk – the “fusion drive’.  All well and good for the desktop and laptop market, but I was really interested in what was coming next. 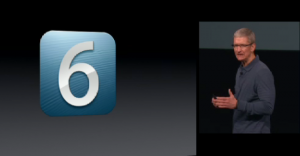 You have to remind yourself that the iPad was only announced in April 2010.  100 million iPads have been sold in just 2.5 years.  There are 275,000 apps available now in the app store – that’s quite an ecosystem.  They explained that more iPads were sold in Q2/2012 than PCs from Acer, Dell, Lenovo, and HP.  There are other tablets, but what are they being used for?  Apple have looked at the overall tablet web traffic – iPad has a 91% share, with only 9% for all of the rest (all manufacturers in all sizes). That’s consumers, what about use in business though?  They explained 94% of Fortune 500 companies are either testing or using iPad.  That’s what you might call a market leading product!

What do you do when you’ve got a fantastically successful product that’s in the lead?  You make it a bit better to extend that lead.  Only 6 months after the announcement of the 3rd generation iPad with retina display they announced the 4th generation.  They doubled the speed of the processor, improved the front camera, expanded LTE so the device supports 4G here in the UK, and added the new lightening connector to replace the 30 pin connector, but all maintaining the same 10 hour battery life AND the same price.  Now the timing of this update has been criticised by some people who only just got the 3rd generation device.  They feel cheated somehow. I sort of get that, but not really.  My wife is using my iPad 1 – it’s still a great device.  My daughter and I are ecstatic with our iPad 2s (except for maps!).  The 3rd gen iPad was announced back in March.  In June a CIRP report found that iPad 2, which Apple continues to sell even now, comprised 41% of all of Apple’s iPad sales.  The report also indicates that previous iPhone models are still strong as well.  27% of all iPhone sales were for models other than the then current model iPhone 4S.  If you really want the latest version, you’ll be able to get a pretty good price for your 3rd generation iPad device, because it’s still pretty awesome even though a slightly better one has come along.

At this point in the presentation the new iPad Mini slowly appeared from behind a full size iPad.  Apple do this kind of reveal so well.  The Mini is 7.2 mm thin, weighs .68 Ibs which is 53% lighter than the iPad and has a 7.9 inch screen.  Most of the pundits seemed to have missed that .9 after the 7.  This is an “8 inch” tablet, not a “7 inch”.  There is a reason for the size difference and this is Darwin’s theory of evolution applied to product categories (read The Origin of Brands by Al & Laura Ries).  Product categories don’t converge, they diverge.  Apple are actually flanking the low cost 7 inch tablet market that Samsung, Google and Amazon are playing in with a premium product in a new sub-category just next door to their battleground.  Schiller explained the reasons for the size difference:

He went on to compare it to one of the current 7 inch Android based tablets.  The Mini is made of aluminium versus plastic.  Even though this other device has a smaller screen it’s thicker and heavier than the Mini.  He compared the Android’s screen size of 21.9 square inches versus 29.6 – that’s 35% larger for the Mini.  What about surfing the web?  They showed the actual real estate of a visible web page without the surrounding framing, tabs and noise – the Mini was 49% larger for surfing portrait, and 67% larger in landscape.  He suggested these other (Android) apps were phone apps stretched out, not specifically designed for a tablet and demonstrated that by comparing the user experience for Ebay, Pandora, and Trip Advisor across the two.  It highlighted that this “8 inch” tablet really is a different form factor and category of device.

I’ve seen some pundits suggest the screen display “lacks Apple’s crystal clarity” or is “noticeably worse than its rivals“.  Rubbish (although I would have preffered a word beginning with B)!  These commentators are calculating the number of pixels per inch and focussing on the arithmetic.  The iPad 2 screen experience had a wow factor when it was announced such a short while ago.  This new device has the same resolution on a smaller screen and so characters will be a bit sharper.  It’s the user experience in practice that is much more important than the numbers and specifications that the average technology journalist and blogger seems to fixate on.

They showed a video of Jony Ives talking through the design of the new device.  He suggested there is an inherent loss in just reducing a product in size.  He explained the new iPad Mini is a ground up internal redesign of all components to make it a concentration of, and not a reduction of the original (iPad 2).  They decided that 7.9 was the right screen size (in other words the lowest they could go to achieve the equivalent user experience) but they needed to reduce the borders so you can pick it up in one hand.  They have produced their largest and thinnest single cell battery so that it still has the 10 hour life of the rest of the range.  They’ve made it “incredibly thin and light with remarkable levels of fit and finish”.  It looks gorgeous.

Lastly, the price – the entry level model is $329 in the USA and £269 in the UK with the same capacity, wifi and cellular options as its 9.7 inch big brother.  It fits well in to a range where the larger iPad 2 (which still sells well) starts at £329($399) and the iPad 4th generation starts at £399($499).  Some pundits have suggested it’s too expensive compared to the Kindle Fire HD or the Google Nexus 7.  It’s a different category to these devices.  Some pundits have suggested that they should have priced it lower to kill the competition.  They’re missing the point.  Pricing it lower would kill Apple’s margins and profitability, they’re leaving that low cost space to somebody else.   Jobs said that the 7 inch form factor is not a good size for tablet applications and you would need sandpaper to file your fingers.  Of course he has misdirected before, when he suggested video wouldn’t come to the iPod, and then it did.  Actually Apple are saying this new “8 inch” category is the smallest they can go whilst keeping the iPad experience that customers love and have got used to.  They are flanking the low cost products on a new front, and maintaining their strategy of beautifully designed products at a premium price.

I’m reminded of a Steve Jobs sentence from a Wired article from 1996 when he said:

That spirit shows in the new iPad Mini.  When I look at recent Android tablets some of them look great, they feel a little too complicated and geeky, but many of them fall down in the details.  When I look at the various Chrome Books that Google have launched, the concept is great but it doesn’t feel like a completely finished product.  When I look at the current Samsung range of products, from the 5.3 inch Note 2 to the Tab 2 10.1 I see a much more coherent range with a greater attention to detail – they are the real challenger.   But the Apple experience in design and attention to detail is a level above these competitors.  These new iPads will be hugely successful, very profitable and maintain Apple’s stamp of authority and lead on the tablet market.  When you see analysts talking about total tablet market share percentages, please take care with these raw numbers and look to the growth in actual numbers of units and profitability  There is an area of the battlefield which Apple is avoiding strategically because they are sticking to higher ground.