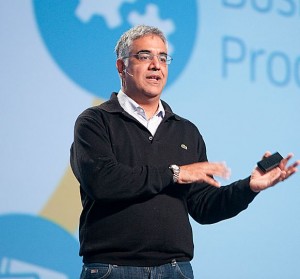 It was a striking sight. It was end of day in last week’s Technology Summit after Workday had showed us countless demos of new functionality, when under non-disclosure they announced plans to develop a Recruiting module. It would be next-gen, not just applicant tracking, but would allow for candidate identification through  traditional and social channels, new interview and vetting techniques, allow for processes to keep them “warm” through the pipeline,  facilitate the on-boarding if they decided to join.  Pushing the envelope in many ways.

What was remarkable was not the “wows” from the audience but a hostility that Workday was actually announcing something it had not coded, put through the early adopter process. I felt compelled to defend Workday “Come on – they showed us plenty of available product. This is an exception. Besides, did you guys challenge Hasso Plattner when he started talking about in-memory analytics four years ago?” I was going to add “and Larry Ellison when he announced Fusion eight years ago?”

Aneel Bhusri, co-CEO,  defended the announcement as an aberration. Too many customers were asking for  the functionality and too many rumors were floating about what it would include. So we are making an official announcement (he did in his keynote the next morning)

In many ways, I was proud  of my colleagues for their reaction. Gone are the days where software executives could pre-announce years ahead and freeze competitor products. Oh,  it still happens today via small acquisitions that vendors then hype up as proxy for a market they need months or years to properly develop functionality for.  But in general, we are seeing a decline in vaporware announcements.

Of course, watching Aneel present the next morning, I envisaged in a not too distant future, his announcing some blockbuster new functionality ( a commerce engine, a new vertical app) and the audience breaking out in cheers. Even better when they sign on to their Workday system in their hotel rooms that afternoon, the functionality is live. And even more awesome, the next morning they line up like people do for a new iPhone  to a Workday Genius  Bar where they  get tutorials on the new  functionality. And at lunch, the buzz is all about the new functionality. It’s what Dave Duffield calls “the power of one” – everyone on the same release so the customer sharing is much more vibrant at his events.

That day is not too far off. Maybe by Workday version 24 – which at current pace is 2 years away. Hey if Tim Cook and Jeff Bezos can show off a prototype of a new device and consumers can have it in their hands a few weeks later, so can enterprise technology CEOs. And I would be perfectly happy to speculate what Workday will deliver in 25, 26, 27 just like hordes do about front cameras and processor speeds expected in rumored Apple or Microsoft or Amazon products.

I get boosebumps just thinking about that possibility. For too long in enterprise tech we have waited years for an announced product then waited another few years to have that deployed across the customer base.