It has been awhile since I provided an update on our firm, the overall venture capital investment environment and some of the areas where we will be looking to invest during 2013. We recently met with our SaaS and Internet advisory boards so it was a good time to reiterate our firm’s investing posture, assess the performance of our SaaS and Internet portfolio companies, and discuss our more recent investment focus.

Our firm continues to grow.  We recently hired a new partner, Gus Alberelli, to strengthen our late stage investment team, as well several associates to add to our sector teams.  We continue to invest out of our 7th fund having just passed the half way mark and we have already started thinking about our next fund.

The last few months continued to mark the evolution of the venture industry both in terms of the firms that are actively investing and raising new capital but also in the types of investments that are being made.  Since the beginning of the year we have considered a very large number of investment opportunities; maybe even larger than we typically see during a similar period.  Angels, super-angels and early stage VCs have continued to be very active investing in companies raising their first capital as well as in earlier stage companies looking to raise their first truly institutional round.  Just during 2Q12 alone $1.1B was invested across 282 deals, representing 15% of all dollars invested and 31% of all deals done.  During 2Q12 we saw $7B invested in 898 deals, down 7% from 2Q11.  We feel that during 3Q12 investment sentiment went up again and we see a similar pattern for 4Q12.

We continue to see a decrease in funding to consumer Internet companies, but a significant increase and focus on enterprise models, particularly around software, which is at a 10 year high.  Starting with 2011 but also during the first 3 quarters of 2012 we saw a strong increase in investments around social for the enterprise, mobile, where we saw a YoY increase of over 50% in investments, a renewed interest in adtech and marketing technology, and accelerating investment interest in companies with big data solutions, where $1.1B has been invested to date in 60+ companies. Cloud computing has become table stakes in these opportunities.

The broad set of US venture firms continued to have trouble raising new pools of capital.  We are seeing 100-120 funds being able to consistently raise new capital, invest it and have exits.  This is a much smaller number of the funds that are registered with the NVCA (450) and continues to drive the separation of the “haves” from the “have-nots.”  During the 1H12 82 funds raised $13B, 31% increase over 1H11.  The top 5 funds raised 80% of the $6B that was raised during 2Q12.  We are also seeing, what I believe to be, a return to normalcy with firms that are focused on early stage investments raising smaller funds, ($100-250M), and multi-stage firms raising larger ones.

While we appear to be returning to normalcy regarding number of venture firms and size of funds, we are still in unreal territory regarding valuations.  During 2012 it became apparent that VCs are willing to pay up for top line growth and for companies that have established leadership positions in spaces that are considered important.  While it appears that in sectors such as social we have reached the peak of inflated expectations, we have nonetheless been extremely surprised at the valuations achieved by companies that have consistently demonstrated this growth (50-100% yoy growth) and demonstrated escape velocity in revenue ($15-20M+).  Recent examples include Quirky, Klout and Zendesk. 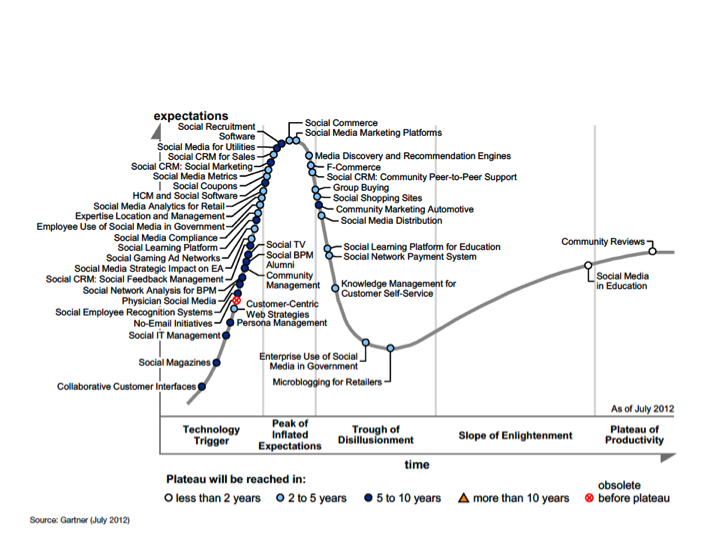 We are on a pace for about 55-60 IPOs this year, a similar number to last year.  However, while the number of IPOs was flat, the amount of money raised was up (primarily because of Facebook). SaaS IPOs did well this year with Workday leading the way.  Trident’s SaaS portfolio company Qualys had a very successful IPO a few weeks ago.  Moreover, the SaaS companies that went public are trading well.

M&A of venture-backed companies is up slightly during 2Q12 with 110 deals, resulting $13.6B up from 98 deals worth $12.7B in 1Q12.  Four of Trident’s software portfolio companies were acquired thus far this year.

We remain concerned at the lack of several (as opposed to just a few) significant exits in the Internet space.  We recognize that the space is full of point solutions and that few companies will be acquired by a relatively small set of acquirers.  We are also concerned that in our recent discussions with corporate development officers we heard of their desire to make acquisitions in the $30-100M range but not higher, intimating that they are not willing to pay high revenue multiples for the companies being acquired.  Finally, as we consider the universe of potential acquirers in the internet area we recognize that Google and Adobe have largely completed their buildout, Akamai appears to have slowed it down (or even abandoned it), Facebook is building internally or is looking for partnerships, at least for the time being.

While adtech has not produced many exits, certain adtech sectors (DSP, SSP, mobile, video) continue to grow fast and are starting to attract public market interest. Millennial Media’s successful progress as a public company is a big contributor to this interest.  We expect to see stronger IPO and M&A activity during 2013 and 2014, particularly in Demand Side Platforms, Supply Side Platforms, video and mobile.  These are the adtech sectors where Trident has invested heavily and our portfolio companies Turn, Brightroll, Exelate and Appia are considered leaders in their spaces.

We have also been encouraged by the recent interest of IT vendors, e.g., IBM, Oracle, Salesforce to accelerate acquisitions of marketing technology companies (Buddy Media, Vitrue, Coremetrics).  Our social marketing and commerce portfolio companies Extole, 8thbridge, ThisMoment, and Pivotlink, our marketing analytics investment, are expected to benefit from this trend.

In the big data sector during 2014 we may also see 1-2 IPOs, particularly of big data infrastructure companies, but we expect that the best of these companies to exit via acquisition.

Corporate VCs are aggressively re-entering our ecosystem either by establishing new funds and locating in our area, e.g., American Express established a standalone $100M fund, or by investing in venture funds and participating in individual financings, e.g., Walgreens.

Trident remains focused on companies that provide software, Internet and technology-enabled services centric solutions to the mid-upper enterprise and the global enterprise using B2B and B2B2C models.  We differentiate ourselves through our areas of expertise that obviously include SaaS, adtech and mobile, big data and business analytics, as well as security and healthcare IT.

During 2012 we have slowed our typical investment pace because we are concerned about the overfunding of several sectors of interest, and the very high valuations being offered by investors and expected by management teams.  We have been focusing on companies that have reached the expansion and growth stages.  We have walked away from several opportunities where the company may be doing extremely well but where we couldn’t find a way of making money under the terms expected by their management teams.  As a result, since the beginning of the year we have invested in Mocana (mobile security) and ThisMoment (social marketing and rich media content management).  Presently, we are also waiting to receive feedback on four term sheets we have recently submitted.  We expect that we will be able to close at least 2 of these investment opportunities before the end of the year.

Our portfolio continues to perform well with most companies achieving at least 30%+ YoY growth.  Our earlier stage SaaS portfolio and most of our adtech portfolio companies have been able to grow 100% YoY.

Over the past couple of years we have had three distinct investment theses: social for the enterprise (social meets SaaS), adtech (SaaS platforms for ad-driven Internet monetization), and mobile applications for the enterprise.

We remain very excited about these sectors because of:

As a result, our overall investment thesis is evolving.  Rather than looking at these sectors in isolation, we are looking at models that bring together Cloud, Social, Mobile and Big Data and monetize through advertising or commerce. 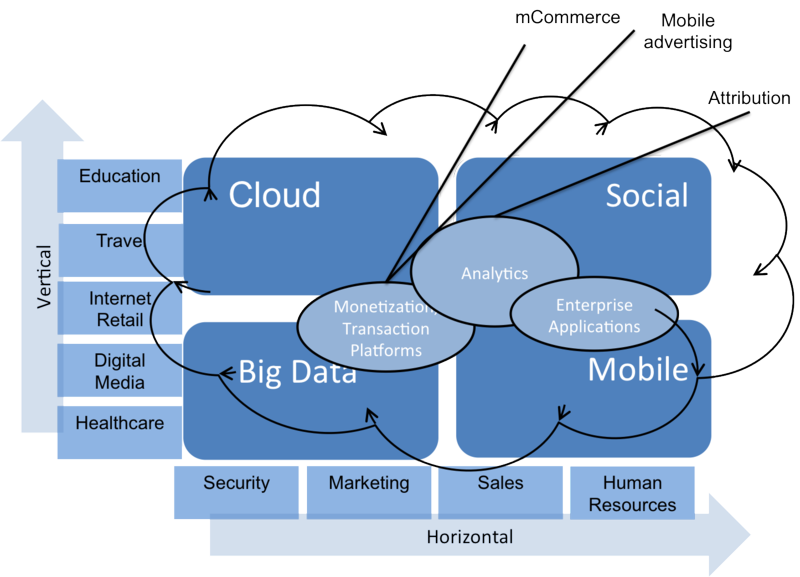 I wrote about the increasing power of the CMO, who is increasingly collaborating with the CIO in setting application strategy in the industries of focus.  We are aware that mobile and social, while of strong interest to the CMO, remain under-monetized and that attribution, particularly involving offline channels, is of strong interest to the CMO.  In addition to these areas we are spending more time with models that provide significant leverage such as freemium, try and buy. We see continued focus on these areas by ad agencies but we see them as having little ability to understand the technologies and the complexities they entail.  Our portfolio companies continue to deal with campaign-based contracts rather than term-license contracts.

As we evolve our investment theses we have been focusing on four areas that we expect will continue to occupy our time for the next 18-24 months.  Of course we would very much like your input and insight regarding these approaches.

One response to “Trident Capital Update and Areas of Investment Interest”