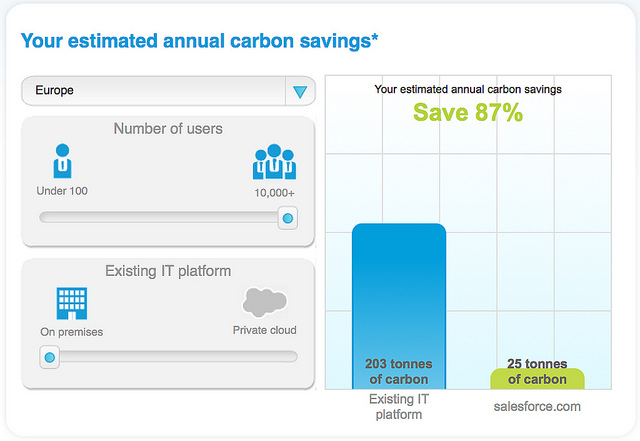 The lack of transparency from Cloud computing providers is something we have discussed many times on this blog – today we thought we’d highlight an example.

Salesforce dedicates a significant portion of its site to Sustainability and on “Using cloud computing to benefit our environment”. They even have nice calculators and graphs of how Green they are. This all sounds very promising, especially the part where they mention that you can “Reduce your IT emissions by 95%”, so where is the data to back up these claims? Unfortunately, the data is either inaccurate or missing altogether.

For example, Salesforce’s carbon calculator (screen shot above) tells us that if an organisation based in Europe moves its existing IT platform (with 10,000+ users) to the Salesforce cloud, it will reduce its carbon emissions by 87%.

On the other hand, if an organisation’s on premise IT platform in Europe is based in France, it is powered roughly 80% by nuclear power which has a very low carbon footprint. If it is based in Spain, Spain generates almost 40% of its power from renewables [PDF]. Any move from there to Salesforce cloud will almost certainly lead to a significant increase in carbon emissions, not a reduction, and certainly not a reduction of 87% as Salesforce’s calculator claims above. 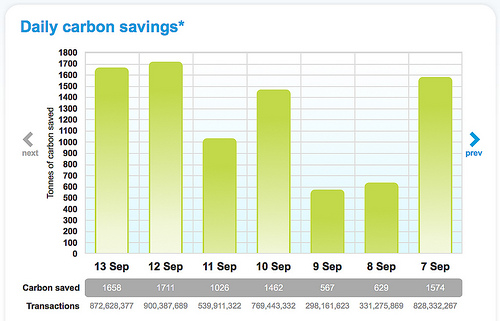 Salesforce also has a Daily Carbon Savings page. Where to start?

To begin with, the first time we took a screen shot of this page was on October 1st for slide 26 of this slide deck. The screen shot on the right was taken this morning. As you can see, the “Daily Carbon Savings” data hasn’t updated a single day in the meantime. It is now over two months out-of-date. But that’s probably just because of a glitch which is far down Salesforce’s bug list.

The bigger issue here is that Salesforce is reporting on carbon savings, not on its carbon emissions. Why? We’ve already seen (above) that their calculations around carbon savings are shaky, at best. Why are they not reporting the much more useful metric of carbon emissions? Is it because their calculations of emissions are equally shaky? Or, is it that Salesforce are ashamed of the amount of carbon they are emitting given they have sited their data centers in carbon intensive areas?

We won’t know the answer to these questions until Salesforce finally do start reporting the carbon emissions of its cloud infrastructure. In a meaningful way.

Is that likely to happen? Yes, absolutely.

When? That’s up to Salesforce. They can choose to be a leader in this space, or they can choose to continue to hide behind data obfuscation until they are forced by either regulation, or competitive pressure to publish their emissions.

If we were Salesforce, we’d be looking to lead.