A few weeks ago I wrote about the consequences of services dependent upon electronic components that have a tendency to become unavailable in an emergency. It’s a fairly simple thesis, we depend on technology in such a broad spectrum of devices and services that when power is unavailable reliance on technology becomes a seizure point.

Last night our power went out for a couple of hours, nothing major but right at dinner time so it ended up being more than a minor inconvenience. I went on PG&E’s website using my smartphone and found a link for an “outage map”, which I clicked on hoping to get status. Hoping…

As it turns out the PG&E website is, apparently, not available in a mobile format and the pages I needed to get to were irreparably formatted and the map itself was unresponsive on my Android device. In other words, the “outage map” page and related services on the PG&E website were unusable and offered no utility.

Here’s what I can’t quite square away, it stands to reason that in a power outage the device you would not have available to you is a desktop computer, which even if a laptop powered by a battery would not have network access due to the dependency on routers and cable/DSL modems which are powered by line current. If the PG&E customer most affected by outage status updates is the person suffering the outage, why would you give them a web service they are unable to use on the one device that would likely be available to them, a smartphone?

From a systems design standpoint we, collectively, are going to need to fundamentally rethink how we build and deliver services that have many points of failure but also have utility in a context of how someone is likely to be using it at the moment it should be delivering critical value. 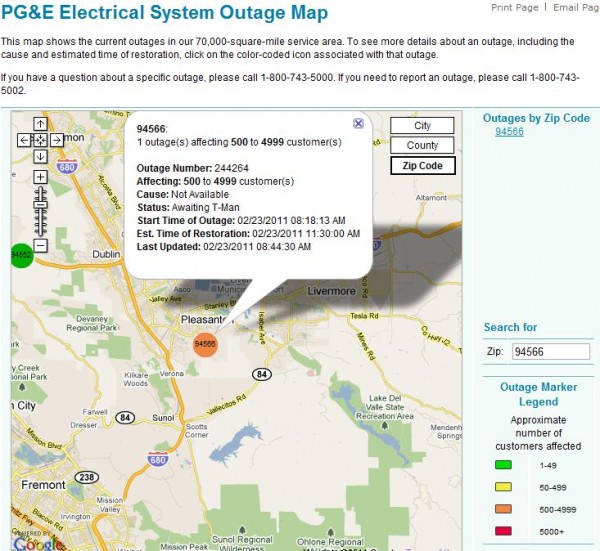 One response to “Electricity: The Weak Link for Emergency Services”