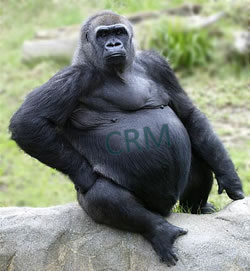 The name’s the same, but this is not the CRM your forefathers knew. Back in the client-server era, enterprise computing focused almost exclusively on automating internal systems. Today, all the innovation is happening at the edge of the enterprise, automating external interactions with prospects, customers, partners and more in the quest for what I’ve called frictionless enterprise.

No wonder Gartner says the typical CMO will soon be spending more on IT than the CIO. It’s not that the CIO is spending less. It’s simply that the CMO has so much that could never before be automated and now, suddenly, all of it and more has to be automated in double-quick time, just to stay competitive.

This transformation is a gift to cloud providers because all these interactions are happening on their territory, beyond the enterprise firewall, where traditional enterprise software is fearful to tread. The proliferation of smart devices and online interaction has extended CRM processes out into the hands (literally) of prospects and customers.

Nowadays buyers intensively research the market before they ever speak to a single salesperson — and the moment they do make contact, they expect a personalized, responsive relationship, delivered direct to their Web browser or mobile app. The trend of consumerization makes this true no matter whether they’re shopping for a designer purse for their own use or a satellite launch system for their employer.

This is my second blog post in a series on how the old, established categories of enterprise software are being recalibrated and replaced to match modern needs. My last post was on the death of conventional ERP. Upcoming posts will look at collaboration, HR, spend management and more. Today’s deals with the redefinition of CRM.

This is a huge topic. The expansion of CRM beyond the confines of the enterprise means that today it encompasses digital and social marketing, website management and mobile apps. It has to join up across sales interactions, service calls, invoice queries and warranty claims. It has to collect and act upon a bevy of external social media and information resources. It must deliver a great customer experience across multiple direct and indirect touchpoints.

An overview of this massively expanding field can barely do it justice. For far more detailed and knowledgeable analysis, the pre-eminent authority in this field is my ZDNet fellow-blogger and Enterprise Irregulars luminary Paul Greenberg. He has just announced the 2013 finalists of his celebrated CRM Watchlist. Over the next few weeks he will be revealing the winners and reviewing them in characteristic and inimitable detail. Two more must-follow experts in the field are Brent Leary and Denis Pombriant.

Here is my brief commentary on what to expect in 2013 from the cloud’s leading CRM vendors. As before, please use Talkback below to add your feedback if you feel I’ve missed any significant players but remember that this review is strictly cloud-only and does not include hosted versions of on-premise software. Nor will I include SMB solutions unless mentioned in passing.

Finally, as ever, I must disclose that some of these vendors, including Salesforce.com, are past or present consulting clients and may have funded my travel to attend their events. Others brief me over lunch or dinner from time to time, and several work with me in the EuroCloud trade association. They all know not to expect any favors from me in my independent writing, but a closer relationship inevitably gives me more awareness of their business than those of vendors I speak to less frequently.

Salesforce. There is only one 800lb gorilla in the jungle of cloud CRM: Salesforce.com. So much so that a few months back, I accused the company of turning into a latter-day Oracle in its pursuit of growth. It certainly has the scale, expense-account sales teams and corporate relationships of a classic enterprise software vendor. It’s so dominant in its core domain of cloud-based salesforce automation that few dare to challenge it there, while it’s built considerable strength in the neighbouring domain of customer service. As the largest and best known pureplay cloud vendor, it has long been the pre-eminent evangelist of cloud applications in the enterprise, and more recently of social business.

In this context, the main thrust of Salesforce.com’s platform play has become been to straddle the gap that separates enterprise sales and services staff from their prospects and customers, connecting their operations into the realms of cloud, mobile and social. And in focusing on that mission, it has left it to others in and beyond its ecosystem to innovate at the further reaches of digital and social marketing. That’s why, when it launched its own Marketing Cloud offering last year in the wake of its acquisitions of Radian6 and then Buddy Media, there was a sense of it wading, with little aplomb, into territory staked out by others. Of course there’s time to put that right; many scoffed at Service Cloud when it was first launched, and now it’s a half-billion-dollar-a-year business.

Salesforce’s strength is in innovating within the fabric that connects the enterprise into cloud, mobile and social, rather than at the bleeding edge. The continued development of creations such as Chatter, Site.com, and the entire Salesforce platform with its fluid APIs will consolidate its lead in that role and give it plenty of scope for continued growth in 2013.

Other CRM. The only cloud CRM vendors that dare challenge Salesforce.com do so from a distance, literally. Salesboom is based in Canada, Zoho is run from India, other smaller rivals such as Really Simple Systems and Workbooks hail from the UK. Most target the SMB market, touting their relative simplicity as a selling point. Enterprise rivals tend to be on-premise or hybrid offerings such as SugarCRM, Oracle CRM OnDemand and Microsoft Dynamics CRM, which puts them beyond the scope of this cloud-only review. SAP Sales OnDemand merits a call-out as a fully multi-tenant offering, but despite a striking UI, it has so far proven of muted appeal, even among SAP’s existing customers.

Oracle deserves separate mention for the strategic positioning of its offerings and in particular for its pending acquisition of marketing automation vendor Eloqua — a major foray into unadulterated multi-tenant SaaS territory. I mentioned earlier that CRM has extended into new fields, and Oracle’s acquisitions are strategic beachheads in the most important of them. Eloqua was an early pioneer and became market leader in the now substantial field of digital marketing automation. It will make an interesting complement to Oracle’s mid-year acquisitions of social marketing and analytics cloud vendors Vitrue and Collective Intellect. RightNow, acquired a year ago, spanned multiple touch points from traditional contact centers to social media.

Finally, of course, Oracle cannot be overlooked as the leading player in enterprise CRM. It claims that its CRM OnDemand and Fusion CRM applications can run as multi-tenant apps, but in my book if customers run the same code for on-premise deployments, it hugely dilutes the effectiveness of the cloud app.

Other cloud marketing. When I first wrote about enterprise software pivoting to new stacks, I cited Marketo as a leader in a market that had barely existed a decade ago. That market, in which Eloqua also plays, is still evolving fast, with Marketo acquiring social marketing vendor Crowd Factory last year, while other, younger competitors snap at its heels. I do a disservice to several strong vendors in lumping them all together like this, but space constraints give me no choice as I mention in passing up-and-coming names like Pardot and HubSpot, along with Genius, Aprimo and others. A separate mention goes to InsideView, which feeds externally collated information into sales and marketing automation applications to further help identify the most promising and timely prospects.

More cloud marketing. While the boundaries are blurred, I have opted to carve out a separate set of vendors who are more centered on email marketing management, such as ExactTarget, Emailvision and Silverpop. Many of these focus on SMB buyers, including Constant Contact, VerticalResponse and the rapidly growing MailChimp. There’s much innovation at the SMB level including Nimble and InfusionSoft, which recently garnered substantial venture backing.

In this section I also mention website cloud platforms, even though it’s a highly fragmented category in which none of the players are particularly large and they tend to specialise in specific niches. Examples include CrownPeak, Agility CMS, Clickability (now renamed Limelight Dynamic Site Platform), Echo and Alfresco in the cloud.

While most enterprises prefer to build and manage their own websites, I suspect that the increasing demands of engagement automation, social and mobile will make the homegrown approach less and less sustainable, creating a large market gap that is currently ill served. Interestingly, Salesforce.com introduced an offering last year for just this market.

Cloud customer service. Finally, I once again have too little space to do justice to a massively innovative set of vendors that are bringing social dynamics to the arena of customer service. Vendors such as helpdesk platform ZenDesk, which raised $60 million and is said to be prepping for an IPO this year; Assistly, which became Salesforce Desk; crowdsourced support platforms led by GetSatisfaction and Lithium. More innovation comes from cloud-based call center services including LiveOps and NewVoiceMedia.

Each of these vendors exemplify the scale of transformation in CRM. The center of gravity has moved away from internal efficencies and centralized reporting to enabling closer, more timely and contextualized interactions with prospects and customers. I don’t pretend to know how this is all going to pan out; I don’t think anyone can. This transformation remains a work in progress, with much innovation still to come before new best practices become established — and cloud platforms are playing a leading role.

6 responses to “Son of CRM: cloud sales, marketing and service in 2013”