Twitter erroneously suspended, and subsequently restored, a prominent researcher’s account two months after he tweeted a security warning intended to inform his audience about an imminent threat.

Aside from poor security handling, this situation offers a case study example of immature customer service and suggests problems with the organization’s corporate culture. 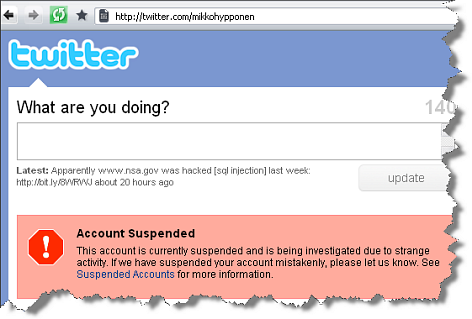 I’ve unsuspended your acct.
You were suspended for using the malware URL rnyspeceDOTcom in DMs.
Be careful!
We scan evrythng for malware. 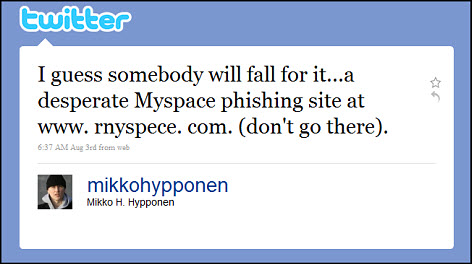 I asked Mikko to share his thoughts on what happened:

Obviously, I was quite surprised about the whole incident. As I’ve worked with Twitter previously regarding Twitter worms and such, I really didn’t expect this. In addition, I wasn’t expecting them to ban me because of a tweet that was actually warning users to stay away from a phishing site. I think their process leaves a lot to be desired.

There are several problematic aspects regarding Twitter’s handling of this matter:

One might expect a small, poorly funded startup to exhibit these problems, but that’s not Twitter’s situation. According to Bloomberg, the company is valued at $1 billion, having raised $150 million.

Cute logos and web page illustrations are no substitute for genuine customer service values. If the company doesn’t improve customer service attitudes, its reputation may one day descend to the level of cable and telephone companies: hated utility services that we tolerate until a replacement comes along.