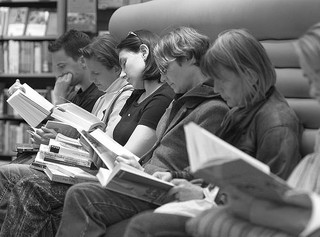 Just finished a year and a half of unblogging.  Had a gig, and oddly enough, what they wanted was exclusive access to my opinions about technology.  So it wouldn’t have been right to broadcast them out to the net, too.

Before ramping back up, though I’m going to take a break.  Sit back.  Travel some.  Read some books.  Extend my range a little bit.

In the process, I thought, why not do the same with the blog.

What follows, then, has nothing to do with technology.  But it contains much better advice than I usually give.

Read these books.  All of them are terrific.  A lot of fun.  Worth your time.  I first compiled the list for some people in my family who asked for it.  Thought I’d share it with you.

In no particular order:

1.  To Each His Own. Leonardo Sciascia. Sciascia was an Italian journalist who wrote both fact and fiction about the Mafia. His three works of fiction are among the creepiest murder mysteries ever written. If the thought of the Mafia scares you now, any of these very short books will have you looking in your closet before you go to sleep. In this one, a Sicilian priest begins to suspect that there’s more to the murder of a postman than meets the eye. And there is.

2.  The Long Ships. Frans G. Bengtsson. An adventure novel written by a Norwegian journalist during the Nazi occupation, set (more or less safely) in 975 AD, when the Vikings would row (literally) from Norway to Spain and back, if they thought they could pick up some treasure on the way. The hero, a Viking captain, does indeed go to Spain, is captured, rescues himself from the galleys, becomes a favorite of a Castilian Prince, revenges himself on his captor, escapes with a fair amount of booty, clevery fends off the King of Norway who thinks that boodle belongs to him by rights, deals with mutiny, shipwreck, and treachery, and that’s just the first 100 pages. Then it gets better.

3. Odds Against. Dick Francis. Horses. Self-possessed loners who deal with whatever comes up. Burly, ruthless villains. It’s Dick Francis. What can you say? The best of the lot, probably, and if you like this hero (Sid Halley), there are two more with him.

4.  The Spies of Warsaw. Alan Furst. Clever Nazi villains, but a cleverer hero, who just barely escapes. Wealthy, but available countesses who have a past; dangerous border crossings; bags of money. What could be more fun?

5.  True Grit. Charles Portis. There’s a reason why it’s been made into a movie, not once, but twice. It’s a heckuva yarn. What the movies lose, however, is the best thing in the book, the voice of the heroine–resolute, prudish, penny-pinching Mattie, the one who’s willing to hire John Wayne and make him do what he wants, but sure as shootin’ ain’t gonna pay full freight, not if she can help it, even if it is John Wayne. I mean, he drinks. The (first) movie does have one thing superior to the book. It offs Glen Campbell. Can’t complain about that.

6.  Gone with the Wind. Margaret Mitchell. Another book that’s better than the movie, but takes a lot more time. I don’t need to tell you anything about it, except maybe that the title comes from a poem by Victorian poet, Ernest Dowson, who also came up with “days of wine and roses,” and “loyal to you, darling, in my fashion.”  No one reads Dowson any more.  Does anybody read Margaret?

7.  The Count of Monte Cristo. Alexandre Dumas. At a little over 1000 pages, it isn’t an easy commitment, and even Dumas got tired about page 850, but listen, even if you just do the first 350 pages, where he’s barely escaped from the Chateau d’If, you can call it a day,  and still had about 20 books worth of great reading.