Outsourcing may be battered, bruised and vilified… so why is only a twentieth of enterprises planning to reduce it in 2013? 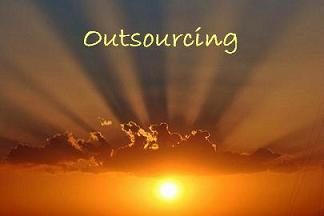 2013: A new dawn for a maturing outsourcing industry

Make no bones about it:  2012 was a pretty dire year for the industry known as “outsourcing”.

However, brand new data from our State of Outsourcing 2013 Study conducted with the support of KPMG, the largest-ever research survey focused on IT and business function outsourcing, clearly shows that the majority of enterprises are not only aggressively focused on increasing their outsourcing portfoilios, but many are now taking a more mature and realistic approach.

So, as always, let’s examine the facts…

How outsourcing got battered, bruised and vilified in 2012

Why outsourcing is more embedded than ever in corporate operations strategy

1355 stakeholders across enterprise buyers, service providers and consultant/influencer organizations shared their views, observations and intentions for 2013 and beyond, when it comes to outsourcing IT and business processes.  We are going to delve deep to share these dynamics with you in the coming weeks, but let’s start with the key dynamics – how fast is the industry growing, and what is driving the decisions: 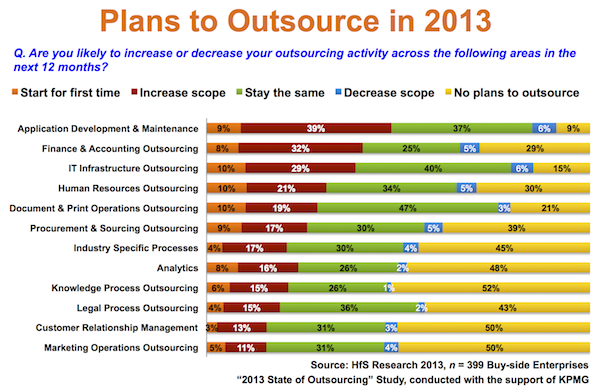 399 major enterprises have spoken about their 2013 outsourcing plans and barely a twentieth of them are looking to reduce their outsourcing scope across any IT or business function in 2013. Moreover, half of them are looking to increase their outsourcing of application services, four out-of-ten their finance and accounting, and a third their HR. Moreover, there is a notable pick up in newer sourcing areas, such as analytics and legal.

The classical values of outsourcing are stronger than ever: cost, standardization and global delivery

When it comes to the decision drivers, it’s almost refreshing to see enterprises focusing on the basics:  cost, global delivery and standardized process: 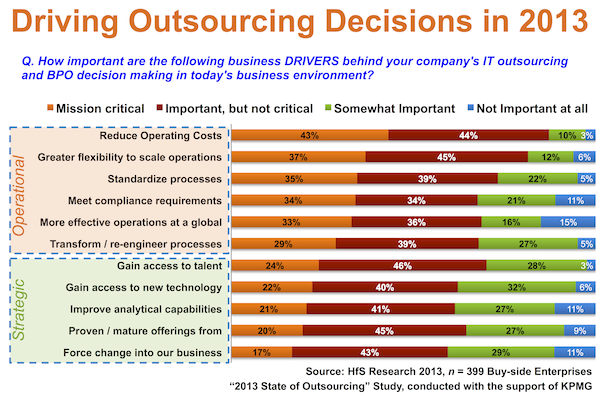 While, on the surface, this data isn’t exactly surprising, what it’s telling us is the vast majority of enterprises are eagerly looking to industry standard offerings as a priority.  We’ve been lauding the old “ADP payroll analogy” for several years now, where there is little discernible business reason to run your payrolls yourself these days, and this is ringing true for the rest of the operational functions:  being competitive with business operations is achieved through standardizing onto best-in-class processes.  And to achieve that standardization is, really, quite straightforward – move these processes onto proven technology platforms and have them operated in a cost-efficient manner.  For most organizations today, they’ve failed to do this effectively inhouse (through many years of pain and wasted investments) and shifting them over to a third-party has forced the issue and got them from A to C.

The Bottom-line:  The tenets of outsourcing haven’t changed – it’s the simple fact that operations leaders have run out of excuses not to do it

The outsourcing debate used to be centered on the ability of enterprises and providers to do it right, to make the required cost savings with the appropriate amount of risk mitigation. This data finally, finally, renders that debate moot:  the basic ingredients of outsourcing today are maturing and proven to work when executed effectively… the focus now shifts to the how enterprises can evolve into a globally sourced environment, not simply the should.  Our next piece of analysis will zone into the core challenge of enterprise operations in 2013:  how enterprises can alter their internal mindsets, attitudes and operational issues holding them back.  Stay tuned…

2 responses to “Outsourcing may be battered, bruised and vilified… so why is only a twentieth of enterprises planning to reduce it in 2013?”