I have written a number of times about Plex Software. They offer a cloud-based ERP solution that has sold quite well to manufacturers, especially those in the automotive industry. My initial interest in them was due to the size of their product offering (i.e., full ERP) and their multi-tenancy.

Recently, the company has undertaken a new capital financing structure. Previous private equity investor Apax Partners (and others) sold their stake to Francisco Partners in June 2012. In December 2012, the company took a $30 million investment from Accel Partners. Now, in January 2013, Plex has a new CEO, Jason Blessing.

Jason and I first came to know each other from his days at Taleo (although I maintain I might have known him when he was with PeopleSoft). The fact that many of the firms that Jason has worked for have been acquired by Oracle is strictly a coincidence.

Late last week, I got Jason on the phone and we chatted about all things Plex.

Jason took the Plex CEO role as its brings him back to Michigan, where was raised, and to ERP (he apparently did a lot of ERP implementation work early in his career at PriceWaterhouse).

The $30 million investment from Accel Partners is the cash component of their new growth strategy. Jason outlined several vertical industries that the company is planning to target–each builds off of knowledge, intellectual property, and experience gained in serving the automotive manufacturing sector. These new verticals include: electronics, food & beverage, and civilian aerospace. When I probed as to a possible run at medical devices, he countered that the regulatory, documentation, and reporting requirements for that sector and the pharma and defense aerospace sectors were significant, and those spaces would not be expansion markets for Plex at this time.

Jason also added that the company will be making moderate investments in sales and marketing while expanding their overseas operations. This makes sense as Plex customer sizes keep growing. Plex has sold well to Tier 2 and 3 automotive manufacturers, and the Tier 1 manufacturers have noticed this. Several of them have engaged with Plex, and as they do so, they will undoubtedly pull Plex into more geographic markets with ever bigger customers. 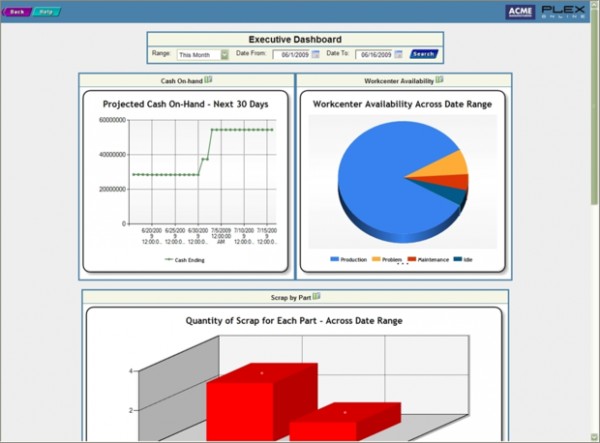 Jason was interested in Plex as he sees the cloud deployment model being especially attractive to SMB manufacturers. The fact that other major software firms, like Oracle and SAP, are now focused on cloud should bode well for the space overall.

Jason stated that the current investors (e.g., Francisco Partners and Accel Partners) specifically want him to move Plex up market into larger accounts. They apparently believe that his experiences at PeopleSoft, Taleo, and by extension, Oracle, give him insight into how to sell and service larger customers.

I asked him if that also means that Plex will need to supplement its skillsets/employee contingent to better serve a different, more global, and more complex prospect? He replied that some new capabilities will be needed over time.

I pressed about the ability of Plex’s channel partners to meet this growing up market requirement. Jason expressed great satisfaction with two of their current channel partners, Plante Moran and Baker Tilly. He indicated that a rapidly growing Plex will attract more partners, and the company may need bigger partners to handle the larger customers.

Jason believes that a lot of older JD Edwards, Infor, QAD, Epicor and other products are ripe for moving to the cloud. He also thinks that Plex has “true manufacturing execution<” and was “built from the get-go in the cloud.”

The competitive landscape for Plex is definitely heating up. For years, many of the large application software vendors chose to ignore the cloud space, and many mid-market firms simply re-packaged a hosted version of their on-premise solutions as a SaaS ERP (I call these SaaS-querades). That left much of market for a multi-tenant cloud ERP to Plex. Now, SAP has Business-By-Design out, Kenandy is here as is a robust Rootstock. Other mainline vendors have found the cloud, too, and will doubtlessly turn up the competitive pressure on Plex. Jason will need to make continued enhancements to the technical architecture (e.g., expand the PaaS capabilities) to keep the product competitively positioned ahead of advancements from others.

Some new CEOs inherit a mess and are expected to turn it around overnight. Some get handed a firm at the peak of its market popularity and must conduct an orderly transition to a smaller firm. Neither of those jobs are very desirable. Jason got handed to him a pretty solid firm with solid growth prospects, good buzz, and lots of happy customers. His challenge will be to expand the SMB market penetration, expand the verticals served, and grow globally. Each of these have their particular challenges, but if he’s smart with the development of his team, is particular about how the capital is deployed, and executes the global expansions just right, he should do just fine.

I hope he got a good equity package as part of his deal–he could do well with it.