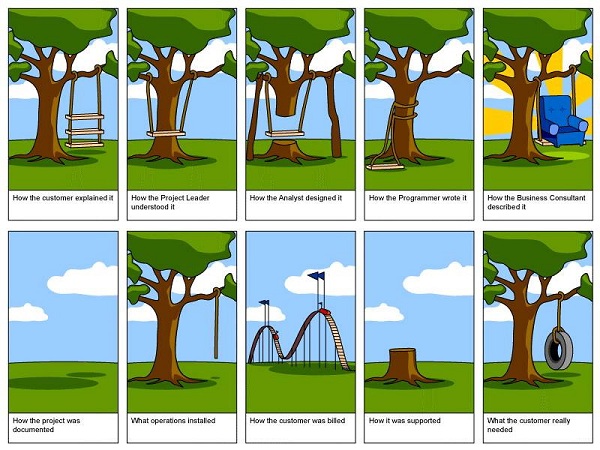 There Are So Many Causes Of Project Failure

There was quite a lot of discussion on Twitter and in the blogosphere earlier this week about a major payroll project disaster plaguing the State of California government.  That discussion broadened to include tales of more failed payroll as well as ERP and various other large-scale systems projects.  If you want to immerse yourself in tales of such disasters, fellow Enterprise Irregular Michael Krigsman has written a ton about such projects as have many others.

Following the back and forth for a while, one thought kept running through my head.  It was one expression I heard often at my last real job, the last time I had an actual employer.  At AMS, it was understood that there were no stars on a failed project.  Regardless of whether the client or we were at fault, or perhaps it was the fault of the occasional packaged software vendor with whom we worked or their products, there was usually egg on everyone’s face by the time the dust settled on such a project.

Did we collectively head off the ingredients for failure by walking away from every project that didn’t have all the ingredients for success?  Were client expectations ever realistic?  Was the software we built or the vendor product we used ever as good as it needed to be, as fit for purpose as one could have wished?  Did we put together the A-team in every respect on every project?  Did the client?  Did the package vendor?  Did we avoid betting on technology that didn’t mature quickly enough, or on the staying power of client leadership, or on the other million possible sources of failure?  Nope, well at least not on my watch.  For all the many successful projects, some inevitably weren’t.  And I for one felt the heat of those failures — and hopefully learned from them.

One of the reasons I’m very suspicious of high flyers who never land long enough to feel the heat of their project failures, of their flawed decisions or flawed hires or flawed strategies, is that they don’t stay around long enough to learn from those failures, let alone to own up to their own responsibilities in them.  The reality is that we all screw up unless we’re hiding under our beds contemplating our navels.  But the folks I value highly are those who learn from their mistakes and from the mistakes of others.  They practice their craft, build upon those lessons, and become much better craftsmen

Motivated by all this discussion, I created another one of my little video cartoons.  I hope you enjoy it.

Recipe For Payroll Project Failure by naomibloom on GoAnimate