New research on the success of ERP implementations reveals mixed results. Although respondents are satisfied with their choice of software, the survey shows most ERP projects run over budget and buyers are do not fully receive expected benefits from their projects. Nonetheless, few respondents characterized their ERP project as a failure.

For chief financial officers, the survey offers compelling insights and is worth reading carefully.

System integrator, Panorama Consulting Solutions, conducted the research survey during the four-month period of September, 2012 to January, 2013. The results are based on data from 172 respondents who completed a survey on the Panorama website. Seventy-one percent reported revenues of $300 million or less and 21 percent of respondent companies had revenues of $1 billion or higher.

Cost, duration, and benefit summary. Although project duration and cost fluctuate from one year to the next, three points stand out about the current data:

This chart summarizes the top-level results: 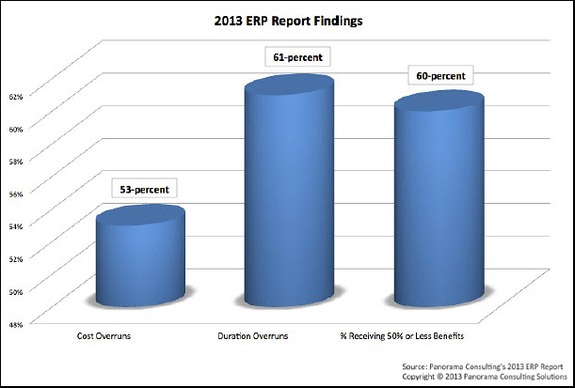 Although these numbers are bad, they are consistent with failure rates reported in other studies and enterprise software domains such as CRM.

Implementation budget, schedule, and realizing benefits. According to the survey, 53 percent of ERP projects exceeded their budget: 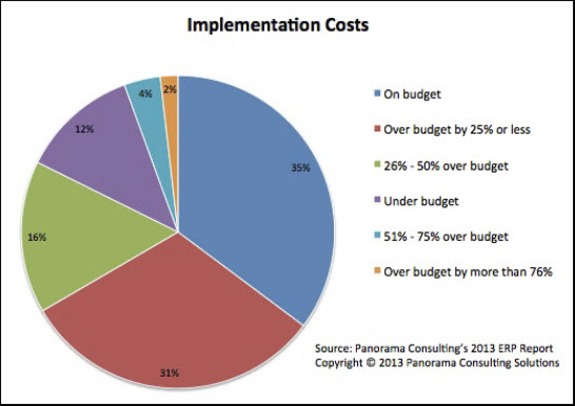 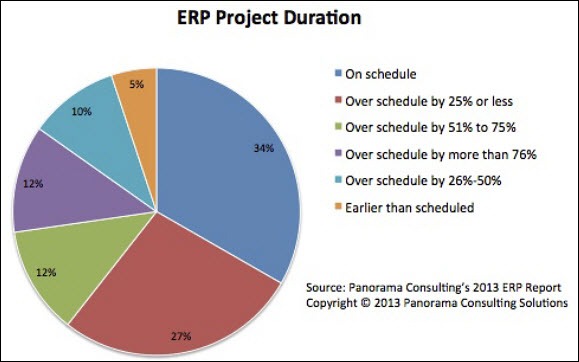 The survey shows a significant problem with respect to realizing benefits from the ERP implementation:

In other words, fully 60 percent of the ERP projects in the survey realized less than half their desired benefit. By any reasonable measure, these projects are problematic: 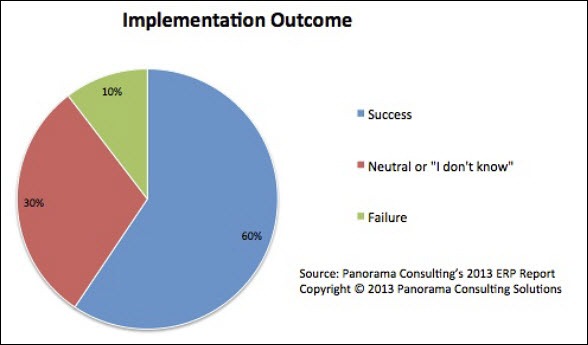 The cloud question. Despite the hype, only 14 percent of respondents are using ERP delivered as Software as a Service (SaaS). Although the best cloud vendors can deliver superior security and reliability than most internal IT departments, market momentum to ERP in the cloud is not there yet, as the following diagram illustrates: 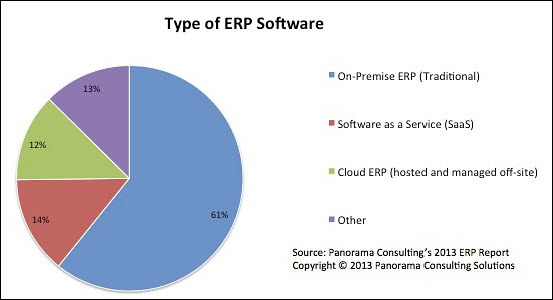 Payback period. The survey reports an average payback period of 25 months (down from 32 months in 2009). The graph below shows that over half the respondents did not recoup their costs or were unsure: 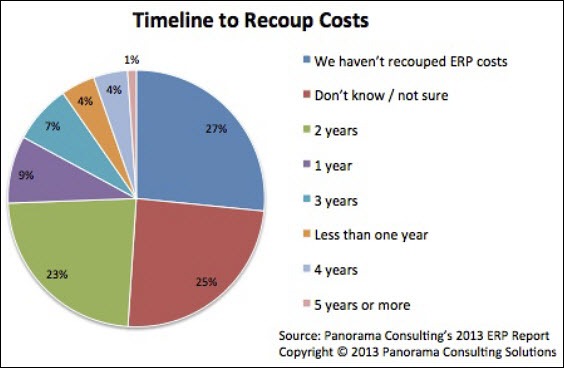 When reading this data, bear in mind that respondents who have not completed an implementation will naturally report no payback — after all, the software is not yet operational. More troubling is the 25 percent who are unsure of their ERP payback period. One wonders whether these people had a clear set of goals and business when starting their project.

The survey data presents a contradictory view of ERP success and failure. Although most ERP implementations run late, over-budget, and do not deliver planned results, only 10 percent of respondents called their ERP implementation a failure. At the same time, 60 percent called their ERP project a success and 30 percent expressed neutrality on the success / failure issue. These numbers indicate that buyers’ expectations are too low — it is indeed unfortunate these numbers are so low.

Important lessons. Implementing an ERP system is always complex because the deployment drives changes to both data and processes that extend across departmental boundaries inside the organization.

Regarding process changes and application software, the stakes have definitely increased in the last few years as wave after wave of disruptive technologies have swept across the IT landscape. Just try to imagine any business process that isn’t affected by social, mobile or cloud technologies. Ditto for big data, analytics and in-memory processing technology.

Today’s CFO must balance the demands of two competing forces: the extraordinary wave of innovation (and the process changes these bring) against the regulatory, control-driven forces who want every process, every exception, and device to be documented, controlled and secured. In recent years, CFOs have spent tens of billions of dollars (or more) with audit firms to document the control points and risks within their existing ERP solutions.

The costs, a result of regulations and legislation (e.g., SarbOx) in a post-Enron world, were staggering for many firms. After all that expense, companies may find their processes ‘locked-down’ and unchangeable which is unfortunate as these same companies may be forgoing phenomenal opportunities to adjust and improve business processes with some of the newer, cloud-enabled, social data driven, mobile-connected, video-powered products and ERP extensions available today.

Can we trust the survey? The Panorama Consulting research offers a useful benchmark for understanding ERP success, failure, and drivers of value. Because Panorama has run similar reports for the last several years, the data presents a consistent picture over time. In addition, the results are in line with similar studies run by other companies.

Nonetheless, the survey does have several deficiencies:

Despite these issues, the data seems solid and I recommend you trust the numbers.

Final thoughts. The most important measure of project success and failure enterprise buyer’s perception and opinion. Since only 10 percent called their implementation a failure, we must accept that number as the failure rate reported in this survey. However, the survey as a whole makes clear that genuine ERP success is elusive, at least among this group of respondents.

ERP can bring significant benefit but implementation requires careful attention to both business planning and technology activities. For this reason, achieving project success and business value demand that CFO and CIO work together as a collaborative unit.

Therefore, it is essential to create this partnership and show your entire organization that the business and technology teams can communicate, collaborate, and share knowledge on a systematic and consistent basis. This collaboration is the true underlying strategy for gaining maximum value from ERP or any other enterprise initiative.

One response to “2013 ERP research: Compelling advice for the CFO”