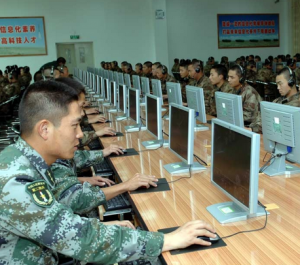 We’ve been avoiding or at least minimizing comment on the latest round of computer hacking allegedly by a special unit of the Chinese Army.  However as stories have flowed in the New York Times, like this one, it is abundantly clear that the Chinese have been hacking into many of the organizations that our democracy and western economies require to operate.

The Times has done a good job of analyzing the problem and cites a reticence by many corporations to come out publicly to admit to the world that they’ve been hacked and valuable intellectual property taken.  The reasons are obvious and unfortunately they articulate the old saw about boiling a frog.  Many victims see themselves as unique and fear the consequences of exposing the bully — including consequences of irate shareholders who would blame them and demand a scalp.  In the best traditions of courageous journalism, the Times, The Washington Post and The Wall Street Journal have all come forward to say they’ve been hacked.

In some cases the hacking goes on for many months and some organizations have let the hackers do their business to understand what the hackers are looking for and to better help them trace the intrusion back to a city block off Datong Road in Shanghai, China.  There sits a twelve story building housing People’s Liberation Army Unit 61398, which does the hacking.  The Chinese government has denied everything.

Look at all the oil companies in the sample.  Another list could easily show tech providers like Intel, Google, Adobe and others.  I think each hacking incident has its own rationale.  The newspapers were hacked by the Chinese Army looking for dissident sources used by reporters in unflattering stories.  One hot storyline has been about the corrupt connections between new Chinese leaders with the government trying to shut down criticism.  The same was true of Google when the Chinese went after Gmail looking for email addresses of the same dissidents.

As bad as all that seems, the energy companies have my attention.  It should be noted, with the vast majority of crude being controlled by national oil companies that the primary source of information about crude oil should come from the nationals themselves.  Surely they could be hacked.  But not so fast.

Back in the 1990’s all of OPEC did some fancy bookkeeping on their proven reserves sitting in the ground.  Everyone roughly doubled the estimates of reserves they had without lifting a finger to drill another well or to do anything to actually find oil.  This was prospecting on the balance sheet, shady bookkeeping.  A few intrepid souls called bullpucky on the doubling but back in the 1990’s oil was cheap, the North Sea was producing at accelerating rates and casual market watchers could easily believe the fiction that there was a heck of a lot of oil in the ground.

Twenty years came and went and the North Sea is slowing down.  Meanwhile the supply of crude is very tight — that’s why we’re paying nearly $4 per gallon today.  If oil really were abundant relative to demand the price at the pump would be a more 1990’s-ish buck a gallon.

So, back to the Chinese.  They know supply is tight and they have a vested interest in keeping the oil flowing into their expanding economy.  Understanding the supply side is important to them because they have a centrally planned economy and they make demand decisions based on realistic supply options.  The alternative is to brace for war which all governments do all the time.  I am not the first to refer to the hacking as cyber war and it’s an apt description.

There has been an open door policy between western governments and the oil producers — Dick Cheney was the CEO of Halliburton after all and W. was a wildcatter.  So the U.S. government has always had multiple good sources of information on what has been going on.  Not so the Chinese.  Which gets us back to hacking.

While hacking into someone else’s computer systems is not to be condoned, the bigger point is that the intellectual property — even the knowledge of production rates, their declines and proven reserves — is critical to keeping the economy functioning.  It is interesting, to say the least, that our emerging adversary has such a keen interest in this information and that our free society is so blasé about it and its implications.