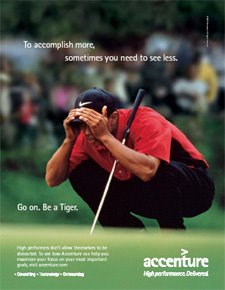 When you build your brand on the shoulders of another, make sure their brand remains solid

I’ve sat on this post all week. Until today, I thought I was the only one who thought Accenture (ACN) (the folks who have staked claim to the High Perfomance brand) was going to rue its long-term association with Tiger Woods. This morning, TechMarketView weighed in as has the Evening Standard. Both discussed Accenture’s vulnerability to the allegations and the recent behavior of Tiger Woods.

What Tiger Woods did or did not do isn’t the point. His car crash, the revelations (true or otherwise) of third parties about Tiger Woods, his recent statement, etc. all indicate that he is merely mortal and not some sort of golfing demigod. It would appear that Mr. Woods is not the perfected ideal of ‘high performance’ and ‘excellence’ that firms like Accenture like to believe he is. Again, he’s simply human like so many of us. Remember, lots of people idolized Pete Rose, Michael Vick, Kobe Bryant, and many others before something happened to each of them.

In my opinion, Accenture has made four tactical errors in their use of Mr. Woods in their decade-long relationship with him.

1) Accenture made the brand building of Tiger Woods an equal part of their own brand building. Their continued veneration of Mr. Woods may have been seen as a way to float both boats but it also meant that if one of these two ships were to start sinking, it would take the other down with it. It may be time for Accenture to see if it can sell ‘high performance’ solutions as its own brand and not as a jointly branded effort.

2) Accenture tied their brand to a living, young celebrity/personality. There’s a reason that some firms use long-deceased icons like Abraham Lincoln or George Washington as brand identifiers as no one is likely to dig up any new dirt on these folks. Moreover, since they are deceased, these icons cannot be tempted into doing anything new that could be questioned, filmed or aired on TMZ.com. Other firms use animals like eagles, geckos or lions as brand identifiers for similar reasons. The image of a specific animal is well-known usually.

3) Accenture failed to see how over-extended Mr. Woods brand is. By my count, Mr. Woods is endorsing products for Nike, Gatorade, Gillette and Accenture. At times, he appears to have endorsed: Buick, Titleist, American Express, Rolex, General Mills, etc. If Accenture and Mr. Woods really are high performance players, would an Accenture staffer who wore Nike shoes and a Rolex watch be an even higher performance systems integrator?

4) Accenture has overstayed its joint branding with Tiger by a few years. I’ve written about this before and now my past remarks seem, dare I say, prescient. Certainly, someone should have asked “How long should this partnership last?” “When does the risk (and cost) start to outweigh the benefit of continuing this relationship?”

While I’m fairly certain that someone in Accenture marketing has already penned a missive extolling their continued, undying support for Tiger Woods, I haven’t seen that message out yet in a press release. I’d even bet someone else is also looking at the morals clause in their endorsement contract with Mr. Woods. And, you can bet the creative types are reviewing their print work and copy to see if some of it should be re-worked or experience a complete Tiger-ectomy.

Tying a company’s brand to a celebrity is always risky. Look at diet food companies for great examples of this. One day, they’re highlighting some celebrity that has lost 40 or more pounds of excess weight on their products. The next day, they are distancing themselves from the same celebrity as this person has been photographed carrying 60 lbs. of newfound weight. Celebrities are human and they suffer the same foibles that you and I do. They get addicted to sex, gambling, food, drugs, etc. They can have bad parents, bad parenting skills, bad kids, etc. They get photographed in unflattering poses, places, etc. Some know no end to the depths of their human condition and get private, intimate movies of themselves sold on the Internet. Celebrity endorsements are ripe for trouble and few celebrity endorsements can last a long time.

It’s time for Accenture to wean itself off its Tiger Woods fixation. But, unlike the diet food firms above, Accenture shouldn’t bounce from one celebrity to another. Instead, Accenture should learn to market and promote itself without the crutch of a celebrity. It should find ways to promote the high performance aspects of its solutions not the sports victories or innate talent of its celebrity pitchman. Accenture needs to make its solutions and abilities (not the golfing industry) sexy and exciting.

If Accenture cannot go cold turkey, they should at least find a broad range of lesser known but equally impressive high performing individuals. Accenture could showcase:

– women athletes
– great business leaders
– people who drive great social causes to extraordinary effect
– a couple that has been a foster parent to scores of successful children
– etc.

High performance is something that potentially exists in all of us. Maybe Accenture can focus more on how they draw that out and bring it to bear on client projects.

The branding question for today is then: Can Accenture step away from Tiger’s handicap?

13 responses to “Accenture: ‘Branded’ by the Tiger Woods mess”