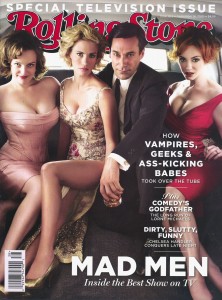 A few weeks ago, writing a guest column on The Future of Work, I found it useful to watch an episode of The Office to see how much things have changed in the last decade. Watching a rerun of a Mad Men episode, it hit me how much more has changed in the Madison Avenue world since that show’s setting in the 60s.

Explosion in media channels : The biggest change of course is how the two smaller screens – web and mobile are the hot new media as the world moves to digital marketing. And yet media which was hot in the 60s – TV, radio, billboards, glossy magazines – continues to evolve.   A poignant reminder of that came when Larry Ellison described in his OOW keynote how Lexus, looking for new spokespersons, monitored “the reach” of athletes at the London Olympics based on live analysis of  over 5 million tweets. As he presented, I wondered where the people tweeting had watched or read about the athletes. On NBC, NBC Sports Network, MSNBC, CNBC, Bravo, Telemundo, or NBCOlympics.com? On ESPN, ESPN.com, ESPN Radio, ESPN The Magazine? Those in London could have seen it on giant Panasonic and other screens around the city, in pubs offering wi-fi so people could stream to their smartphones,  on the ferry to the Games, at the Games themselves. CMOs expect their agencies to provide such analysis because in many ways traditional media often provides better eyeball reach for the investment.

Globalization: Most agencies help their clients with “brand books” which guide consistent messaging,  icons and legal print around the world. But the nuances around the world are many.  Advertising in Indonesia requires sensitivity to Islamic stickers and icons. In India, sponsoring cricket tournaments will continue to be a savvy marketing investment even as the country has one of the fastest growing mobile markets. VW executives must have explained to countless German peers why US Football ads continue to be one of their biggest marketing expenses each year.

Cutting edge technologies: Agencies have always leveraged the best of technology from Hollywood, music studios and broadcasters. But that has turned up a few notches in recent years.  Ikea got help from its agency McCann as it built an augmented reality app for its catalog. The House of Moves is bringing motion capture from gaming world to commercials. During the 2012 Olympics, NBC broadcast some of the events on a 3D platform (in partnership with Panasonic)

Competitive landscape:  The agency world has always been very competitive. Lots of boutiques and mergers.  Client churn far greater than with legal, audit, outsourcing firms. In the last decade,  given the growing technology in marketing,  many IT centric services firms have become partners, and often competitors. IBM, Accenture, Cognizant and several others have Interactive units. Oracle and Salesforce.com both acquired (smallish) agencies last year. Firms like Sapient and Razorfish have long been comfortable in creative and technology worlds.