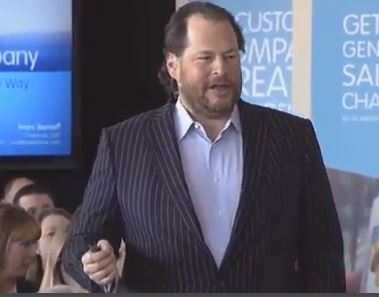 I flew home from Microsoft Convergence in New Orleans arriving back in Boston around 9:00 PM last Thursday.  I was tired from capturing a week’s worth of information from the Microsoft fire hose for the previous four days.  But on Friday a Tsunami named Salesforce.com blew into town to inaugurate a world tour trumpeting the company’s new messaging centered on enabling enterprises to become “customer companies”.

The tour and the messaging was field tested in New York last month and refined over the past few weeks to produce the Boston show and if Salesforce and its CEO Marc Benioff run true to form, the message will continue being refined throughout the spring and summer and delivered in final form at Dreamforce to be held this year in December in Salesforce’s home town of San Francisco.

The big news coming out of Boston, if I understand it right, is that Chatter will become Salesforce’s primary interface.  Prognosticators peeling that onion got immediately weepy eyed citing the risks involved.  Surely, the logic went, when you change sales people’s UI you are asking for trouble.  These people are not happy change agents after all — look what happened when SFA came onto the scene, they opined, look how poor adoption was and how passively aggressively sales people didn’t adopt.

Yadda, yadda.  Have they forgotten that early SFA sucked?  But look how they took to Salesforce like ducks in your swimming pool.

That was then and then was different or as Mark Twain liked to say history doesn’t repeat itself but it rhymes.  So what’s the rhyme?  Actually, it comes from two sources as I see it.

First, we need to Segway to Peter Coffee, Director of Platform Research at Salesforce, and this is not a non sequitur; it has a purpose, I promise.  If you’ve been to a Salesforce event in the last five years or so you know that Coffee does a pre-show to warm up the audience.  Coffee is not an entertainer happy to give away prizes or perform skits the way others do at conferences.  Coffee’s orientation is news.  It’s focused on the matter at hand so that his effort bridges nicely into Benioff’s main event.

So, one of Coffee’s interview guests last Friday was MIT professor, Andrew McAfee who, along with fellow prof, Erik Brynjolfsson just published Race Against the Machine a short book about the ways we will work in the future.  The subtitle provides the Cliff’s Notes: “How the Digital Revolution is Accelerating Innovation, Driving Productivity, and Irreversibly Transforming Employment and the Economy”.  Got it?  No?  I will post a review of this fine work (which I am not sure I agree with in all its particulars) soon.  My point here, and I guess it was Coffee’s point too, is that technology is racing ahead and changing how we work and that people who don’t adapt and adopt will be left in the dust.  That’s point one.

Point two is the long evolution of CRM, SFA and mobility.  For many years we have been touting mobile SFA applications as tools that sales representatives can use to report to their bosses upon leaving the big sales call.  But now imagine if during the sales call, the rep had the ability to reach out through the mobile umbilicus to get help on any subject.

Sure, the mobile phone has always been available to do the same but few of us took advantage of it because its use was so disruptive in a meeting setting.  But a collaboration feed is more discrete so that not only could a rep report back after the meeting but he or she can now reach out through a collaboration product like Chatter rather than saying those dreadful words, “I’ll have to get back to you on that.”

Put the two ideas together and making Chatter the primary interface for CRM or SFA makes all the sense in the world.  Also, you need to consider that just as we can dream up a realistic use case for selling, the same is true for service and support or even marketing.  Quick aside, CMO, Kendall Collins, who was also at the event told me, “There’s only one sin we won’t forgive inside Salesforce and that’s losing alone.  If you’re going to lose, lose with all the support you need.”  In other words go down swinging and in other, other words, business is now, more than ever, a team sport.

So I am more sanguine about the move to make Chatter the primary interface for Salesforce.  It’s a natural evolution, something whose time has come.  Cue the music.

I am also skeptical that the big news coming out of Boston was this Chatter tidbit.  The discussion involved people from not only MIT but Harvard Business School and Yale as well as representatives from the private sector like the electronics giant Phillips and Stratus the fault tolerant computing company and they are all and already moving the collaboration needle.

Salesforce, as usual, is on to something.  The messaging about becoming a customer company is almost right and will improve over time.  And if Coffee’s intuition about having Andrew McAfee in the pre-show is right (and I think it is) then in a couple of years we’ll see other vendors ponying up with their own similar messaging just as sure as today they are (finally) “all in”, as someone once said, about the cloud.

One response to “Chatter to Become the Primary Salesforce Interface”