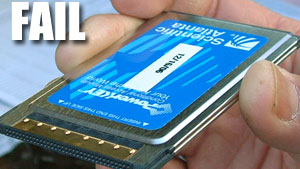 Yep, total failure. There is no real 3rd party marketplace for CableCARDs and what the network operators provide is limited in functionality while costing the same as a set top box (e.g. Comcrap’s CableCARD doesn’t support on demand). On top of everything else, the signal processing capabilities in the CableCARDs was suspect, in my own experience I found the image to be highly pixelated compared to set top boxes.

CableCARD was supposed to be the fix, but it was slow to deploy, was never widely supported, and had huge limitations. Early versions of the host spec supported only one-way access, so electronic program guides, video-on-demand, and other two-way services didn’t function. The FCC then tried to force the industry’s hand, all but demanding innovation by requiring cable operators to use CableCARDs even inside their own leased set-top boxes, just to level the playing field.

[From FCC admits CableCARD a failure, vows to try something else]

The cable industry has a boot to the neck of consumers and Comcast in particular is intent on having a piece of it’s equipment between every television and cable end on their network. As I wrote here, they have been successful in dismantling the very notion of “basic cable” and it was one of the reasons why I dumped them for Directv.

With the tech industry preoccupied with the FCC regulating the internet I am concerned that cable companies will use the time to tighten their stranglehold on customers. Given the way that licensing works these companies are operating regional monopolies with government stamps of approval yet there is little in the way of on the ground regulatory action that is intended to increase competition. As convergence between the Internet and television draws nearer this is not a good set of conditions to deliver innovation in, and with Comcast acquiring content networks there is much to be concerned about.