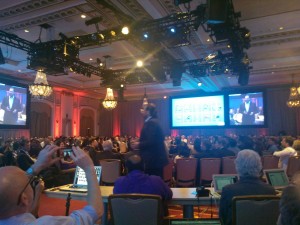 Announcements are flying around San Francisco like electrons around a Uranium nucleus.  I am here for a few days as a guest of Oracle to receive a comprehensive briefing on the company’s products and directions (more on that soon) and if that was the only thing going on it would be substantial.  But today, Salesforce is making announcements that extend its marketing cloud with the addition of Social.com.

Social.com further extends the company’s growing franchise in things named dot.com like Desk.com, Work.com, Data.com and, of course, Salesforce.com.  And while you’d expect the company that has led the social business revolution to eventually come out with something like this, you will be surprised to learn that Social.com is a social advertising platform that leverages the strengths of Radian6 for social listening and Buddy Media for social campaigns all integrated with the company’s flagship CRM to produce an advertising paradigm that stands Mad Men on its head.

Where the ancient and honorable advertising paradigm has been unsolicited, one to many and relatively untargeted, the Salesforce Social.com approach is pretty much its opposite — engaging, transparent and targeted.  Just what the doctor ordered in an era when broadcast media in all its forms is in an economic death spiral (keep the media, FF the ads) and too many companies are still dipping a toe in the social waters rather than splashing around and learning to swim.

This changes that.  Salesforce has an impressive array of customers already piloting the products, which are scheduled for GA in the Summer 2013 Release including Ford, General Electric, HP, Caterpillar, Burberry and Unilever.

As I look at this, it strikes me that social advertising is nice but what still needs to be fleshed out is fulfillment.  It’s one thing to stoke demand with better targeting but it’s another to close the deal — otherwise, why bother?  This announcement alludes to the importance of integrating CRM to the process and I suspect this is not the end of the story.  There has to be a fulfillment piece that extends through CRM and ultimately connects with ERP and logistics — perhaps an alternative channel to ecommerce?  So this is an important announcement but it sets up additional announcements that could be even bigger.