As a former neuroscientist, Neuromarketing is close to my heart. At its essence, its leveraging how consumers store, represent and respond to information about a product or service in their heads. And to do so in such a way as to stimulate reactions in the key areas of the brain.  And because we react 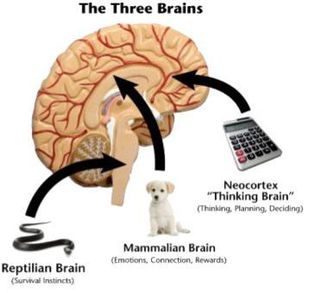 differently to stimuli in our world, dependent on which neurological structure is activated, its important to understand the brain and its functions.

The evolution of the brain occurred in three primary stages (image courtesy of Noah Laith’s blog). The most rudimentary component of the brain- and the oldest is the Reptilian brain, where basic impulses, instincts and even our rituals reside.  It helps us meet very fundamental needs –  to survive, to dominate our environment and to mate.

The most recent evolution of the human brain is the Neocortex, where rational thought, logic, reasoning, and language resides.

The act of buying and owning anything has emotional, instinctual and rational elements to it. Buying a car, for instance, evokes strong emotional responses from our brains, especially our reptilian brain. Own or have a passion for a Hummer?  It’s a war machine. It says if you want to fight, I can fight.   SUVs evoke similar feelings in individuals. In the neocortex, where rational thought resides, we all realize that tall SUVs are more likely to roll over than a smaller car. Yet the reptilian brain,  feels that being up higher makes you feel bigger and taller, and thus safer.  There’s a constant struggle within our different brain structures when we are marketed to.  That’s why successful neuromarketing evokes powerful thoughts, emotions and responses in each major functional area in the brain.

Products, brands and marketing programs which appeal to all three evolutionary components of the brain outperform those which don’t.  The goal of which  is to move the consumer closer to buying the product by leveraging positive memories of the product and  the emotion associated with it.

Memory is important because if  the brand or product isn’t memorable, you won’t buy it and you won’t tell someone else about it. Emotion is important because all perceptions go through the amygdala, the seat of emotion, before they go to the cortex . The amygdala checks all perceptions for emotional relevance. The stronger the emotion, the more we pay attention to it.  To make our brand part of your customer’s social identity, we have to make our customers feel different than the people who use competitive solutions. The sharper the distinction (even if in real terms it’s not all that meaningful), the more effective this strategy will be.

The LexisNexis  Real Law Campaign  is one of our top performing campaigns to date.  Why?  Its infused with neuromarketing principles.  Each campaign, besides having a content marketing element, has what we call, a Real Law Haiku, a three pronged argument which is structured to appeal to a rational, emotional and instinctual thought process. As an example,

“This is waking up at 5 AM” (purely an emotional appeal…we all know what it feels like to have to wake up early and if you do, how motivated you are)

“This is winning your case” (a reptillian appeal to dominate, and an emotional appeal related to the rewards that come from winning)

This approach is then followed up on the Real Law hub where individuals can read posts that appeal to them on a variety of cognitive levels, emotional, logical and impulsive/instinctual.  This content management strategy is critical to successful neurmarketing.

So if you’re not thinking about appealing to the human and beast in your marketing efforts, its time to start… its the human thing to do.

One response to “Appealing to Man & Beast: Neuromarketing Strategies”