Day 1 at IBM Impact 2013, following a keynote full of loud drums, rotating cars and a cat video, David Millen and Kramer Reeves gave a presentation on IBM’s vision for Smarter Process, which focuses on improving process effectiveness with BPM, case management and decision management. There are a number of drivers that they mentioned here that we’ll address in our panel this afternoon on “What’s Next For BPM” — the big four of mobile, social, cloud and big data — with the point that the potential for these is best seen when tied to mission-critical business processes. Not surprisingly, their research shows that 99% of CIOs looking to transform their business realize that they have to change their processes to do so.

Processes are not just about internal operations, but extend beyond the walls of the organization to take the customers’ actions into consideration, binding the systems of record to the systems of engagement. Therefore, it’s not just about process efficiency any more: we’re being forced to move beyond automation and optimization by the aforementioned disruptive forces, and directly address customer-centricity. In a customer-centric world, processes need to be responsive, seamless and relevant in order to engage customers and keep them engaged and well-served, while still maintaining efficiencies that we learned from all those years of process automation.

This isn’t new, of course; analysts (including me) and vendors have been talking about this sort of transformation for some time. What is new (-ish) is that IBM has a sufficiently robust set of product functionality to now have some solid case studies that show how BPM, CM and/or DM are being used with some configuration of mobile, social, cloud and big data. They’re also emphasizing the cross-functional approach required for this, with involvement of operations as well as IT and line of business teams.

Their key platforms for Smarter Process are BPM, Case Manager and ODM, and we had a summary of the relevant new features in each of these. BPM and ODM v8.5 are announced today and will be available in the next month or so. Here’s some of the key enhancements that I caught from the torrent of information.

Blueworks Live, for the enhancements already released into production a couple of weeks ago:

The Case Manager stuff went by pretty quickly, and wasn’t included in my pre-conference briefing last week, but I think that it’s significant that we’re (finally) seeing the FileNet-based Case Manager here at Impact and on the same marketecture chart as BPM and ODM. I’m looking forward to hearing more about the level of integration that they’re going to achieve, and whether the products actually combine. 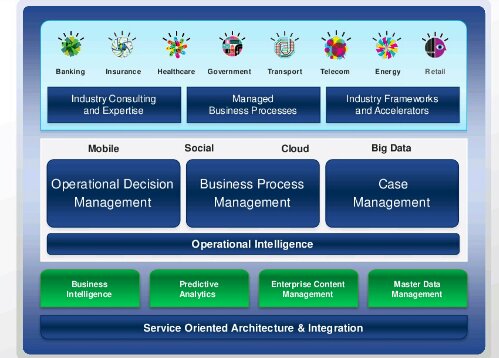 Underlying the main product platforms, they’re leveraging Business Monitor and ODM to develop operational intelligence capabilities, including predictive analytics. This can gather events from a variety of sources, not just BPM, and perform continuous analysis in real-time to aid decision-making.

They are also including their services offerings as part of the Smarter Process package, supporting an organization’s journey from pilot to project to program. They offer industry solution accelerators — I assume that these are non-productized templates — and can assist with the development of methodologies and a BPM COE.

There are a number of breakout sessions on the different products and related topics over the next couple of days, but I’m not sure how much I’ll be able to see given the hectic schedule that they’ve given me as part of the analyst program.

Apologies for those who saw (briefly) an earlier version of this post; the new version of the WordPress Android app has a new button, and I went ahead and clicked it.

One response to “Smarter Process At IBM Impact 2013”