Is the window closing on enterprise customer communities?

A surprisingly few number of people engage significantly with the companies they care about via social media, as little as 4% according to new research, despite the vast majority of businesses investing in or planning to invest in various forms of social media this year.

Exactly why this is the case has various causes. These range from companies awkwardly adapting to social media and using it like a traditional one-way marketing channel in order to push out unwanted messages to the fact that people typically participate in social networks for more personal, non-business reasons. Yet that 4% still represents a vast audience of many millions of engaged individuals, and there are no doubt millions more who would engage with businesses if there was a compelling reason why and a good way to do it.

I also believe these figures almost certainly underrepresent the leading minority of organizations — the stand-out success stories like SAP, American Express, and Pitney Bowes — that are in fact connecting productively today with their customers and other constituents via social media and online communities.

Most of this is not actually news. The challenges of adapting social media to the classical enterprise are manifest and well known at this point, yet the benefits in doing so continue to get clearer, even as the current data consistently show that far from giving up, more companies are continuing to gear up to organize for social business.

For its own sake, the motivation for businesses to gather their stakeholders around them in digital communities is increasingly clear cut as the data on outcomes continues to improve. For instance, a major study conducted last year concluded that revenue from customers that are engaged in a company’s community is 19% higher on average than those that aren’t. Big companies have apparently gotten the message on this: The same study also found that half of the top 100 brands already had customer communities in some form. If that weren’t enough, IDC recently found that online communities are the clear #1 area of interest this year for businesses in general when it comes to social media. 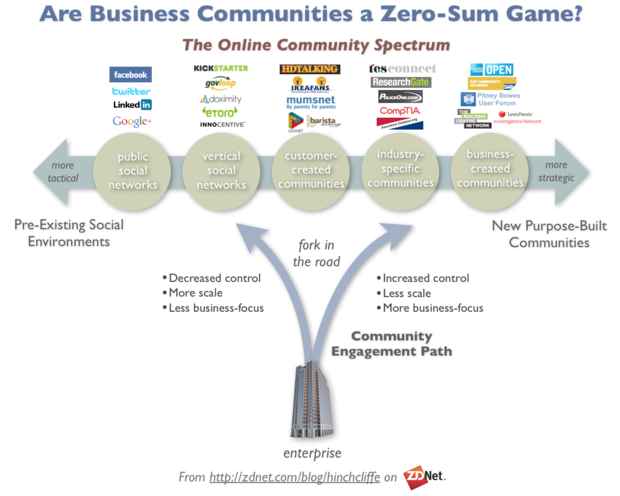 The value of customer community has finally percolated to the executive level as well: The value of forging strategic digital relationships with customers is now in the forefront of management thinking today. In a typical example of what business leadership is hearing about now, Bill Lee observed on the Harvard Business Review site recently that building communities is where one of the largest reservoirs of untapped value lies. The goal: Holding one’s customers closely and then harnessing the considerable opportunities for making proactive use of their creativity and bandwidth, cultivating closer and more sustained ties with the company, enabling peer-produced customer care, and providing recognition and status, among other benefits. Lee also noted:

[With customer communities] your prospective customers and buyers increasingly learn about you from their peers — including your current customers — while tending more and more to ignore traditional sales and marketing communications from corporate. Companies are now taking advantage of this new marketing reality, becoming more skilled at getting their customers to advocate for them, create peer influence in their markets, and make important contributions in areas like product development and services.

But companies have to either tap into existing communities or build their own. And at this point, with available social media attention reaching saturation — as with all things digital — is there actually room for new companies to establish their own communities? Or has the window closed on major new efforts as most industries already have a market-leading community?

To answer that question, we need to look at some basics for what it takes to create a successful customer community.

Is It Really Too Late To Start a Customer Community?

Now that companies have been building close relationships with their customers in social media and online communities for a while now, my research has shown several key traits that are generally required to be successful:

The first is committment, both in activation participation from business units — but especially by senior executives — who will stand behind it and provide the needed resources, often for years, in order to see the community flourish. Some of the best examples, SAP Community Network’s 2.5 million engaged customers/partners or Intuit’s millions of Live Community participants, both of which have been around for many years and are considered strategic assets by their organizations.

Second is a vibrant community itself, a voluble mix of customers, business partners, employees, company executives, and other interested parties. Sustaining a community over the years required active investment in community management as well as the regular (some would say constant) co-creation of valuable and otherwise hard-to-obtain shared knowledge, experience, wisdom, and other types of content. All of these are necessary to have a “there” there and keep the community flowing, growing, and evolving.

While there are more, these top two success factors — when taken together — have an important implication for customer communites in a given industry, even for high-affiliation brands: They create what is known in the digital world as a network effect. This basically says that as the larger and more successful a community gets, it becomes intrinsically richer and more valuable exponentially through the sheer sum of its members and their combined participation. In other words, network effects — and therefore social networks — tend to be a zero sum game: If a potential new community member has limited time — and we all do — why go to the second best community, when you can just go to the very best one for the subjects one cares about?

While I’m in the process of mapping out the online communities for top industries including financial services, manufacturing, health care, public sector, IT, legal, and so on — and yes, I plan to share that breakdown here soon– it’s clear that in each industry, and often in sub-sectors, there is a definitive leader with most of the other customer communities being either nascent, very niche or outright struggling. Analogous to the famous Civil War saying, it seems that when it comes to customer communities in a given industry, “whoever gets there first with the most people, wins.”

Although this doesn’t seem to hold when it comes to a few truly exceptional and stand-out brands, it does seem to hold for most companies. In other words, if your competitor is years ahead of you in cultivating customer communities, you can certainly create your own, but even your customers are probably deeply involved in the ones that exist already, as they’re currently the most exciting place to talk about your industry and engage with those with similar professional interests.

For Some Industries, The Window Of Opportunity Is Still Ajar

The corrolary however is interesting, namely that if your competitors have not yet gotten very far, then there’s still time to not only start, but even gain the lead. I see that entire industries typically get the community bug at about the same time. Someone proves it works and then everyone jumps in. We’ve seen this in the technology industry, media, financial services, professional services, crowdfunding, and many other areas. However, I find that there are still a few whitespaces open.

But the overall trend is clear. The window is increasingly closed on industries where customer communities have become fairly mature. However, it’s still open in some others, but won’t be for long. Enterprises that want to establish the upper hand and build an uncatchable communuty network effort have perhaps a year or two. After that, it will be increasingly hard to play a winning game. And an important game it’s becoming too:

Those that control and wield the primary digital/social relationships with customers in a given industry are clearly slated to become the annointed winners.

There are many interesting implications to this, in terms of what many would otherwise consider anti-competitive behavior, as well as what it means for the future of how business fundamentally gets done.

There’s another important decision point we can’t forget as well. Looking back on how organizations have engaged with the social world, a broad pattern has emerged: You can either go to existing social environments and find ways to connect with your constituents there, following the rules and other constraints you find there, or you can create your own digital communities.  I would observe that in the winning stories I’ve seen, almost entirely, they’ve taken the right path in the diagram above, creating the communities themselves, from the platform on up, and owning the data, relationships, and customer experience. Facebook, Twitter, and LinkedIn are important social channels and key component to customer engagement today, but they’re usually not viable customer communities at a strategic level.

In short, if you build it first/best, and give them a good reason to come, they will.

One response to “Is the window closing on enterprise customer communities?”