Evangelizing development on any cloud computing or enterprise platform is challenging, costly and takes a unique skill set that can educate, persuade, sell and serve developers at the same time.

The companies who excel at this exude technical prowess and as a result earn and keep trust.  For Cloud Infrastructure as a Service (IaaS) platform providers, getting developers, both at partner companies and at enterprise customers to build applications, is a critical catalyst for future growth.

Assessing Cloud Infrastructure as a Service Providers with Inquiry Analytics

Using the Magic Quadrant for Cloud Infrastructure as a Service, 2012 published October 18, 2012 as the baseline and shown above from Rueven Cohen’s excellent post last year, the five leaders were compared using the Inquiry Analytics Statistics: Topic and Vendor Mind Share for Software, 4Q12 published March 13th of this year.  Analyzing the five leaders in the Magic Quadrant using Inquiry Analytics shows that Amazon Web Services (AWS) was 57.1% of inquiry share worldwide for application development  during the 4th quarter of 2012.

From 4th quarter 2011 to 4th quarter 2012, Amazon Web Services showed just over 10% inquiry gain against the other vendors listed as leaders in the quadrant.  Only five vendors can be compared at once using the Gartner Inquiry Analytics tool so the leaders were included in the comparison first. 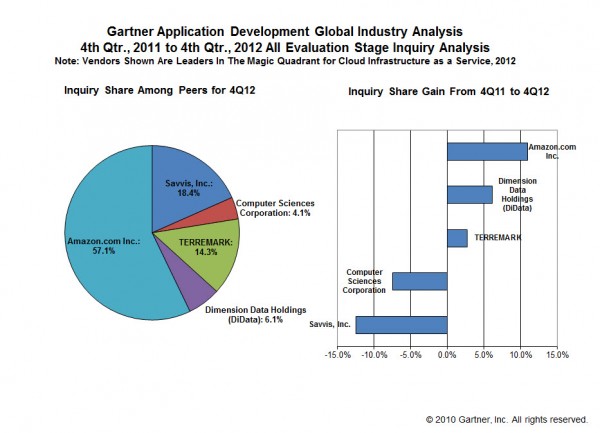 Bottom line: The land grab for developers is accelerating on IaaS and will be a major factor in who establishes a long-term cloud platform for years to come.