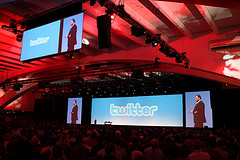 Not attending Dreamforce, it appears I missed a telling moment, the irony of which I would have enjoyed had I been there to witness it in person. It seems Salesforce.com has announced a new feature named after that most social of activities, Chatter, which aims to bring to the enterprise the functionality seen in social network tools such as Twitter and Facebook. But as Marc Benioff later told a gathering of press and analysts, it’s not a social network, oh no.

As I wasn’t there I can only go from what’s been reported. But it seems Benioff (no doubt guided by his marketing advisors) has decided to follow the advice promulgated at the recent Enterprise 2.0 conference in San Francisco — by no less a figure than Enterprise 2.0 guru Andrew McAfee — not to overuse the word social in front of business software buyers when talking about, erm, social computing. “I have rarely come across a word that has more negative connotations to managers in enterprise organizations,” McAfee warned his audience two weeks ago.

Benioff this week was devastatingly forthright about why social isn’t going to figure in his sales team’s lexicon when they tell customers about Chatter. According to VentureBeat’s Anthony Ha (my emphasis added):