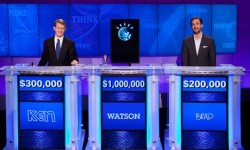 I was discussing Watson, the IBM super silicon brain that won Jeopardy! the other day with a reporter writing an article.  Around the same time, I was also looking into Google Glass, the wearable computer that enables people to record what they see and to see what they’re recording through a teeny tiny screen mounted on a frame over their eyebrows.  It’s all very Buck Rogers or Dick Tracy or Special Forces or just so last week depending on your worldview.

Then it occurred to me, as I am sure it has occurred to many other people, that the two things could/would/should merge especially as wearable computing is already nearly passé and on the way to being replaced by implantable computing which could rapidly give way to ingestible computing once they figure out how to, you know, make the ingestion part more or less permanent.  But now I am racing ahead of myself by at least seven years.  Besides, what kind of sauce goes with ingestible computing?  I’m betting on black mole.

Watson has a tremendous ability to learn and to digest huge volumes of input to come up with an answer.  I was told that to appear on the Jeopardy! program, Watson’s handlers force fed it about 200 million pages of structured and unstructured content.  I also recall from the show, that most of Watson was not in the studio with the other contestants because it’s less of a computer and more of a network.  No matter though.  Google Glass would be the thing that could put all that hardware out of mind.  Glass: the killer app for Watson?  Hmmm.

Glass Watson might be great in any high-pressure situation where snappy answers are important.  That would not include things like stock trading assuming Watson is already doing that sans any help from carbon-based life.  Glass Watson might be a lot of fun in a traffic stop.  “Really officer the light was yellow” or “I was going 37.593 MPH in the 35 MPH zone officer.”  And in social situations where it’s hard to read the social cues Glass Watson might be a boon to introverts like me who want to be more lifelike.

Naturally, those social situations extend to vendor customer interactions especially where selling might be involved.  A retail clerk with a Glass Watson might be able to assess a customer better and faster than a human though I have to say that twenty years later I am still in awe of the woman in a Nordstrom store who nailed my shirt size in the blink of an eye.

But what if the customer has a Glass Watson too?  Would we then be in a situation where the people are skipped over entirely?  I worry that my Glass Watson would like everything it sees and the retail Glass Watson would scour my bank accounts even finding the one I misplaced in Geneva (maybe it could retrieve my passwords) and over sell me on everything thus turning into a Glass Watson Hoover as in a vacuum cleaner for my wallet.  All of this could happen in the blink of an eye.

Still, I always come back to Groucho Marx, an interest I share with Paul Greenberg.  Groucho once quipped, “Time flies like an arrow.  Fruit flies like a banana.”  What would Watson do with that?  I wonder if you can get Google Glass with one of those fake Groucho moustaches?  Now that would be cool.