Barely more than a year since SAP made its bold move into the cloud with the very expensive acquisition of Successfactors, does the hotshot visionary and symbol of the attempted “new look SAP” leave the firm… Lars Dalgaard. 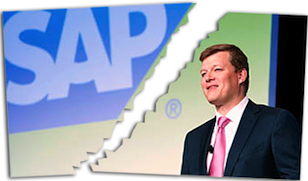 Anyone who has met Lars over the last decade has been drawn to his incredible passion and vision for the future of enterprise software with the shifting sands away from legacy on-premise software and expensive lock-in licenses.

Lars joining SAP was the acid test as to whether old-world ERP vendors could find a rapid path into the shiny new world of cloud and multitenant delivery models for enabling global business operations. He was a true visionary who had almost single-handedly taken on the legacy enterprise software firms, building up Successfactors from nothing to something, that would entice SAP to part with $3.4 billion to take it out.

Lars leaving so quickly symbolizes SAP’s struggle, in my mind, to change its culture and approach to disruptive business models. The economics of the cloud cannot print anywhere near as much money for our German friends as the current legacy ecosystem of clunky enterprises, whose IT managers simply do not want to invite change or disruption.  If your clients don’t want to change, why should you?

Net-net, SAP has created a nice cosy industry around itself that has created, literally, millions of careers.  What are all these developers and project managers going to do if companies suddenly had single instances of SAP available in the cloud?  What are many of the service providers going to do if they can’t earn tens of billions trying to stitch all this stuff together?  And what would SAP do if it can’t command such incredible revenues from its consulting, services and multiple-license revenues?

The startling truth is that there is a $255 billion industry (Source, HfS Research) that feeds off this ERP chaos and dysfunction centered around both SAP and Oracle, and and estimated $156 billion of this is purely the annual cost of keeping enterprises’ SAP worlds ticking over in 2013; the external services, the licenses, the hosting, the internal staff to maintain and develop the software etc.

Why do you think these little upstarts, such as Successfactors, Workday, Netsuite and SFDC command up to 40 times their annual sales income in valuation?  Because they threaten the status quo of a much, much larger industry that is scared stiff of being blown out of the water by disruptive technology: 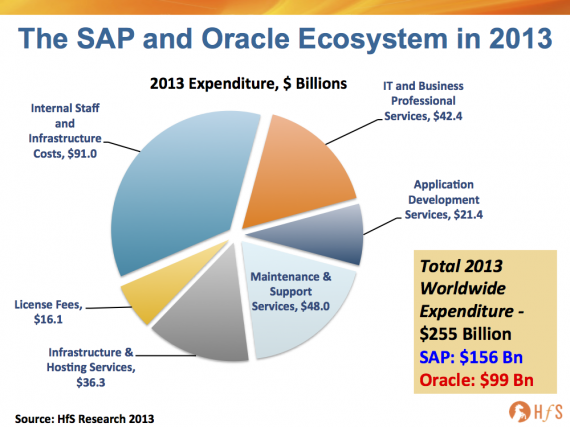 While the decrepit old enterprises stick to their legacy IT infrastructures, the evolving mid-market firms are breaking the mold

I recently spoke to a senior executive at a legacy software vendor stuck in multi-instance and fake-cloud land, who confided “we’re purely in the protection business now.  All the new logos are going into Workday.  Fortunately our existing clients still spend enough to keep us solvent.”

This pretty much confirmed my viewpoint that it’s the small to middle-market organizations (under $5bn in revenues) seeking technology and sourcing solutions that can drive nimbleness and cost-effectiveness, as they simply do not have the people and technology resources within their IT, finance, HR, marketing and supply chain operations to manage their evolving needs.  Moreover, many of these organizations are moving from prehistoric infrastructures to cloud-based ones… bypassing much of the painful inch-by-inch transformation where so many of today’s high-end enterprises are stuck.

As the existing high-end business opportunities slowly shrivel up, the new logo opportunities are springing up in the mid-tier, will the likes of SAP and Oracle be equipped to take them on, when compared with the evolving array of developing cloud solutions from the upstarts?  Remember, many of these new mid-tier logos will make up a significant chunk of the F500 in the future… so clearly the failure to evolve to true cloud models is eventually going to come back and bite the incumbents. Surely they can’t keep spending billions and billions on new acquisitions to control them when they start to hurt their business?

The Bottom-line:  The evolution to the cloud for firms likes SAP is simply way, way to slow for a guy like Lars

SAP’s enterprise customers, and many of the services giants which feed off the beast, are still many, many years from being forced to evolve, but one thing is clear… eventually they will be forced to comply.  The big question is whether it’s still another 5, 10 or 15 years away…

Simply put, SAP was never a place for the likes of Lars…  and won’t be for many years to come.  There is no burning platform for SAP to really jump into the cloud just yet, and guys like Lars do not work in the slow-change business. When that burning platform does come, it will need people to change the mindset a lot more aggressively than they are prepared to in today’s market.  Maybe then, they’ll wish they had a Lars to call on.