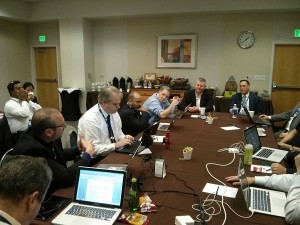 To CRM or Not CRM.. That is the question.

This is the first in a series of posts where I just try to catch up on the latest shows around the country I attended between April and May.

The “spring season” was so well populated, and so busy, that I almost had no chance to write about current events.  I have four or five posts to catch up here (NetSuite World, SugarCON, InfusionSoft, and the combination of Allegiance and Medallia that led me to the new model for Feedback Management I am putting together – and that you get to see the early drafts here).

I am going to give you the good/bad/great/ugly in these posts and the overall impressions to supplement the tweet-to-tweet coverage of these events – either by me or someone else – while they were going on.

Let’s begin – NetSuite World was one of the first.

Great: NetSuite announced their intention to move their product to certain verticals and specialized functions (which is great, it aligns with one of the top requirements from customers to vendors these days: deliver value by delivering verticalized solutions).  To this end they introduced at the event one of the first partnerships for this: Autodesk and NetSuite announced their intent to take PLM to the cloud by combining their forces and creating an unique cloud-based solution.  This is very good news for customers of both that were looking for deeper integration, of course, but more than anything because it accomplishes three things that were not thought possible before:  1) puts ERP and PLM together in the cloud; 2) lays the groundwork, when and if it works, for NetSuite to further differentiate from other ERP vendors; and 3) settles the argument to the value for a 2-tier ERP strategy by bringing value that any of the Tier 1 vendors could not do so easily.

Good: In a move that made me reminisce of Mr. Benioff’s early days talking to customers at his event, CEO Zach Nelson brought on stage representatives from Williams Sonoma (parent company among other brands to Pottery Barn and associated brands) to explain how NetSuite enabled them to move their entire business to the cloud and save money and time by creating value propositions that were not before possible for them.  During the press conference, Williams Sonoma’s CIO John Strain said they are using CRM from NetSuite due to the easy integration (please stay tuned for more on CRM – which became a very interesting discussion at the said press conference)

Bad: During the entire keynote, and in most of the other sessions I was able to attend, the mentions  of CRM were kept to an absolute minimum (I initially said it was not even mentioned once, but one of my fellow analysts reminded me that during one of the slides they presented there was a box that said “CRM” – so will say it was kept to a minimum).  I am not going to say that an ERP manufacturer should focuses too much on CRM – but the main problem was the shift from the year before to this one: last year Social Business, Social CRM, and even plain-old CRM was featured in the program and keynote – this year, it was as if it almost did not exist.  I have no issue with them no longer providing it – I have an issue when two of NetSuite executives tried to convince me that they are the only company that provides “the REAL CRM” since they have order information that no one else has, or when they try to tell me that CRM is there, but we don’t see it because is a different flavor of CRM.  Not going to dwell on it at all, but I suggest they get a better story about it – CRM (or the new incarnation of it with the new cute name – yet to be found) is a critical part of managing any business – whether they are B2B or B2C – since it makes customer interactions better (and in the new incarnations, does the same for partners, suppliers, employees, and alliances).

Ugly: The good news of the ugly: they are not the only vendor who does this.  The bad news: they even got their customers on stage providing “testimony” into the game.  The name of the game? Not sure what to call it, but it was about putting down other vendors as unoriginal, not good enough, not creative, and providers of a bad product and worse experience for their customers.  I said this before, vendors should focus on highlighting what they do well and capitalize on what others don’t do so well to win.  Bringing other vendors down by attacking them is petty.  Involving your customers into it (even if they are willing and believe in it) is worse.  I have many allegories to drive the point home – but none of them are nice enough to publish.  Bottom line: make the best product, promote your product, and let the competition shoot themselves in the foot (if they are as bad as you say they are it should be simple).  Stop badgering other vendors.

Overall Impression: I am impressed by the speed at which NetSuite is adapting to being in the cloud and leveraging their position to offer something different.  I think that the partnerships with Autodesk is a pivotal point in the transition ERP is taking to become more cloud-centric,  I also heard of other partnerships and alliances that were lined up (CapGemini comes to mind) to offer a more complete ecosystem (which is slowly becoming the next generation of enterprise architecture thanks to the increasing adoption for cloud technologies in organizations).  I wish they would take a different approach to CRM, more mainstream – order management is not an integral part of CRM and it is an outdated view of it to think CRM is only for sales – and more focused on end-to-end experiences that encompass both front-end and back-end operations.  I am looking forward to see how they put that piece together in the coming months.