Digital diaspora in the enterprise: Arrival of the CDO and CCO

When they write the history of the early days of the networked era, it will be noted that the centralization of technology services in most enterprises largely ended within a few decades of the arrival of the Internet. Networked technology became so profoundly widespread, pervasive, and inexpensive, that the sheer variety and richness of the cloud first swamped and then disintermediated the old methods of providing a few approved apps and devices. What’s more, as all forms of digital became more and more central to the core business models of organizations, the traditional IT department began to lose a growing portion of the strategic discussion around technology.

There have been suggestions that organizations now need C-level officers focused on everything from corporate data and customer experience to digital strategy and social media.

Or at least that’s what they’re likely to write, based on current trends today. For instance, bring-your-own-device (BYOD) programs — and now bring-your-own-apps (BYOA) — are the proverbial canaries in the coal mine for these trends. They have empowered vast new digital armies of workers in the trenches, with a large majority (80%+) of organizations adopting BYOD, and many now exploring BYOA, in just the last two years alone. At the same time, other purviews within our organizations have become core investors in high technology, with CMO budgets reported to eclipse IT itself in 3 years due to this factor. Perhaps most significantly, sober voices are now saying that shadow IT (meaning technology not under the control of the CIO) is expected to reach 90% of all enterprise IT spend by the end of this decade, up from just 10-20% a decade ago.

Clearly big changes are afoot, but where they’ll finally end up is a bit harder to surmise. As indicated above, the root causes are many and varied. However, the overall digitization of 1) market/customer engagement and 2) corporate sources of revenue — along with the digital transition/integration of our companys’ products and services themselves — are the most significant and impactful factors driving change.

As this has played out so far, everyone’s budget is rapidly becoming the “real” IT budget. This democratization of IT has had significant organizational implications as digital transformation fundamentally remakes our organizations. Or at least the ones that manage to adapt to the current uber-connected, deeply integrated, data-fueled, app-centric, highly mobile, customer-focused, and socially engaged state of the global marketplace. 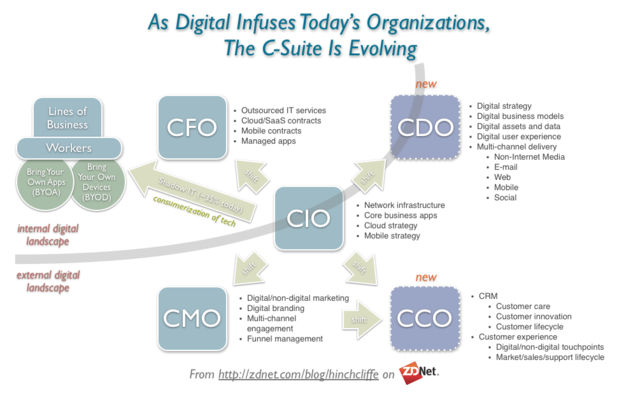 Thus, most companies have become increasingly misaligned with today’s fast-moving new market conditions and they generally know it.

One of the ramifications of this is that the C-suite is consciously attempting to evolve in reaction to the growing digitization of business. There have been many discussions of late about what this should entail, including suggestions that organizations now need C-level officers focused on everything from corporate data and customer experience to digital strategy and social media.  Probably the two new roles most frequently discussed at the moment are a Chief Digital Officer (CDO) and a Chief Customer Officer (CCO), both of whom would impact the CIOs and CMOs of most organizations in a non-trivial partitioning of roles, resources, and responsibilities.

But just as companies generally don’t have a Chief Marketplace Officer or Chief Channel Officer, the strategic concern here really isn’t about the general business landscape or digital plumbing, but about the people in it and the data that concerns them. And this is where companies are moving slower, even if they just maintain their current pace of adoption. That’s because digital innovation in-the-large has only continued to accelerate. The rate of change is increasing and companies response to it isn’t: On a daily basis, several thousand new mobile apps become available, while on a broader horizon the amount of data our businesses must respond to doubles at least every 1-2 years. So too are the methods through which we have to engage with and respond to our customers. The deltas on every front look similar.

The key qualities challenging our management of technology today are therefore fragmentation, velocity, variety, volume. These are the obstacles our organizations currently face in scale across our delivery channels, products/services, constituents, revenue sources, and management time, though there are certainly viable strategies to address some of them.

Related: A new reality between the CMO and CIO.

So what are organizations going to do about the rise of digital and challenes it brings? What then is the best route to adapt the structure of our organizations, from the management team on down, to better define, adapt to, and seize the generational opportunity of realizing a successful digital strategy in a highly social, mobile, etc. world?

There seem to be two broad approaches, one top down and other bottom-up:

The reality is that organizations will do both of these things: Add more C-level executive oversight to digital while they also attempt to broaden their technology adoption base internally on the ground (making everyone part of the IT department, essentially, just like everyone is part of the social media team.) While this might have been somewhat controversial even a year or two ago, it’s now clear that this is the likely route for most companies, even as they have to vigorously compete with many digital startups trying to displace them with a purer and more savvy approach not hindered by their legacy constraints.

The next half-decade will be very interesting indeed as digital strategy steadily moves from the 2nd tier to the top tier of management concern.

Is it time for a C-level social media executive?