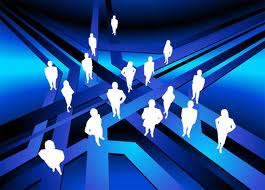 Enterprise social networks (ESN) are one of the oldest enterprise social technologies and have evolved into an important backbone of enterprise social activities. While some of the current ESN vendors, generally ones that started in some adjacent markets like blogs and wikis, have been around for over 10 years, the current set of key functions happened in the past 5 years. What started in much the same way as all innovative enterprise software, as a movement of small startups with some basic premise that work was changing and that business people were looking for new ways to work together that emulated the user experience of the public social tools like Facebook, and Twitter, but with enterprise grade security, scalability, administration, and manageability. In fact this market is a prime example of the effect of the consumerization of IT trend that you hear so much about. We’ve moved out of the startup phase though, and probably almost out of the consolidation phase. Over the past 3 years many of these smaller startups were acquired by the enterprise SW giants like Microsoft, SAP, VMware, etc. As this market matures it’s time to take a look at the driving trends and the current vendor / technology landscape.

From a solution perspective ESN solutions are falling out into three categories, stand-a-lone ESN platform, embedded ESN solution and specialty ESN.  Stand-a-lone ESN platforms take the original “social layer” type approach by forming a new collaborative structure outside of the current enterprise applications. They can, of course, be integrated to other systems, but they don’t take the approach of operating inside the current enterprise applications. The integration takes the form of pulling information / data and events into the activity stream out of other apps. In this case the activity stream of the ESN forms a soft of new UI across the other apps and data sources to which it is integrated. The two largest vendors in the market today, IBM and Jive are both stand-a-lone.

The second category, embedded ESN solutions, are the most recent developments and to me, offer the most interesting evolution of how employees are using the tools to change they way they work. These tools seem to be taking a few different courses. The simplest is to provide an embeddable “widget” that allows the company to place a connection to the ESN activity stream inside any other UI / application. SocialCast VMware was an early developer of this approach with SocialCast Reach. The second approach is to integrate the ESN into the vendors other enterprise applications, straight into the workflow at the obvious points where using an ESN adds value to the process or requires heavy people to people interaction as a part of the role’s daily function. This would vary by role and application and need a certain amount of flexibility in the way it’s executed. Vendors / solutions taking this approach include SAP Jam, Microsoft Yammer and Oracle Social Network (OSN). The final approach is to embed the ESN into the middleware platform that sits under the applications, allowing the solution to be exposed inside apps in the same way as the 2nd embedded type. In fact the two are very similar with one important exception, if the ESN is inside the platform, then anything built on top of the platform can be socialized, even partner and customer custom applications. Vendors taking this approach include salesforce.com Chatter and Infor Ming.le. All three approaches work and have good points and limitations. The important thing is to get the access to the ESN at the point it is most needed inside the work, not outside as another disconnected tool. This opens up a much richer business context for the interactions / collaborations, something I think is absolutely critical for long term adoption and significant productivity increases. It should be noted that all of these embedded solutions can also function as stand-a-lone ESNs, that important too, as some roles generally work most of the time in some communication / collaboration tool, sales personnel for example, who are used to working in email will easily transition to a stand-a-lone ESN, as that fits the roles work needs and style.

The third type of ESN is what I call the specialty ESN, that is it has some specific set of functions or deeper feature sets in a specific work activity like task execution. There are many examples of these types of network that are either stand-a-lone or embedded inside another set of apps. This would include solutions like Deltek Kona, which is social task execution / project execution solution or Workday.

Here’s a chart that shows some more examples in each of the three categories, and although not meant to be an exhaustive list, does include quite a few vendors: 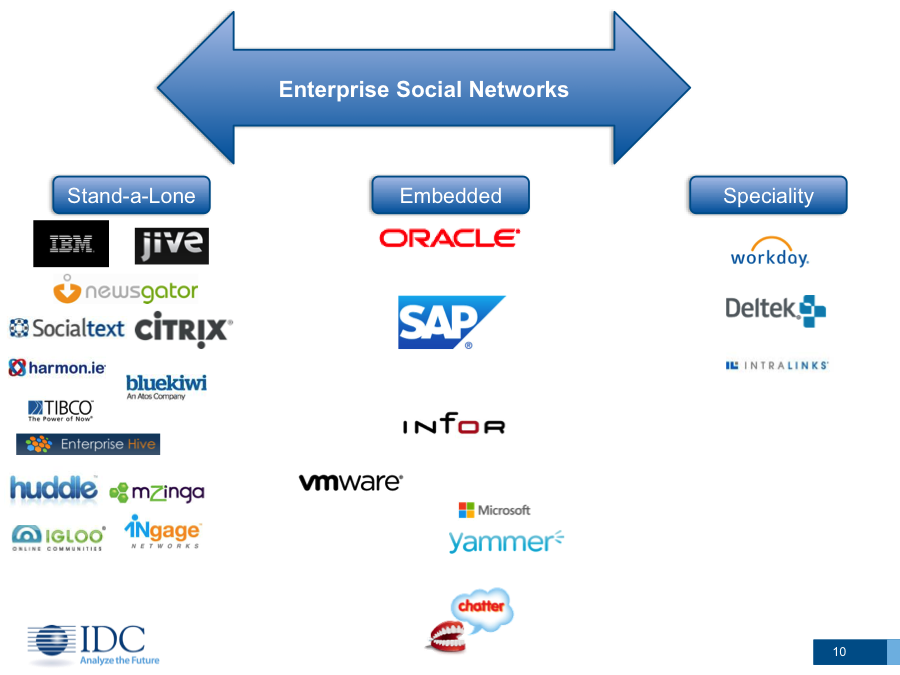 Also remember that this is a snapshot and that the vendors continue to evolve over time.

So that’s it for part one of the series. In part two I’ll look at the most common use cases and current adoption trends and statistics.Tags: ESN, network, social, socbiz, enterprise, applications, EA, software, collaboration