I had a briefing on the latest version of Alfresco’s Activiti BPM a couple of months back, but decided to wait until the news about their new partners – BP3 and Edorasware – was released before I posted. This strong showing of enterprise support partners is crucial for them following the defection of camunda from the Activiti fold, since many large enterprises won’t deploy an open source product without some level of support from the open source vendor directly or via their partner channel.

Alfresco’s interest in Activiti is as a part of their open source enterprise content management suite: they don’t offer Activiti as a standalone commercial open source product, only bundled within their ECM. Activiti exists as an Apache-licensed open source project with about 1/3 of its main developers – likely representing more than 1/3 of the actual development effort – being Alfresco employees, making Alfresco the main project sponsor. Obviously, Alfresco’s document-centric interests are going to be represented within the Activiti project, but that doesn’t make it unsuitable as a general purpose BPMS; rather, Alfresco makes use of the BPM platform functionality for the purpose of document flow and tasks, but doesn’t force content concepts into Activiti or require Alfresco in any way to use Activiti. Activiti is continuing to develop functionality that has nothing to do with ECM, such as integration with MuleESB.

Activiti was one of the first BPMS platforms to execute BPMN 2.0 natively, and provides full support for the standard. It’s not a “zero-code” approach, but intended as a developer tool for adding high-performance, small-footprint BPM functionality to applications. You can read more about full Activiti functionality on the main project site and some nuances of usage on the blog of core developer Joram Barrez; in this post, I just want to cover the new functionality that I saw in this briefing. 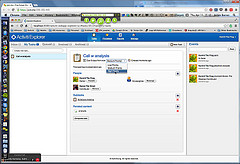 Like all of the other BPMS out there, Activiti is jumping on the ad hoc collaborative task bandwagon, allowing any user to create a task on the fly, add participants to the task and transfer ownership of the task to another participant. The task definition can include a due date and priority, and have subtasks and attached content. Events for the task are showing in an activity feed sidebar, including an audit trail of the actions such as adding people or content to the task, plus the ability to just post a comment directly into the activity feed. The Activiti Explorer UI shows tasks that you create in the My Tasks tab of the Tasks page, although they do not appear in the Inbox tab unless (I think) the task is actually assigned to you. If someone includes you as a participant (“involves” you) in a task, then it shows in the Involved tab. This is pretty basic case management functionality, but provides quite a bit of utility, at least in part because of the ability to post directly to the activity feed: instead of having to build data structures specific to the task, you can just post any information in the feed as a running comments section. Mostly unconstrained, but at least it’s in a collaborative environment. 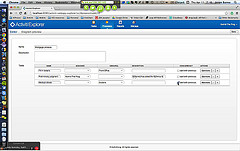 The other big new thing is a table-driven process definition as an alternative to the full BPMN modeler, providing a simpler modeling interface for business users to create models without having to know BPMN, or for fast process outlining. This allows you to create a process definition, then add any number of tasks, the order of which implies the sequence flow. Each task has a name, assignee, group (which I believe is a role rather than a direct assignment to a person) and description; you can also set the task to start concurrently with the previous task, which implies a parallel branch in the flow. Optionally, you can define the form that will be displayed for this task by adding a list of the properties to display, including name, type and whether each is mandatory; this causes an implicit definition of the process instance variables. The value of these properties can then be referenced in the description or other fields using a simple ${PropertyName} syntax. You can preview the BPMN diagram at any time, although you can’t edit in diagram mode. You can deploy and run the process in the Activiti Explorer environment; each task in the process will show up in the Queued tab of the Tasks page if not assigned, or in the Inbox tab if assigned to you. The same task interface as seen in the ad hoc task creation is shown at each step, with the addition of the properties fields if a form was defined for a task. The progress of the process instance can be viewed against the model diagram or in a tabular form. Indeed, for very simple processes without a lot of UI requirements, an entire process could be defined and deployed this way by a non-technical user within the Explorer. Typically, however, this will be used for business people to prototype a process or create a starting point; the model will then make a one-way trip into the Eclipse modeling environment (or, since it can be exported in BPMN, into any other BPMN-compliant tool) for the developers to complete the process application. Once the simple table-driven process is moved over to the Eclipse-based Activiti Modeler, it can be enhanced with BPMN attributes that can’t be represented in the table-driven definition, such as events and subprocesses.

There were a few other things, such as enhanced process definition and instance management functions, including the ability to suspend a process definition (and optionally, all instances based on that definition) either immediately or at a scheduled time in the future; some end-user reporting with configurable parameters; and integration of an SMS notification functionality that sent me a text telling me that my order for 2 iPads was shipped. Sadly, the iPads never arrived.

We finished with a brief description of their roadmap for the future:

It’s great to see Activiti continue to innovate after so much change (losing both the original product architect and their main partner) within a short period of time; it certainly speaks to their resiliency as an organization, as you would expect from a robust open source project.

I also talked with Scott Francis of BP3 about their new Activiti partnership; apparently the agreement was unrelated to the camunda departure, but definitely well-timed. I was curious about their decision to take on another BPM product, given their deep relationship with IBM (and formerly with Lombardi), but they see IBM BPM and Activiti as appealing to different markets due to organizational cultural choices. Certainly to begin with, most of their new Activiti customers will be existing Activiti customers looking for an enterprise support partner, just as many of their new IBM BPM customers are already IBM BPM customers; however, I’ve been in a couple of consulting engagements recently where organizations had both commercial and open source solutions under evaluation, so I’m anticipating a bit of channel conflict here. BP3 has no existing Activiti customers (or any other BPM other than IBM), and has no significant open source contribution experience, but plans to contribute to the Activiti open source community, possibly with hybrid/HTML mobile front-ends, REST APIs architecture and other areas where they have some expertise from building add-ons to IBM BPM. Interestingly, they do not plan to build/certify WAS support for Activiti; although they didn’t see this as a big market, I’m wondering whether this also just cuts a bit too close to the IBM relationship.

Aside from the obvious potential for awkwardness in their IBM relationship, I see a couple of challenges for BP3: first, getting the people with the right skills to work on the Activiti projects. Since the IBM BPM skills are pretty hard to come by, they won’t be redeploying those people, so presumably have to train up other team members or make some new hires. The other challenge is around production support, which is not something that BP3 does a lot of now: typically, IBM would be the main production support for any IBM BPM installation even if BP3 was involved, although BP3 would support their own custom code and may act as triage for IBM’s support. With Activiti, they will have to decide whether they will offer full production support (and if not them, then who?) or just provide developer support during business hours.

One response to “Activiti Update 2013: New Functionality And New Partners”