These days it’s largely expected that the latest consumer technology will be adopted in a new record setting time.  This was true of social media as it was of earlier communication revolutions. Yet the contrast between the widepsread use of social networks in people’s personal lives and the same phenomenon by the enterprise is often stark.

Much has been made recently of the liklihood of first couple of generations of internal social networking efforts to fall by the wayside, with Gartner recently noting that up to 80% of them won’t survive. Fortunately, this isn’t exactly unusual for a major enterprise-wide initiative that ushers in major change: Well over ten years after they were introduced, ERP projects are still reporting substantial failure rates, with 60% of them creating less than half the expected benefits, according to the latest data from my ZDNet colleague Michael Krigsman.

With outcomes like this, there’s no question that social business (defined here as the application of social media to the enterprise) is currently in the trough of disillusionment, even as more companies report success with the methods than ever before. In fact, nearly two-thirds of companies currently use social media to engage with customers and 49 percent to advertise, according to Stanford’s 2012 Social Media Survey. What’s more, internal social networks are on target to be key elements of the workplace experience in most enterprises by 2016.

So what gives here? Is social business a success now, or will it be successful in the near future, or will it all move on to a new revolution? These are the crucial questions that IT and business leaders would reasonably like to know before they commit their budgets, people, time, and reputation on what is by many accounts the future of digital engagement. 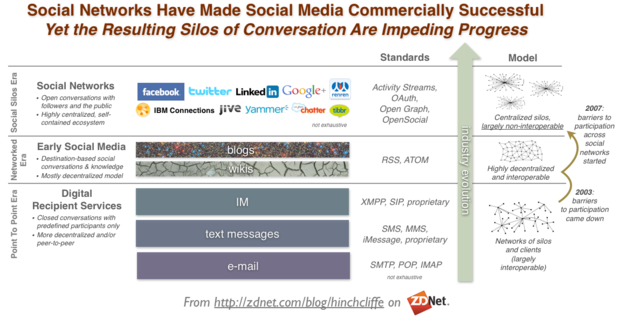 Unfortunately, like so many things in today’s world, the answer is somewhat nuanced. To fully understand where we are, we need take a very brief tour of online history.

We’ve gone through at least three significant, large-scale revolutions in the communications landscape in the last 20 years:

The first was the arrival of global e-mail on a single network (the Internet), the first time that anyone who was connected online could send a message to literally anyone else, at least if you had their e-mail address. Instant messaging, texting, and other point-to-point technologies — also requiring that you unambiguously identify the target of your messages up front — soon joined in as well. Communcation was now global and largely frictionless, but it was also closed to discovery and new participants. Their conversations also didn’t scale well.

The second big revolution was the initial foray into early forms of social media, such as blogs and wikis. These had several unique attributes: They were asynchronous and much more scalable than e-mail/texting/iM, and you didn’t have to identify your audience beforehand. Anyone could communicate with everyone automatically, provided they had information that people wanted to know about (not coincidentally open participation is the root principle of social business.) Blogs and wikis were adopted broadly, but not as widely as e-mail at first. Interestingly, blogs were hosted as individual Web sites, and connected via syndication protocols like RSS. Perhaps most significantly in hindsight, syndication allowed these decenralized conversations to be found and linked together, no matter what social media platform or service they used underneath. The key point here: Virtually all blogs played nice and were interoperable with the blogosphere.

The third revolution was arrival of commercial social networks like MySpace, LinkedIn, Facebook, Twitter, and many others in the consumer world and the recent maturity of corporate social networks like IBM Connections, Jive, Yammer, Chatter, Tibbr, and numerous others. These all offered up social profiles with lists of personal connections and provided bustling activity streams that made the social experience 1) seamless to use and centralized in one place, 2) largely conversation and content-oriented, and 3) organized around one’s connections/followers.

However, with the arrival of commercial services, came the return of the dreaded walled garden from the early Internet era. Social networks were in vigorous competition for members, and interoperability was often considered a great way to create an exit ramp of traffic. As a result — and probably to our considerable detriment — interoperability between virtually all popular social networks is quite limited today, being fraught with commercial, political, and technological issues.  On the other hand, because of their reach, utility, ease-of-use, and intrinsically higher network effect, these social networking services also became enormously successful and are now more popular than e-mail or any other form of online activity.

In retrospect, it’s clear that the cultural divide between traditional business methods and social media was wider than virtually everyone anticipated at first. Nevertheless, the world population has recently gone through a great upheaval in terms of its communication behaviors and inclinations. We are far more digital, social, and mobile in general in our personal lives and the workplace than even just three years ago.

However, we see a growing body of evidence that now confirm what I predicted in my 2013 predictions for enterprise social media:

Social fragmentation and silos will vex social media strategists more than ever before.

Recent studies by McKinsey & Company (see chart on how fully networked organization outperform), the Social Business Council, and seemingly disconnected data points such as Facebook becoming the top enterprise collaboration tool by worker preference, all appear to point to the same thing:

Only when the barriers between our social silos are torn down will we realize the full potential of social business.

We’ve managed to erect countless partitions — much more than we could ever need to protect privacy or corporate information — between all the social tools we’ve put in place or acquired through departmental projects and consumerization. These days, I continue to speak with organizations that find themselves surrounded by social media. They find they are employing a vast panorama of socia media, including microblogs, internal social networks, customer communities, social CRM initiatives, Twitter/Facebook accounts, social marketing experiences, LinkedIn groups, SharePoint sites, rogue wikis, and much more, all of which cannot talk to each other, or easily find/use/share each other’s content. (Yes, there are a few bridges between some of these channels, but they are inadequate and poorly adopted.) This regularly breaks business processes, creating analysis paralysis (which tools/channel for the job?), and more.

While e-mail is an antiquated technology that has hardly improved in 20 years and creates closed conversation, it has — like the Web itself — one signature advantage: It’s part of a single, flat system. Thus, our parochial patchwork of social silos is starting to impact useful communication and hold back effective engagement in the same way older network technologies do.

It’s clear that to get to the next level of performance, we’re going to have to address this situation. Respected organizations like the Open Group certainly recognize the problem. And the scale of the issue will just as certainly require bold action in order to work.

How will this happen then? I’ve gone on record that it may be the adoption of effective open standards that returns social networks to fundamental interoperabilty. But will commercial services adopt them? Their executives and shareholders are likely not to agree.  Are there other solutions? Possibly. Either way, if social media is to progress to the plateau of productivity, we must figure this out.

I’ll be exploring this topic in more detail in the near future. I welcome your comments below on how we can resolve this as an industry.