The folks at MailChimp recently did an article that analyzed open rates for emails and how they were affected by Google’s new Gmail tabbed user interface.  There’s not a huge amount of data yet, but there are 3 consecutive weeks of reduced open rates in the wake of the new tabbed interface.  Here’s the graph from the MailChimp article: 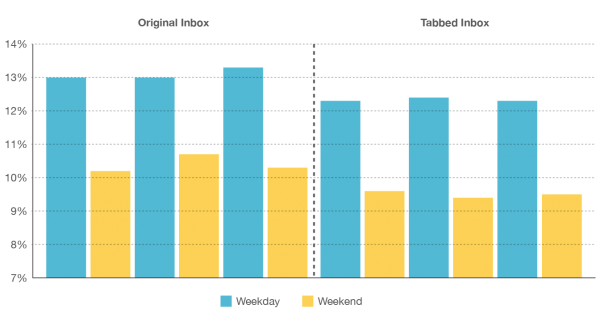 This is not particularly surprising.  Personally, I don’t find the tabbed interface useful at all–it just means I have to look in more places to finish reading through my inbox.  If I do run short of time, it is the promotions tab that suffers.  The MailChimp folks say that it is very hard to write email that doesn’t get stuffed into the promotions tab too.  What a pity Google didn’t put Google Reader on a tab instead of Promotions and Social.  It wouldn’t been a lot more useful, but that’s beating a dead horse.

Marketers are going to be disappointed by this development because email remains one of the most powerful weapons in there arsenal.  Unfortunately, here is a newsflash:

It’s in Google’s best interest to kill or damage any marketing channels they don’t own.

They don’t really help in any way with email marketing, so anything they can do to reduce its efficacy means you’re that much more likely to shift dollars to areas they do own.  They get nothing when your successful SEO leads to lots of results through good organic search results so they’re only to happy to limit the information you can get about how people found your site and thereby make your SEO that much less effective.  In fact, they’ve basically declared all out war on SEO’s.  They are the enemy because they reduce your need to spend ad dollars with Google.

Expect more of this as time goes on.  Big companies can’t resist using their clout to do this kind of Evil.  In the original PC days, the Evil was perpetrated by controlling shelf space.  If you owned all the shelf space, nobody would ever see the Little Guy’s innovative new products.  In today’s world, they want your eyeballs focused entirely on parts of the Internet that contain their ads.  As their growth and profitability slow down, they’re only going to play these kinds of games more often to try to prop things up.