While most companies weren’t looking, social business remade the economy

The evidence has been steadily seeping into the edges of business thinking for years: The online world has clearly and systematically changed the rules of business, and companies must adapt or risk irrelevance. This often seemed self-evident to many of us, even if the ranks of the Fortune 500 and Global 2000 didn’t actually seem to change very much as a result. But the times, they have recently changed.

It wasn’t until rather recently that a broad swath traditional businesses started to be challenged at their very core by the realities of social business, a set of relatively new concepts that are both embodied by and taken from social media that seemed to imply great changes in the way we work, think, and live.

Admittedly, old media and software — to hold up two industries almost instantly impacted by the global Internet — were particularly disrupted early on, by social media and open source respectively, in such a profound way that they no longer look nearly anything like they once did. In sharp contrast to these two examples, most other industries just didn’t witness anywhere near the same dramatic threat to their own business models for well over a decade.

However, that now finally seems to be changing. The next-generation digital business seems to have arrived in scale. With the advent of a potent new generation of high-velocity online startups aimed much more deliberately at reformulating the basis of what many types of traditional businesses do, the revolution originally entailed by social business does appear to be happening, but not quite as envisioned. 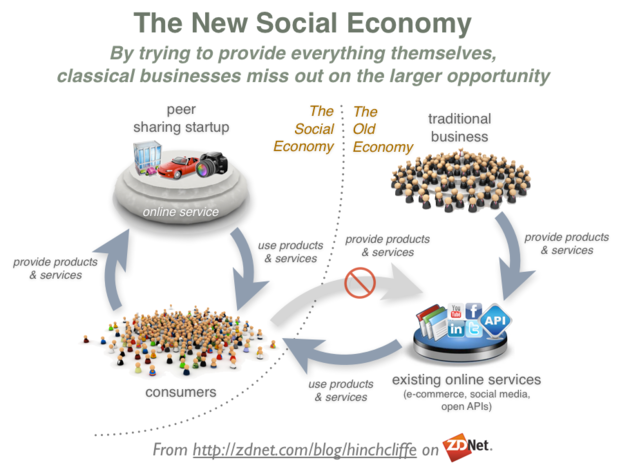 While it was originally believed that existing market leaders could simply convert their own leadership position in the old economy into a similar one in the new digital economy, it increasingly looks like it will instead be led by digital upstarts that are now pushing the boundaries of just about every traditional type of industry and market niche. And fortunately or unfortunately, depending on who you ask, very few classical enterprises seem to be involved this revolution.

How exactly is this happening and where? One of the most complete conceptions of how this is currently taking place was recently synthesized by well-known Altimeter analyst Jeremiah Owyang, who has dubbed this next new digital/social revolution the ‘Collaborative Economy.’

The basic idea of the Collaborative Economy, like so many major shifts, is actually pretty simple: The world has started moving beyond the simple mass sharing of ideas and media over the Internet. Instead, we have now begun sharing products and services directly with each other en masse using the same social media principles. Owyang beleives, and early evidence is starting to support, that this will be much more disruptive that the first wave of social media was.

In his new report, Corporations Must Join the Collaborative Economy, he notes:

Social technologies radically disrupted communications, marketing, and customer care. With these same technologies, customers now buy products once and share them with each other. Beyond business functions, the Collaborative Economy impacts core business models.

He goes on to observe that traditional enterprises don’t have to stand idly by and wait for startups to empower the marketplace to meet its own needs:

Companies risk becoming disintermediated by customers who connect with each other. The Collaborative Economy Value Chain illustrates how companies can rethink their business models [DH: my emphasis] by becoming a Company-as-a-Service, Motivating a Marketplace, or Providing a Platform

A typical example of a high impact Collaborative Economy startup is Airbnb, the well-known site where anyone can rent out spare rooms or empty houses for anyone else to use, without the need for an intermediary business that provides the physical facilities. As a clear shot across the bow of the hospitality industry, Airbnb will provide on a peak day placements for up to 200,000 people per night. In comparison, the global hotel megachain Hilton has only 600,000 rooms as noted Thomas L. Friedmen in a recent column about this phenomenon. Thus the size of some of these new startups is now starting to challenge traditional market leaders, often bending or breaking local laws, customs, and regulations along the way, which were never designed for the social business era.

Other examples abound in many industries including transporation (Uber, Lyft), finance (LendingClub), workforce (oDesk), dining (Feastly), corporate real estate (LiquidSpace ,ShareDesk), shopping (Yerdle), venture capital (Kickstarter), and countless others, of which these are just a tiny but representative sample.

The real point is that in-the-large it appears to be a broad demographic digital business trend. Owyang’s research pegs the current value of the Collaborative Economy at $26 billion today, with other data showing it growing overall at a 25% year-of-year rate. Plotted forward five or ten years, and it is evident that the Collaborative Economy will become a major portion of the world economy sooner or later, and very probably the former.

Part of the reason that the timing appears to be right for these big ideas is that in a consumption-based society we individually now posses so much in terms of usable resources, and it is also frequently quite underutilized. The sharing economy reaches directly into this vast and largely untapped stored value that consumers now control by helping them make much better use of what they have.

The implications of all this in terms of efficiency, reuse, environmental impact, productivity, value creation, and other important economic, social, and civic factors are potentially enormous. The corollary, however, may be that there is much less room in the economy for traditional businesses which tend to be much less resource-rich, innovative, or cost effective. In short, they may simply not compete strongly in the collaborative economy, because of a much more labor and resource-intensive legacy approach to meeting market needs.

Much has been made over the extremely rapid change in today’s technological landscape, and how slowly companies are adapting to it. For example, well-known data shows that the average lifespan of an S&P 500 company has plummeted from 75 years in 1937 to just 15 years today, and has continued to drop steadily. Part of this is an indictment of how poorly companies have been absorbing new technology in a way that is fundamentally useful to the future of their business. The other is the obstacles to change are the sheer residual value of following the dying path they are on. In other words, the Innovator’s Dilemma for the digital era.

As John Hagel and John Seely Brown were recently quoted in the Wall Street Journal, there are two overarching trends that are pressuring businesses in the digital age where location doesn’t matter and market share is a relentlessly zero sum game of who has the biggest ecosystem:

There are two dominant narratives about the institutional changes we are experiencing and neither one of them gives anyone much respite: The first is that companies will fragment to smaller and smaller entities and even down to individual providers; the second is a winner take all world where only the largest survive. We believe that both of these narratives are too simplistic. We see a world where both of these narratives co-exist and are mutually reinforcing rather than conflicting. Scale and fragmentation interact in a symbiotic relationship where the growth of each is what drives the growth of the other.

What are corporations to do in response?

While the track record of companies in making the transition to the world of social business has been a checkered one, I’ve long identified incremental success stories here. In speaking with Owyang about the emergence and threat of the Collaborative Economy to the industrial age generation of companies, I have challenged him on what the prescription is to successfully transform. Unfortunately, though he too believes it can be done by some, but not by all, the road ahead is as varied as the company and industry. But looking at the few success stories there are (and there are some), these key points stand out as the corporate mindset needed to transition successfully to social business:

Naturally, this is just a high-level set of factors for changing with the economic times. The reality will likely be grittier, more challenging, and surprising to the typical classical industrial age business.

Yet, the greater the changes taking place in the marketplace, then the greater the opportunity. The message here is that it’s probably later for your industry than you think. Most businesses will have to learn innovative and effective ways to adapt to the Collaborative Economy in order to survive and thrive, even in the medium term. Fom a customer and corporate perspective both, that may not at all be a bad thing.