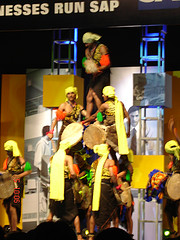 We had a blogger roundtable today with Soeren Balko, VP in the SAP NetWeaver BPM architecture and design group, and Marek Kowalkiewicz from the Brisbane section of SAP Research with an overview of the research and special projects going on at SAP. Innovations tend to emerge from the research centers – in conjunction with the universities with whom they collaborate and customers – then the product development groups become involved in order to determine how to productize the ideas.

There are bots that can be added to processes in order to check the process integrity, export process models, and to detect portions of the process flow that could potentially be collapsed into a subprocess. It makes sense that there will be other bots created in order to perform other automated checks and actions on the process model.

They’re not supporting the full BPMN 2.0 object set, but have a subset that can at least be used for simple models and as a proof of concept around the idea of a modeler within Wave.

James Taylor was at the table too, and we got into a discussion of modeling rules in a similar manner: although this is a BPMN modeler, so there’s no opportunity to model rules here, there may be an opportunity to take the NetWeaver BRM rules modeling paradigm and create a similar sort of prototype that allows for rules modeling within Wave.

We’ll be seeing more of Gravity tonight at the Process Design Slam, and if I ever get my freaking Wave account (2 invitations already on their way, but not arrived yet), then I can actually try it out for myself.

We also had a brief overview of Yowie, a project that we saw at DemoJam last night, that uses SAP text analytics to act as an intelligent agent either as a bot in Wave or when receiving emails regarding enterprise applications and assets; and BirdsEye, which receives the GPS signal sent from an iPhone (or any geopositioning RSS feed) to do near-real-time positional tracking for applications such as delivery optimization.