The Global Information Industry of the UCSD has put together statistics about how much information gets consumed by Americans every day. Two previous studies, by Peter Lyman and Hal Varian in 2000 and 2003, analyzed the quantity of original content created, rather than what was consumed. A more recent study measured consumption, but estimated that only .3 zettabytes were consumed worldwide in 2007. 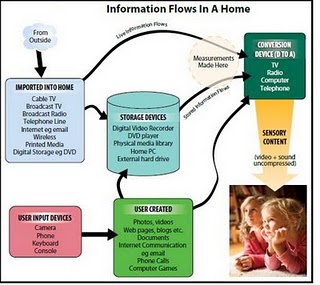 In 2008, Americans consumed information for about 1.3 trillion hours, an average of almost 12 hours per day. Consumption totaled 3.6 zettabytes and 10,845 trillion words, corresponding to 100,500 words and 34 gigabytes for an average person on an average day. A zettabyte is 10 to the 21st power bytes, a million million gigabytes. Hours of information consumption grew at 2.6 percent per year from 1980 to 2008, due to a combination of population growth and increasing hours per capita, from 7.4 to 11.8. More surprising is that information consumption in bytes increased at only 5.4 percent per year. Yet the capacity to process data has been driven by Moore’s Law, rising at least 30 percent per year. One reason for the slow growth in bytes is that color TV changed little over that period. High-definition TV is increasing the number of bytes in TV programs, but slowly. Additional stats to note:
The traditional media of radio and TV still dominate our consumption per day, with a total of 60 percent of the hours. In total, more than three-quarters of U.S. households’ information time is spent with non-computer sources. Despite this, computers have had major effects on some aspects of information consumption. In the past, information consumption was overwhelmingly passive, with telephone being the only interactive medium. Thanks to computers, a full third of words and more than half of bytes are now received interactively. Reading, which was in decline due to the growth of television, tripled from 1980 to 2008, because it is the overwhelmingly preferred way to receive words on the Internet.
a. The average person spends 2 hours a day on the computer
b. 100,000 words are read each day.
Clearly, in this world, there is just too much of information. Notwithstanding the normal channels such as email, friends to stay in touch with, meetings to attend to, research papers that one needs to stay on top of, books to read, Tivo recordings and so forth. With Social media, RSS feeds, one could have literally hundreds of posts each day from highly selective sources coming through feed aggregators. To make matters worse, people are now finding ways to take non-textual informational sources such as audio files (e.g. podcasting) and even video files and tying that to RSS. A large fraction of the people one interacts with are walking around with their eyes glazed, seemingly on auto-pilot, speaking a mile a minute about this blog they read, this documentary they Tivo’d, this video they saw on the Net, this new startup company that’s hot. 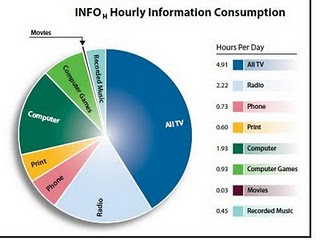 The Rise of Interaction : Most sources of information in the past were consumed passively. Listening to music on the radio, for example, does not require any interaction beyond selecting a channel, nor any attention thereafter. Telephone calls were the only interactive form of information, and they are only 5 percent of words and a negligible fraction of bytes. However, the arrival of home computers has dramatically changed this as computer games are highly interactive. Most home computer programs (such as writing or working with user generated content) are as well. Arguably, web use is also highly interactive, with multiple decisions each minute about what to click on next. 1/3rd of information is today received interactively.. This is an overwhelming transformation, and it is not surprising if it causes some cognitive changes. These changes may not all be good, but they will be widespread.

One response to “How Much Information & Overload Phenomenon!”