Database Billboards: Times and Cars and Oracle Competitors Gone By

SAP HANA Billboard on US Highway 101 Near Oracle Headquarters

Driving up or down 101 these days, you can’t avoid the new SiliconView billboard – it’s a double-sided electronic billboard, so you can see it whether you are going north- or south-bound, and most of us on 101 are driving slowly enough that we get to see several iterations of the billboard content as we sit in traffic.

A few weeks ago, the billboard started displaying ads with that distinctive SAP orange/amber/mustard/whatever color, drawing my eye to something that normally just existed in the background.  Yes – it was an SAP ad!  That’s odd, I thought – very few business decision makers for large SAP-style prospects drive up and down 101.  Wouldn’t it be better to put something up in San Francisco airport, like Oracle does, or in San Francisco?

Then I realized – this billboard was advertising SAP HANA. Could it be?  Could SAP be making the same silly mistake made by so many other database competitors over the years – wasting money on ads meant to get in Oracle’s face just a couple of miles away on the road most Oracle employees (including Larry Ellison) take to get into and out of Oracle HQ?  Could SAP be falling into the same trap sprung on IBM, Ingres, and Informix?

Yes, it appeared that SAP was getting into the chest-thumping, one-upsmanship game played by Oracle’s database competitors so wastefully in the past.  Those companies started focusing on Oracle, rather than on Oracle’s customers’ needs.  It was more important to Informix to try to tweak Larry’s buttons than it was for them to properly account for their software in the channel, or to do a better job meeting customers’ needs.

As I was thinking about writing this blog, I looked for images of those older billboards.  If you have any images (especially IBM or Ingres billboards), please post a link in the comments below.  I was able to find online only Informix billboards. 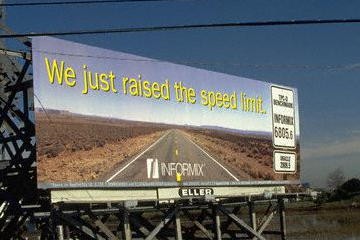 That last billboard was the one Informix displayed as the company was in tatters, falling apart from its latest scandal.  After that, no more billboards (from Informix).

SAP HANA is a product that has a great deal of potential, as I and other Enterprise Irregulars have written in the past.  However, in conversations with SAP HANA customers and experts, there are still significant issues to be overcome before this becomes a worthy competitor to Oracle – issues in cost, stability, scalability, standards support, openness to a third party ecosystem, availability of complementary solutions, and availability of reasonably priced expert resources.  Hopefully, SAP is focusing its R&D investments on this issues, and on being a platform for a new kind and new generation of in-memory applications rather than the RDBMS-focused applications of the 1990’s, even while SAP marketing participates in what is perhaps just harmless competition and good-natured rivalry.

However, I hope SAP will remember that Highway 101 is littered with the burned out wreckage of SAP HANA’s predecessors who took Oracle on directly in the marketing arena, rather than delivering more value to customers.  In fact, SAP even owns one of those defunct database companies itself …

3 responses to “Database Billboards: Times and Cars and Oracle Competitors Gone By”