On Labor Day: A note about robots and jobs

By Vinnie Mirchandani on September 2, 2013 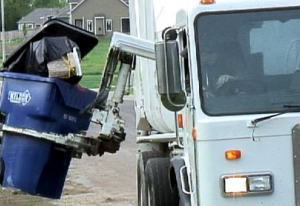 Hillsborough County, where we live, is about to introduce an automated garbage collection process. Households are being issued new roll carts with RFID chips to monitor if any were missed on collection routes. Trucks with robotic arms will lift and empty these carts. The operator will maneuver the arm aided by cameras and other technology.

In the “town hall” meetings about the new process, there are plenty of questions. Many, you can sense, are about the two person route now being done by one person. Yet another victim of growing automation is the worried tone. Whether it is professors at MIT, or this week’s Time article on “The New Robot Economy” , you get the sense of growing panic about robots killing jobs everywhere. The robots from Elysium are already here 140 years early.

In reality, the current generation robots are becoming smaller, less noisy and don’t need to be caged off. They are becoming assistive to human workers. Daimler (the Mercedes company) is using lightweight KUKA robots to work alongside workers. Amazon’s Kiva robots are R2D2 sized and zip around warehouses bringing items for a human to check and pack. The Dutch company, Lely offers a milking robot to assist dairy farmers.  In Japan, they are providing elderly care.

Could many of these robotic tasks be done by humans? Of course, but let’s continue with our county example. The job being eliminated is the dangerous one where the person literally hangs on at the back of the truck. It is a high turnover job, even in times of high unemployment.

People also forget what may hurt us as laborers often helps us as consumers. And even the so called heartless businesses and governments which are introducing robots are not oblivious to the fact that we are consumers and taxpayers.

Take the example of cars. Most everyone seems excited about the Google autonomous, driverless car. Talk to most auto makers, however, and they are in no hurry to replace the human driver. If anything they are using technology to make cars more fun and safe for humans to drive.  That includes radar which is helping drivers with assistive cruise control, sonar with parking, cameras with rear view and blind spot vision, sensors with low tire pressure, lasers and proximity sensors with gestures to raise rear tailgates, eye tracking with reduction of knobs and buttons in the cabin, Bluetooth and other audio technology to answer calls and to play music.

Same thing with governments. Till they can figure out how to replace speeding fines that could go down with driverless cars and what to do about highway lanes and traffic lights in a world where some cars are driverless and others are not, they are in no hurry to usher in autonomous cars.

That’s true of most automation. I particularly like the example of aviation. In the 40s, some of the commercial planes had four pilots, three flight engineers and two radio operators. That has shrunk to today’s cockpit of 2. But look at the massive explosion in aviation on a global basis and all kinds of cockpit, cabin, ground jobs that has created. And as international flights extend nonstop coverage, it is common to have 2 relief pilots on each flight.

There’s usually a complex, but invisible, process of balancing the interests of businesses and governments and unions and consumers. Over the centuries, that equilibrium has helped mankind progress forward.

So, on Labor Day, I say let’s fret less and be more optimistic about the usually positive, long-term impact of most automation