The Elaborate People Side of Baseball 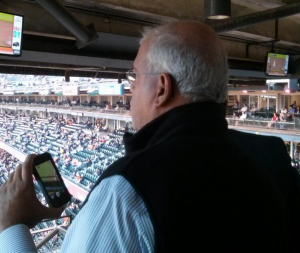 Every September, as MLB teams overnight expand their 25 player rosters to 40, I think about the iceberg of talent that most of us do not see on the field or in the dugout.

I got a glimpse of that as Leilani Gayles, Chief People Officer at the San Francisco Giants, joined us at a game at which Workday hosted analysts. Not an ideal setting to conduct a full conversation but got several nuggets.   Workday is used to track different compensation and benefits plans that are unique to various player contracts. Scouts use various iPad based tools to track a whole set of metrics – baseball’s version of “recruiting”. The GM’s office does the Moneyball style player and other analytics.

Leilani also told us about some morale building stuff unique to baseball. She showed off her 2010 World Series ring . She described how the Giants flew staff to be part of away World Series games. Both are small investments but make non-players so much more proud of their teams.

A few weeks ago, I got another glimpse into baseball people management when I heard Billy Beane, GM of the Oakland A’s talk about how much more analytically rigorous baseball has become. That is especially in smaller city teams who cannot afford the payroll of the Yankees. He was also proud of the Ivy League talent he and other teams have been able to attract into their front offices.  Leilani is another example of the richer talent moving into MLB – she came to the Giants from previous jobs at HP, Silicon Graphics and other tech companies.

I asked Leilani if I could come back and spend some more time talking about the technology at the Giants. The CIO, Bill Schlough had given me a nice tour of the technology at AT&T Park 6 years ago. Time to update that with all the tech the  Giants are pioneering – in secondary ticket markets, with its Social Media café, in their growing cloud apps (Workday, Salesforce.com) portfolio and so many other areas.