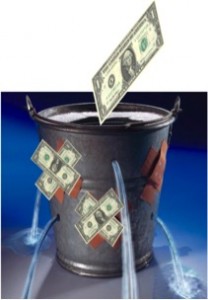 I love cloud computing. I love metrics. And I love renewals. So when I went looking on the Web for a great discussion of SaaS renewals and metrics I was surprised not to find much. Certainly, I found the two classics on SaaS metrics:

The Four Factors
While the above articles are all great, I was surprised that no one really dug into the nitty-gritty of renewals at an enterprise SaaS company, where I believe there are four independent factors at work:

Particularly in a world where companies are increasingly marketing “negative churn” rates and/or renewal rates in excess of 120% (without much definition in the process), I think it’s worth digging into this.

A Simple Example
Let’s take a concrete example. Imagine a customer who buys 100 seats of product A at $1,200/seat/year on 7/30/12, with a contractual provision that says the price cannot increase by more than 3% per year.

Hang on. While I know you want to run away right now, don’t. This is all real-life stuff in a SaaS company. Bear with me, and download the spreadsheet here (as an Excel file, not a PDF) that shows the supporting math.

A few questions are easy:

Calculating Churn: Leaky Bucket Analysis
So far, so good. Now let’s talk about churn. Because, as you will see, renewal rates alone are complicated enough, I have adopted a convention where:

I know this is a completely arbitrary decision, but doing this lets me remember one set of formulas instead of two, reduces rat-hole conversations about definitions, and — most importantly – lets me look at one area in percentages and the other in dollars, helping me to avoid the “percent trap” where you can lose all perspective of absolute scale. [3]

I define churn with an equation that I call “leaky bucket analysis.” [4]

Note that ARR, seats, and customers are all snapshot (or, point-in-time) metrics that lend themselves to leaky bucket analysis. Period-metrics, like bookings, do not. Bookings happen within a period. There is no concept of starting bookings + new bookings – churn bookings = ending bookings. That’s not how it works. So, when you define churn through leaky bucket analysis, measuring bookings churn doesn’t work.

But from a customer value perspective it does not. Unless the customer has plans to discontinue using the service, by dropping from a three-year to a one-year contract we will actually collect more money from them over the next 3 years if they continue to renew ($438,000 vs. $372,300) [7]. So the bookings churn that looks bad for year-one cash actually results in superior ARR and three-year cash collections.

The lesson here is that different metrics are suited for measuring different things. In this case, we can see that bookings churn is useful primarily for analyzing short-term cash collections and not, say, for customer lifetime value or customer satisfaction.

Renewal Rates and Timing
Now that we’re warmed up let’s have some fun. Let’s answer some questions on renewals:

Here it’s going to get a little dicey.

On an ARR basis, how do we measure this renewal? Answer: this begs the question of whether we should include expansion ARR due to new seats, new products, and price increases. Since I am worried that expansion may hide shrinkage, I want to see this both ways. Hence, I will define “gross” to mean including expansion and “net” to mean excluding expansion.

I’d say the answer depends on what you want to measure. Having nearly drowned you in the renewal-rate swamp, let me now drain it. Here are the metrics that I think matter most: 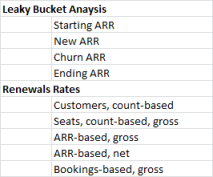 Footnotes
[1] Note that in a multi-year prepaid contract that bookings (order value) equals total contract value (TCV). When multi-year contracts are not prepaid, bookings are only the first-year portion of TCV.

[2] The renewal order is for three years, so to calculate the ARR we need to divide the bookings value by three.

[3] Saying our “churn rate was 10%” makes things sound OK, but saying we churned $2M in ARR is, to me, somehow more visceral. That is, we had to sell an extra $2M in ARR just to make up for existing business that we lost.

[4] A leaky bucket starts at one water level, during a period new water is added, some water leaks out, and the net change establish the ending water level. (Note that in leaky bucket analysis, definitionally, leaks are never negative.)

[5] Now might be a good time to download the spreadsheet accompanying this post so you can see my calculations. In this case, the churn is the difference between the total value from product A on the original order versus the renewals order.

[7] In reality, we should both uplift the price in years 2 and 3 and discount by the renewal rate to get a better expected cash collections figure. (There is nearly endless detail in analyzing this subject but I will make simplifying assumptions at times.)

[9] Bonus question:  how would you handle the late-renewal scenario at the 7/20/13 board meeting? Answer: I would publish provisional renewal rates that exclude the transaction, letting the board know we have an outstanding renewal in process. Then once it closed, I would revise the 3Q renewal rates accordingly.

[10] Which then begs the question of how you count customers. For example, while GE has one logo, they have numerous very independent divisions in a large number of countries.

[11] Note that purist might argue that since we had the right to raise prices up to 3% that we should put 103% of the ARR in denominator in this and all similar calculations, thus dropping the resulting renewal rate here to 100%.  While I believe annual increases are important, I still believe renewing someone to 103K in ARR who was at 100K in ARR is a 103% renewal.  Tab 3 of the supporting spreadsheet plays with some numbers in this regard.

[12] It is a good idea to divide churn into 3 buckets to describe the reason: owner change (including bankruptcy), leadership change, and customer dissatisfaction.

One response to “Measuring SaaS (or Cloud) Renewal Rates: Way More Than Meets the Eye”