SAP: Out with the Old, Shrugging Off The Tag 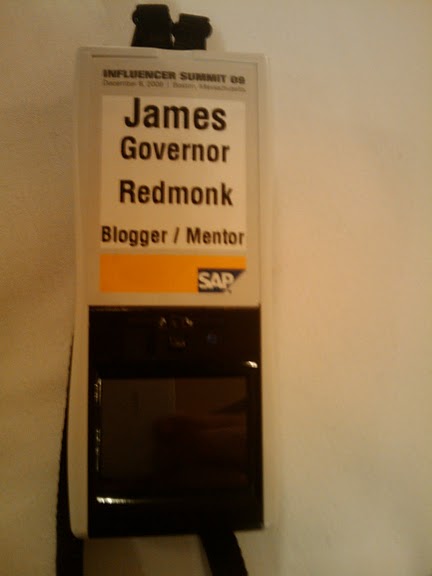 I just got back SAP’s Influencer Summit for 2009 in Boston. The company seem to be finally emerging from what can only be described as an annus horribilis. 2009 was not a good year for SAP. Sales are down, perceptions are more negative than they have been in a long time because of potential maintenance fee hikes, and Cloud looks like a weak spot because the firm still hasn’t driven any volume through its Business ByDesign platform.

To be fair to new CEO Leo Apotheker he was dealt a pretty tough hand – who wants to take the reins just as the world economy goes into meltdown? That said a more consultative, less confrontational approach to discussions about the maintenance changes could have paid dividends. So what’s been happening?

SAP has been reengineering its operations and focus after the Business Objects acquisition, with the rise and rise of the a free-wheeling culture of information integration and analytics. The most obvious signs of change are new company leaders – at board and VP level.

Things have taken longer to shake out than I expected when I wrote “There’ll Be More Change at SAP in the Next 6 Months Than The Previous 30 Years”. But shake out they have.

SAP wants to get into situational, unstructured apps that cross boundaries but it will need a new mindset to get there. The company doesn’t currently think in terms that allow for uncertainty- every process must be tightly bound. But managing knowledge is an inexact science.

Marge Breya is now executive VP and general manager, Intelligence Platform and SAP NetWeaver Group. Think about it. A non German woman is running Netweaver. I love the fact she does all her down demos. No need for Ian Kimbell. Here is a video interview:

Another executive that has been repeatedly promoted in a very short space of time is Jonathan Becher, now EVP of Marketing. Jonathan is a very different animal from your normal Walldorf marketer. I should point out that I consider him a friend, as well as a client, if I am to say good things about him. I mean how many analytics marketers do you know that would argue against collecting more data.

We have descended into measurement madness using the motto “you cannot manage what you cannot measure”. Our obsession with metrics means we’ve lost sight of business outcomes. “Not everything that counts can be counted and not everything that can be counted counts”. Perhaps organizations would be better served to focus on what they are trying to achieve than to just keep score.

Not your granny’s SAP then. So what is the lanyard thing in the photo? Its a weird device called an nTag for conferences. It can be used for spot polls during sessions, or to track which sessions are attended, or to swap contact details. What made me chuckle though was that SAP chose not to enable the nTag web site for data sharing due to privacy concerns. The device seems like a great metaphor for the old SAP. Proprietary, heavyweight (seriously, the thing weighs a ton), a data roach motel. Some potential for innovation but too much of a closed network to really do the business. Vinnie likes to think he has a nose for innovation, but the nTag is not it.

Build a web app next time, chaps. Use PhoneGap (client) so you can write an app that runs on Blackberry, iPhone or Android. Lets take the millstone off our necks and start innovating.

I am on the record as saying SAP Business ByDesign, the company’s SaaS suite for medium-sized businesses is going to be a huge success, a somewhat contrarian position.  Three pieces of news from the Summit confirmed my thinking

Everything is in play. We’re likely to see a new Information Worker brand, and product set. Netweaver is now just plumbing. A means to an end.

Meanwhile John Wookie, ex-Oracle, is running SAP’s On Demand offerings play. He is not focusing on plumbing, but business apps.  SAP made some big claims for this business, so I need to drill into the customer base, but the new blood has brought a lot of confidence to SAP’s play here. And what a wasted opportunity by IBM- I always felt On Demand was a brilliant play. I mean do business people want to hear about “Cloud” or On Demand? I think the latter.

I am not saying the 2010 is going to be a bumper year for SAP, but it at least feels like some hygiene factors are being worked out, and there are some cool new products to sell if SAP can work out the business model.

There is more to say based on the summit, but for now, that’s a wrap.

SAP is a client, and paid T&E for the event. Microsoft is also a client, as is PhoneGap.

2 responses to “SAP: Out with the Old, Shrugging Off The Tag”