I felt a great disturbance in the Force.. 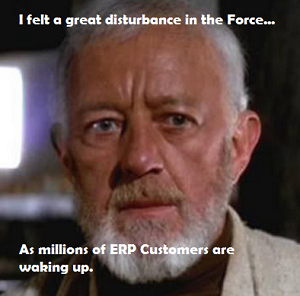 We have watched for years as cloud companies target on-premise systems – so Salesforce going after Siebel, Workday after PeopleSoft, Amazon after IBM etc.

At the Microsoft Analyst Event yesterday I heard in reverse of back to on-premise examples especially in the banking sector as global regulatory concerns grow around public clouds. Then there are cloud to cloud moves – NetSuite announced a SAP BYD sunset program. Infor has been targeting on- premise to on-premise moves with better vertical functionality and TCO. There is churn everywhere.

Same with the services arena. Two SIs described their plans during the Microsoft event. One a global SI with a major SAP practice would not have been caught anywhere near a Microsoft project a couple of years ago. A national firm described how they are adjusting to life with Microsoft itself going direct to customers. Microsoft described a new set of cloud services firms which have grown with the Office  365 rollout. They described the growing focus on digital agencies as Microsoft finds itself in a unique position of bundling access to its marketing applications and its numerous media properties. At the same time, resellers from the Great Plains era with core accounting/ERP skillsets continue to be an important channel.

And yet, as I told some of the Microsoft execs yesterday, customers are building their own or buying from boutiques strategic technologies  to make their products and services smarter. So, auto insurance companies are using telematics to gather driving patterns and better quantify risk. Banks are rolling out deposit and more elaborate mobile functionality. Retailers are trying out soft POS, scanners in fitting rooms, facial recognition to prioritize VIP customers, depth sensors to monitor customer reaction to products on aisles and more.  Governments are looking at surveillance video analytics and wearable technology for first responders. Auto companies are testing out all kinds of natural UI – eye tracking, voice response, haptic feedback.

Every industry has unique nuances which established ERP, CRM and other established category vendors are missing out on. While many are in froth this week about SAP’s direction for ByD, personally I would love to see them deemphasize that ERP retread and focus on the newer opportunities above.

More churn. Opportunities for many, challenges for others.

Like Obi-wan I felt a million voices suddenly crying out –but many were in excitement at the coming changes.

One response to “I felt a great disturbance in the Force..”