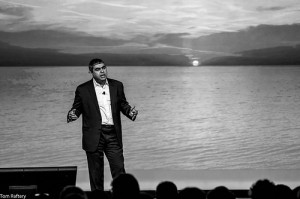 This week at SAP TechEd we got the clearest statements yet that the software giant is embarking on another fundamental architectural revolution. The core message – from now on everything the company builds will be designed to take advantage of in-memory computing, based on the company’s HANA architecture.

I like to describe the history of tech as a repeating pattern: implement, re-implement, rinse and repeat. Every few years a tech wave comes along that requires a fundamental rethinking of application and systems architectures. There is nothing new in IT other than implementation details.

SAP represents this trajectory canonically, in terms of the transition from mainframe to client/server, from SAP R/2 to SAP R/3.

Tech revolutions can be viewed through various lenses – as series of transitions in user interface models, for example – but invariably these revolutions are underpinned by improvements in storage and memory technology- consider the transition from punch cards to tape and tape to disk, and now to disk to solid state storage.

And so it is that SAP embarks on the next big transition, to a world where everything is based on in-memory computing. SAP isn’t waiting for the transition from disk to solid state first. It is doing the Wayne Gretsky thing.

With a storage revolution where do you begin but a database?

SAP HANA began life as a project by SAP co-founder and major shareholder Hasso Plattner to build an in-memory text processing engine. The results were impressive enough in performance terms that Plattner decided to take the next step- moving on to the creation of a columnar database running in memory. The results were this time impressive enough that Hasso wanted to get back in the game of of building enterprise software at scale.

Timing is of course everything. With the market declaring SAP was no longer an innovator, with customers angry at changes to licensing terms which looked as if SAP has decided to sweat existing assets and customers with maintenance charges, rather than innovating, with new market entrants such as salesforce.com dominating in the cloud, SAP needed major surgery.

And so Plattner nudged his way back into active management, pushing SAP back its roots as an engineering company of the German School. The guy tasked with leading the charge was SAP CTO Vishal Sikka.

Revolutions of course, are painful and there will be collateral damage.

SAP’s Business ByDesign play to create a suite for the mid-market from the ground up is now looking like collateral damage. This news story makes brutal reading – claiming SAP spent 3bn Euros on ByDesign for a return of fewer than 500 customers. I have written before about HANA and the High Cost of Low Volume.

ByDesign is just too slow for the new era of high performance. Like I say, timing is everything. ByDesign now looks like SAP’s last stand of the last client/server era. While nominally a Software as a Service app, it was designed to run on x86 servers from 2005, with attendant memory and storage.

In terms of integration of components, with solid separation of concerns, and significantly reduced redundancy versus the broader R/3 era suite ByDesign was to some extent a technical triumph. It was however implemented for the past, not the future, and as such its going to be implemented again… on HANA.

But then again, so is everything in the SAP portfolio.

As Sikka said in his confident keynote:

“We are steering into this disruption… Every technology is coming to HANA. We can achieve a dramatic simplification. Get rid of the redundancy. the artifacts of inefficiency, getting rid of all this complexity.”

Sikka used a lovely metaphor to explain his thinking – the Tesla.

When you look at one, and start comparing it with a normal car the difference is stark. The Tesla is not like a Toyota Prius, a half way house on the way to the electric, digital future. It is the future.

“When you have a look around there is nothing there. Where is the Engine? The paradigm of HANA is like this. all the moving parts are gone, replaced by solid state, non-moving things.”

I think I made pretty solid use of the same metaphor in this video. You should watch it. Although the point I am making is that hybrid has a role to play.

In this case its Salesforce.com that looks more like the Prius than the Tesla. SAP is going to rewrite everything for the new storage and database era. Salesforce.com on the other hand, the erstwhile innovator, recently signed up to a nine year deal to keep running on Oracle database.

There will be collateral damage in a variety of its ecosystems as SAP doubles down on a new architecture, but now it looks more like a technical leader again, rather than a company trying to keep up with industry changes.