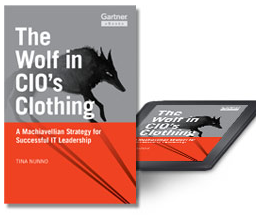 My EI colleague Michael Krigsman pointed me to a new Gartner eBook The Wolf in CIO’s Clothing.

Author Tina Nunno says “Over the course of my career working with CIOs and other executives, whenever I encountered particularly strong CIOs, I consistently asked what had inspired them and enabled them to grow their strength and effectiveness as a leader. A startling number of them had studied Machiavelli and practiced his teachings.”

I like the premise of the book – “how CIOs and IT leaders can adjust their leadership styles in extreme situations for their own success and that of their teams.” And in many situations her advice would be spot on – when a CIO has to ruthlessly consolidate a fragmented portfolio of data centers or applications.

But in many ways the CIO, in many organizations, is not in much of a position of strength to play many games

a) SaaS, IaaS on corporate charge cards, BYOD – three very visible symptoms where the CIO has not been able to dictate IT standards

b) 80 to 90% of IT and telecom spend in many organizations is with outside vendors. The CIO may have the budget, but not the headcount, and frankly many of his executive peers think the CIO has a dangerous dependence on so much in external resources.

d) As enterprises embed technology in their products and services, they often leverage their product engineering or R&D groups not IT. As they move to digital marketing, the social, mobile spend is often with the CMO, not IT. So front office, revenue centric tech is often being done without IT.

e)  Many executives are worried – actually petrified – about security, data protection, compliance issues. They want their CIO to be a rock of stability, not rocking the boat.

The good news is there is a growing band of strategic CIOs who are moving their IT from what I call “systems of record to systems of advantage”. Chris Murphy regularly profiles many of them in his Global CIO section of InformationWeek. The ones I profile in my innovation books and New Florence blogs.

I am sure these CIOs deal with bare knuckles politics in their enterprises. But I think where they get their power from is the “wow” they are delivering, not from their back smoke room politicking skills.

I found the book a fascinating discourse on organizational politics – frankly, you could substitute VP of Marketing or CFO for CIO and apply some of the guerilla and other tactics she elaborates. In many ways, those executives are better positioned than the CIO to be the “wolf” Tina advises them to become.

One response to “The Machiavellian CIO”