What Most Digital Strategy Underestimates: Scale and Interconnected Change

Over the last couple of years, I’ve been advising IT and business leaders that they need to gear up their digital/social/mobile strategies to match the advances taking place in the technology world today. On its face, this only makes sense. Technology change continues to accelerate and the growth in the cloud, social media, mobility, big data, and just about everything else is increasingly off the charts as I recently presented to a group of CIOs. As JP Rangaswami once said, we have to design our organizations now so that change is an integral function of how they operate.

Unfortunately, most organizations largely haven’t done this effectively for a variety of reasons. For one, it’s surprisingly difficult to do if your business wasn’t built around high technology from the outset. Frankly, since so many other organizations are having a hard time with it as well, the competitive implications haven’t always been severe.

However, that also doesn’t mean that some organizations aren’t failing outright through poor digital adaptation. Some clearly are, and the closer technology is to how you do business, the riskier slow digital transformation is. Just ask Blackberry, AOL, Borders, R.H. Donnelly, or a long list of companies that haven’t adapted to how digital innovation transformed their industry.

In the last few years, consumerization has emerged as a leading force in most organizations that is driving emergent, grassroots-led tech change due to increasingly pent up internal demand. The signs are all there: Bring-Your-Own-Technology (BYOD, BYOA), Facebook as the largest enterprise collaboration platform, app stores as the easiest + cheapest IT department alternative, and the list goes on. This pressure — combined with the inherent complexity in moving more swiftly towards adopting new technology — by the various stakeholders of most businesses has become increasingly untenable, even with consumerization taking some of the pressure off around the edges. 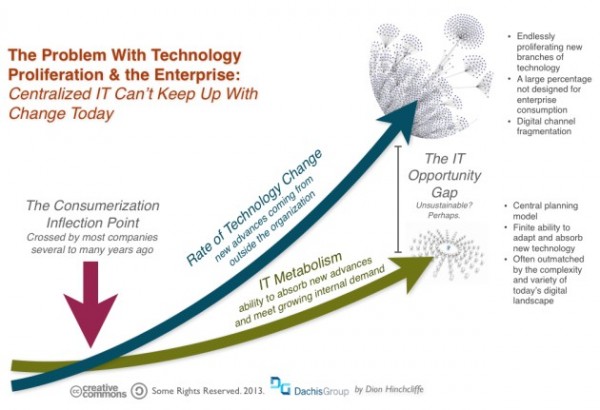 Yet somehow, many large organizations are currently sustaining it, despite being greatly outmatched by the growing chorus of “more” they get from their workers, customers, business partners, and the marketplace. To keep their spot on the treadmill, some organizations are now looking for new models to keep all of this sustainable. But I believe what we’re now starting to realize what one of the core obstacles is: Identifying the best way for businesses to leverage the vast existing resources they already posses, and then devising and realizing fundamentally new ways to use them to engage at scale across today’s digital channels and ecosystems.

Recently, organizations have also starting to make significant changes in how they are organized around technology. The whole conversation about the new role(s) of the CIO, the CMO, and the new Chief Digital Officer are taking place in many industries today. Some of this discussion has started to be effective, and with so many companies struggling to successfully grapple with the torrent of digital innovation today, the window perhaps hasn’t closed.

So now I believe it’s time to tell a more nuanced story. Technology famously drives the leaders and laggards apart. For every Apple, Google, or Facebook, there are many generations of legacy enterprises trying to adapt their old businesses to the new digital landscape. A few lucky ones are protected by regulation, geography, or other happenstance, but most are exposed to the raw digital winds of change. Only a few are making it across the digital divide, while most have reached the limits of growth given the lens through which they originally built and now operate their businesses. But I believe there is a little breathing room, despite the hundreds of digital startups being launched each year to reinvent how we live our lives and conduct our business in radically improved new ways that also upend our existing business models (see the fast growing and rather exciting collaborative economy story for more examples of imminent disruption for many traditional enterprises.)

Large companies still retain very significant ecosystems, resources, and network effect if they are willing to use it. While it’s later than many companies think (just one example: a quick look at what’s most popular in the Apple or Android app stores right shows little presence by today’s Fortune 500, despite mobile’s dominance in today’s world), there are ways to close the opportunity gap with digital. However, at this point, these must be major initiatives at the top of the organization, being led by new business units and IT both. They will have a high rate of failure (just like startups do) but by addressing the scale of the challenge head on, and applying the now many lessons learned we have at our disposal. A great new piece of research from McKinsey highlights this challenge, by asking “how [enterprises can] get beyond the small share of the prize they are capturing today in digital by looking for impact across the whole value chain.”

Most organizations need to update their digital strategies much more often they are, updating their core business models, and make them highly interconnected and organically structured. But they also need to inject the solution to digital scale and velocity deeply into their operations. Those that do this well can become the digital leaders and not the legacy laggards.