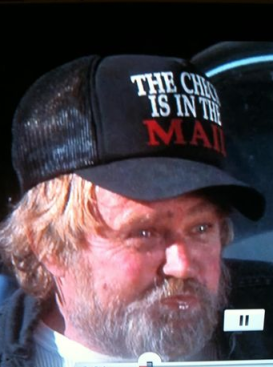 We’ve talked a lot on SaaStr about how to make that critical hire: the VP Sales.  I’ve done it right, and I’ve done it wrong.  When it’s good … it’s just so good.  It all clicks.  But when you make a mis-hire, it’s about the worst mis-hire you can make.  Because you’ll lose not just some incremental revenue, but potentially far more.  All the second-order revenue you could have had (6x the initial lost revenue).  You’ll end up with a crummy sales team under a mis-hire.  And you’ll get lost.  You can end up in a Year of Hell.

So I’ve tried to help here.  We’ve posted a script to use when interviewing a VP Sales.  A guideline to what phase and type to hire.  And lessons learned on what a VP Sales really does.

Even with all that …

You may screw it up.  In fact, the majority of first VP Sales in SaaS companies don’t make it 12 months.  Recently, the team at Salesforce asked me to present at Dreamforce on not just how to hire a VP Sales — but also how to fire one.  Which got me thinking about key ways to figure it out — fast.  You can see some of my slides below (you’ll have to come to Dreamforce to hear it all).  So let’s dig in on how to know when you’ve made that mis-hire.

So let me tell you how you can figure it out — fast.  People will disagree, especially those without a background in managing a great VP Sales.  Your Board and investors may challenge this.  Your colleagues may as well.  But bear with me … you’ll see I’m right.  That you’ll know in 30 days.

How is this possible?

First, let’s step back to our checklist of what a Great VP, Sales really does.  Job #1 is Recruiting.  Bringing in an amazing team that can sell under him or her.  And constantly recruiting.  Because you’ll need 2 more reps, then 4 more, then 8 and 16 and 64 more reps … to hit your compounding revenue plan.  You’ll need the heads.  And the Great VP, Sales all know this from experience. 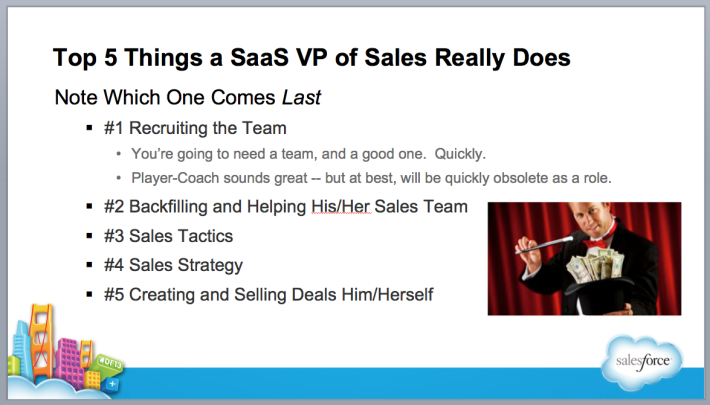 Why?  Because all the great ones not only know this is job #1, but because they know it — they are always cultivating a few great reps to bring with them.  In fact, the Great VPs of Sales often show up with a few great reps in tow for this very reason.

And if they haven’t for some reason (a bit of a fail right there) — they know that’s job 1 on Day 1, to get two more great reps in ASAP.  So one way or another, they’ll bring in at least 2 Great Reps in the First 30 Days.

And Here’s Test #2:  Did Your VP Sales Get Rid of the Worst Rep You Have in the First 30 Days?

You know what the mediocre VPs of Sales do?  They tell you they need every warm body.  That they can’t afford to get rid of Can’t Close Bob, as bad as his numbers are.

And it’s true.  The mediocre VPs of Sales can’t afford to get rid of Can’t Close Bob.  But the great ones don’t need Can’t Close Bob — at all.  They immediately show him the door.

OK so those are the tests for Job 1 – Recruiting and Team Building.

Next Up are the Tests for Job #2:  Backfilling and Improving the Team.

The bottom line is you can figure out if your VP Sales is good enough based on revenue in about 90 days — It’s True.  How?  90 Days Isn’t Enough to build up the pipeline, you say.  Fair enough.  90 Days Isn’t Enough to See the Results of My Fancy New Processes?  True, to some extent.  But the thing is, it’s plenty of time to do Better Than We Were Doing Before.

When your VP Sales comes in, hopefully, you have something in the pipeline, some in-bound leads, some sort of mini-engine.  Maybe it’s just a sputtering 1 cylinder engine … but something.  Something to improve.

Test #3: So a Great VP Sales will tune that engine immediately, and so you’ll see faster revenue growth in just Half a Sales Cycle — and materially faster growth in Just One Sales Cycle.  You’ll see momentum, more deals in demos, more draft contracts going out, halfway through your sales cycle.  And by the end of Just One Sales Cycle (say 90 days) … you should see real revenue improvements.  Quantitative improvements of more deals closed.  And more deals about to close.

It almost has to happen that way, if the VP Sales has made the people improvements we talked about above.

My Real VP Sales doubled sales in 90 days for this reason.

You shouldn’t expect quite those results.  But, you should see real revenue progress in Number of Days = Average Sales Cycle.  Or faster. 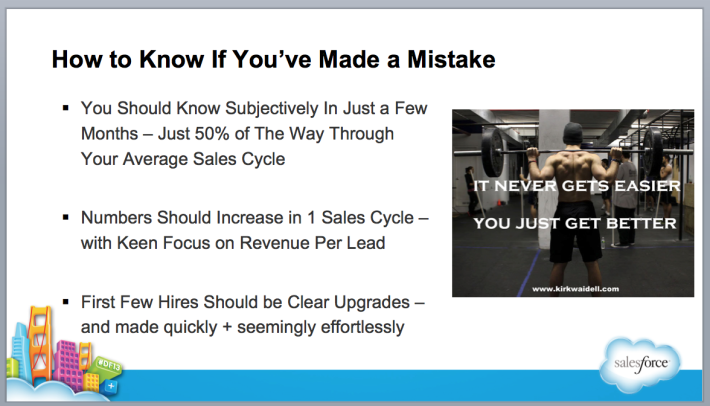 And don’t listen to your Board or Advisors either — if they haven’t done it themselves.  They’ll tell you to give it more time.  And they will be very, very wrong.

Because if it isn’t working in 30 days, then you haven’t really hired your true VP Sales.  Find her.  It was the best hire I ever made.